Scientists find ultrasonic calls of bats also serve a social function This new study by scientists at the Smithsonian Tropical Research Institute suggests that echolocation calls also serve a social function–bats listen to the ultrasonic calls of other bats to identify roost mates, bats of the same species, members of the opposite sex and intruders to their territory. 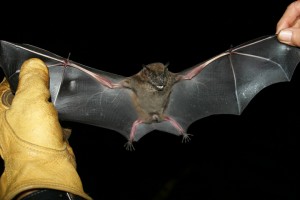 Smithsonian scientist discovers two new bat species hiding in museum collections for more than 150 years While studying bats recently at the Academy of Natural Sciences in Philadelphia, Smithsonian mammalogist Kristofer Helgen discovered a new species of flying fox bat from Samoa in the Academy’s collections that had been preserved in alcohol since 1856.

Newly discovered Madagascar spider spins largest, toughest webs on record Darwin’s bark spider cast giant webs across streams, rivers and lakes, suspending the web’s orb above water and attaching it to plants on each riverbank. Bridgelines of these water-spanning webs have been measured as long as 25 meters.

Tiny, new brains prove just as adept as large, mature brains among tropical orb-web spiders When it comes to brains, is bigger better? Can the tiny brain of a newly hatched spiderling handle problems as adeptly as the brain of a larger adult spider?

Drugged spiders’ web spinning may hold keys to understanding animal behavior “Spinning under the influence” is one way to describe recent activities in the Costa Rican laboratory of Smithsonian scientist William Eberhard. An entomologist at the Smithsonian’s Tropical Research Institute, Eberhard recently carried out a series of experiments in which he observed the web-building behavior of dozens of spiders under the influence of drugs—specifically, a chemical injected into their bodies by parasitic wasps. 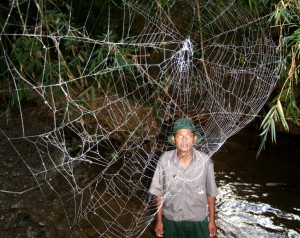 Females are giants in newly discovered species of golden orb weaver spider Native to Africa and Madagascar, females of the species have a body length of 1.5 inches and a leg span of 4 to 5 inches. Males are tiny in comparison.