While studying bats recently at the Academy of Natural Sciences in Philadelphia, Smithsonian mammalogist Kristofer Helgen discovered a new species of flying fox bat from Samoa in the Academy’s collections that had been preserved in alcohol since 1856.

That discovery inspired him to study early Samoan collections in other museums more closely, leading Helgen to discover a second new species of flying fox bat in the collections of the Smithsonian’s National Museum of Natural History in Washington, D.C. This specimen had been collected in Samoa even earlier than the first, between 1839 and 1841, and had been mislabeled as a different but similar species. 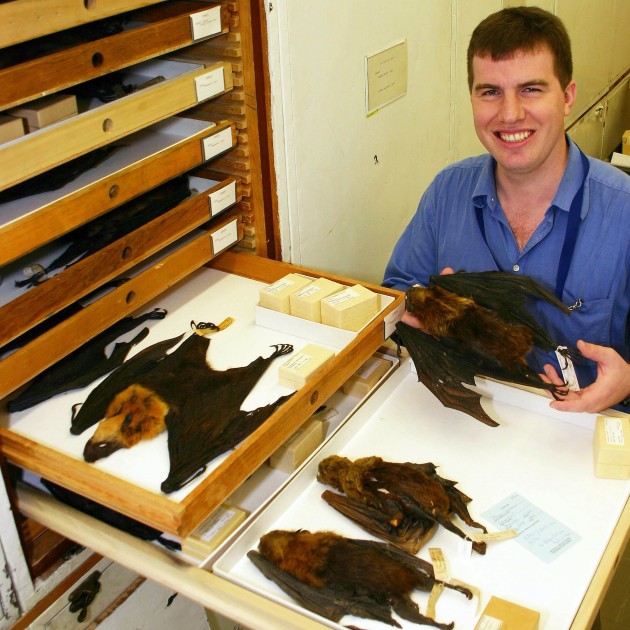 Photo: Kristofer Helgen with specimens of flying fox bats in the mammal collections of the Smithsonian’s National Museum of Natural History.

Both species of these newly discovered bats were very large, with wingspans of approximately two and three feet, respectively, and are now believed to be extinct.

The first specimen was collected on the Samoan island of Upolu in 1856 and had gone virtually unnoticed in the Academy of Natural Science’s collections since that time, says Helgen, a curator at the Smithsonian’s National Museum of Natural History. Helgen had traveled to Philadelphia specifically to study other kinds of mammals, but it was the bats in the Academy’s collection that grabbed his attention.

“I found this bat in my first hour at the Academy,” he says. Its small body and teeth immediately drew the attention of Helgen, who is an expert on flying fox bats. Drawing on features of the specimen’s skull, teeth and other body parts, Helgen, and his colleagues, Smithsonian mammalogist Don Wilson and museum specialist Lauren Helgen, determined the long-preserved specimen was a species unknown to science. They gave it a new scientific name, Pteropus allenorum.

During the meticulous study of P. allenorum, the scientific team compared its morphology to that of dozens of other flying fox bat specimens in natural history collections around the world—including London, Paris, Berlin, and the United States. It was at this time that Kristofer Helgen discovered a second new Samoan bat species, represented by two specimens in the collections of the Smithsonian’s National Museum of Natural History.

“The distinctions that set this second new species of Samoan bat apart were more subtle than the first,” Helgen says. “Basically all of the teeth of this specimen were larger, particularly the canine teeth; the jaw was much more robust, the skull larger and the muscles involved in chewing bigger.” 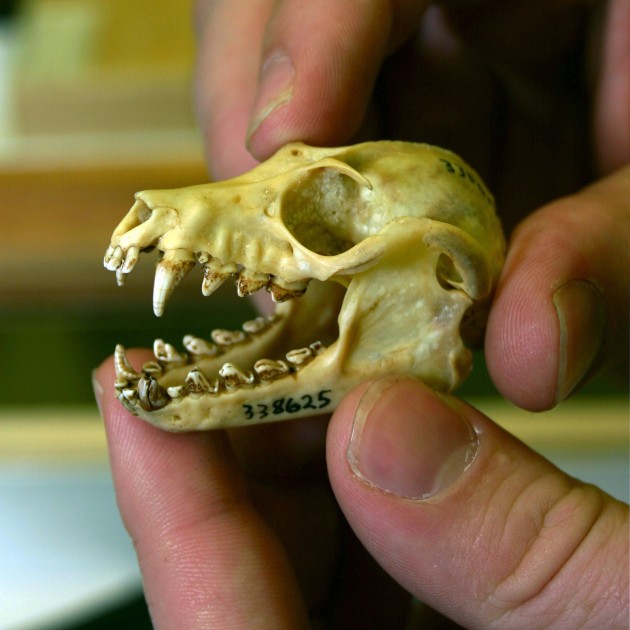 Photo: The skull of a flying fox bat from the Smithsonian’s mammal collections. (Photos by John Barrat)

All flying fox bats are herbivores, Helgen says, and the larger jaw and teeth of this bat indicate that it fed upon hard nuts or really thick skinned fruit.  Helgen and his colleagues gave this second new species the scientific name Pteropus coxi; it is the largest kind of bat known from the Polynesian region.

Both new bat species were described in a recent article in American Museum Novitates, a scholarly journal from the American Museum of Natural History in New York. No other specimens of these species are known.

Because they are capable of flight, bats were the only mammals to naturally colonize many of the more remote islands in the southwest Pacific, Kristofer Helgen says. The European discovery and arrival of new influences to Pacific islands in the 1700s and 1800s accelerated the extinction of many native vertebrates, such as birds, lizards and bats, causing many species to go extinct soon after their discovery.

“In forests bats serve a critical role as seed dispersers and plant pollinators,” Helgen says. “It is interesting to consider how the forests of Samoa may have changed with the extinction of these two bats. It is unlikely that the two species of flying fox bats we know still live in Samoa are dispersing the seeds and pollinating the flowers of all of the plant species that these two extinct bats once did.”