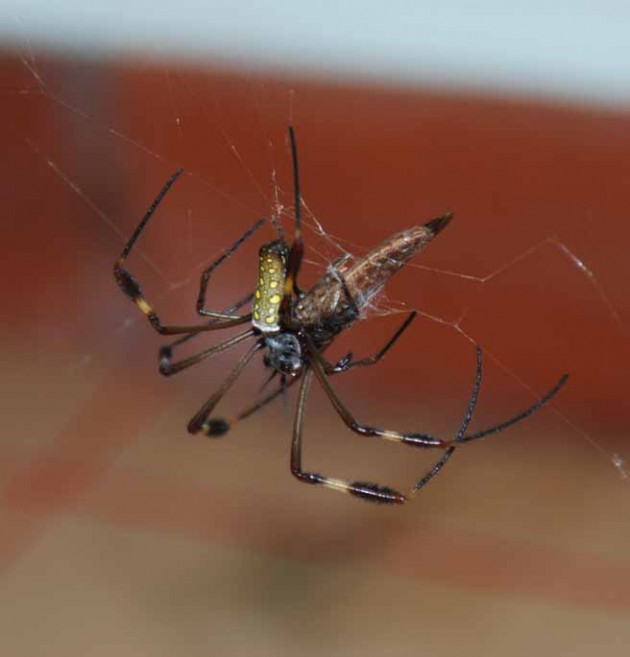 An adult Nephila clavipes on its web with an insect it has captured.

When it comes to brains, is bigger better? For instance, can the tiny brain of a newly hatched spiderling handle problems as adeptly as the brain of a larger adult spider? One theory, known as the size limitation hypothesis, predicts that the miniscule brains of tiny creatures contain fewer neurons and thus have less capacity, making these creatures more prone to mistakes. 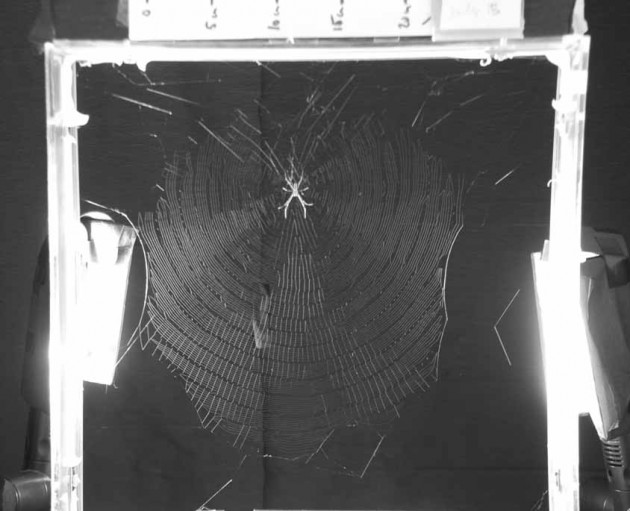 The web of an E. illicita spider in the wild. (Photos by Thomas Hesselberg).

To test this theory, Thomas Hesselberg of the Smithsonian Tropical Research Institute in Panama, recently examined and compared the designs of webs woven by newly hatched, mid-size and adult orb-web spiders of the species Nephila clavipes and Eustala illicita. (Nephila grow explosively and an adult can weigh up to 500 times more than it did when newly hatched.) He collected a number of spiders from each age group, induced them to weave webs on square frames in a laboratory and then took careful measurements of each web. He also conducted observations of the webs of both species in the wild. A paper on Hesselberg’s work was published recently in the scientific journal “Ethology.”

Orb-web spiders have a fixed reserve of sticky capture spiral silk inside their bodies prior to web building. This reserve is thought to be entirely used up as the web is completed. “As orb spiders build the capture spiral from the outer periphery towards the hub [or center of the web], they need to match web size to silk reserves,” Hesselberg writes. Younger spiders that haven’t mastered this behavior, he reasoned, should have a larger area free of silk at their web’s center hub. Or, to cover for a miscalculation, a young spider may increase the distance between the spirals of its capture silk spun out nearer to the web’s hub. 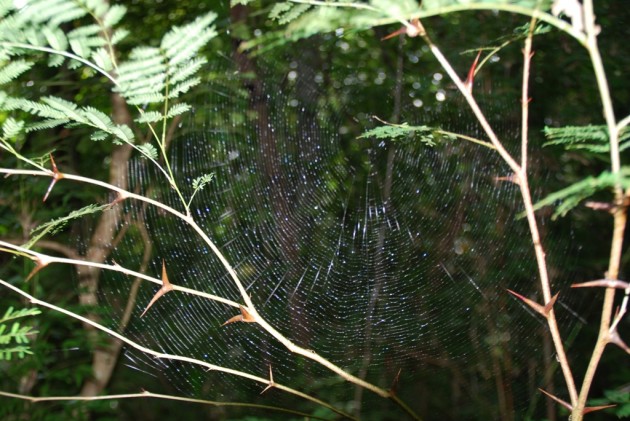 An N. clavipes resting at the hub of its laboratory web.

In his observations of the different webs, he found no evidence that adult Nephila or Eustala spiders have any more brain power or build webs any more effectively than newly-hatched spiderlings. “Neither species showed clear signs of being behaviorally limited or more prone to committing errors as spiderlings than were older juveniles or adults,” Hesselberg concluded.

One miscalculation may lie, Hesselberg adds, in the human assumption that “the orb web is the result of a demanding computational behavioral process. Theoretical models suggest that the construction of the orb web might be achieved by following a few simple rules of thumb and thus not pose any significant computational challenge for the spider.”