New research on tiny spiders has revealed that their brains are so large that they fill their body cavities and overflow into their legs, say a team of scientists at the Smithsonian Tropical Research Institute in Panama.

As part of ongoing research to understand how miniaturization affects brain size and behavior, the researchers measured the central nervous systems of nine species of spiders, from rainforest giants to spiders smaller than the head of a pin. As the spiders get smaller, their brains get proportionally larger, filling up more and more of their body cavities. The discovery was announced in the journal Arthropod Structure and Development.

The brains of small spiders, such as those found in nymphs in the genus Mysmena (shown here), extend out of their body cavity into their legs. Click to enlarge. (Image courtesy William Wcislo)

“The smaller the animal, the more it has to invest in its brain, which means even very tiny spiders are able to weave a web and perform other fairly complex behaviors,” said William Wcislo, staff scientist at the Smithsonian Tropical Research Institute. “We discovered that the central nervous systems of the smallest spiders fill up almost 80 percent of their total body cavity, including about 25 percent of their legs.”

Some of the tiniest, immature spiderlings even have deformed, bulging bodies. The bulge contains excess brain. Adults of the same species do not bulge. Brain cells can only be so small because most cells have a nucleus that contains all of the spider’s genes, and that takes up space. The diameter of the nerve fibers or axons also cannot be made smaller because if they are too thin, the flow of ions that carry nerve signals is disrupted, and the signals are not transferred properly. One option is to devote more space to the nervous system. 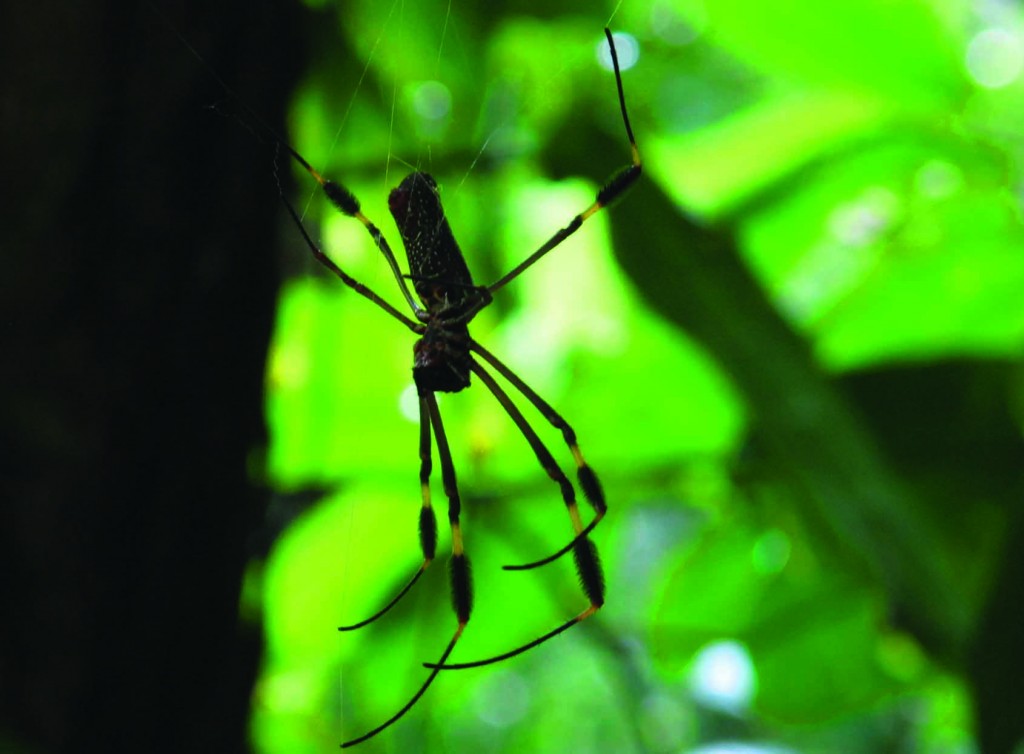 An adult Nephila clavipes, a big tropical spider, has plenty of room in its body for its brain. (Photo by Pamela Belding)

“We suspected that the spiderlings might be mostly brain because there is a general rule for all animals, called Haller’s rule, that says that as body size goes down, the proportion of the body taken up by the brain increases,” said Wcislo. “Human brains only represent about 2-3 percent of our body mass. Some of the tiniest ant brains that we’ve measured represent about 15 percent of their biomass, and some of these spiders are much smaller.”

Brain cells use a lot of energy, so these small spiders also probably convert much of the food they consume into brain power.

The enormous biodiversity of spiders in Panama and Costa Rica made it possible for researchers to measure brain extension in spiders with a huge range of body sizes. Nephila clavipes, a rainforest giant weighs 400,000 times more than the smallest spiders in the study, nymphs of spiders in the genus Mysmena.