The real history behind science fiction’s ‘2001: A Space Odyssey’ 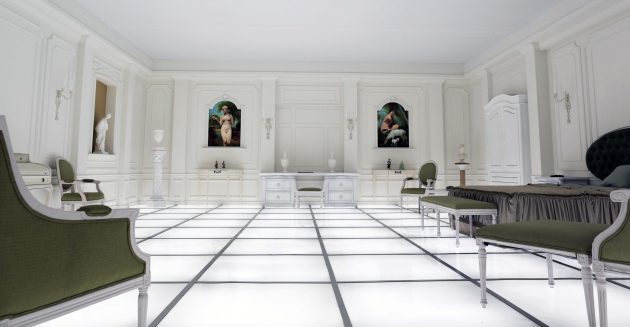 “The Barmecide Feast,” an immersive art installation at the National Air and Space Museum, is a fully realized and full-scale reflection of the neo-classical hotel room from the penultimate scene of Stanley Kubrick’s and Arthur C. Clarke’s landmark film, “2001: A Space Odyssey. ” (Photo courtesy 14th Factory)

When “2001: A Space Odyssey” premiered April 2, 1968 at Washington, D.C.’s Uptown Theater—not far from the Smithsonian’s National Air and Space Museum—not everyone was a fan. While some critical reviews were lukewarm, it went on to become the highest grossing film of the year.

The film’s legacy endured as part of U.S. culture for 50 years. It’s become part of the National Film Registry and the Smithsonian’s collection, where it helps tell the history of spaceflight through the lens of those on Earth.

Martin Collins, space history curator for the National Air and Space Museum, can’t remember the first time he saw the film, based on a short story by Arthur C. Clarke and a screenplay by Clarke and director Stanley Kubrick. But Collins will never forget when he traveled to Sri Lanka in 2014 to collect about 75 boxes of materials from Clarke’s trust that had been donated to the museum.

Clarke’s substantial archive included scientific papers, notebooks, correspondence and drafts that spanned his lifetime. Collins and his colleague Patti Williams had the task of preparing it all for cataloging and shipping back to the U.S. 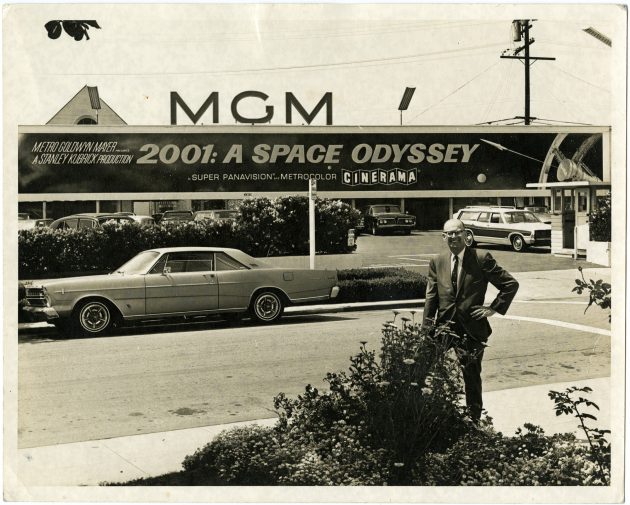 Arthur C. Clarke poses for a photo beneath a sign advertising the motion picture “2001: A Space Odyssey,” May 16, 1968. A Ford Galaxie 500 is parked on the street behind Clarke; other cars are visible in the lot in the background. (Image courtey Arthur C. Clarke archives at National Air and Space Museum, NASM-9A13527)

Among the thousands of documents were also hints of Clarke’s wry humor.

“In his bathroom, on the wall in front of the toilet was a poster from the bathroom on the space station, a 10-step guide on how to properly use the restroom in space,” recalls Collins.

For fans of “2001: A Space Odyssey,” a full-scale recreation of the iconic, neo-classical hotel room in the film’s penultimate scene has landed at the National Air and Space Museum through May 28.

Originally created by Simon Birch for an art installation in Los Angeles, the set was disassembled, shipped and reassembled in the museum.

In the installation “The Barmecide Feast,” the floor glows an eerie white, and the normal echoes from the high ceilings are muted. For visitors stepping into the stark room, there’s no mistaking this installation is unlike any other at the National Air and Space Museum.

“Temporary exhibitions have been a modest part of our offering,” Collins says, “yet they are a particularly effective way for the museum to highlight unusual specialized subjects that show people the dynamic nature of the subject matter. … Cool is a good factor too.”

Some visitors might find it surprising to stumble upon this immersive installation at the museum, but Collins points out the museum has an extensive art collection, much of which is devoted to space exploration.

In Clarke’s handwritten notes and journals, Collins gained insight into how the writer viewed his fictional work and its impact on the real world. 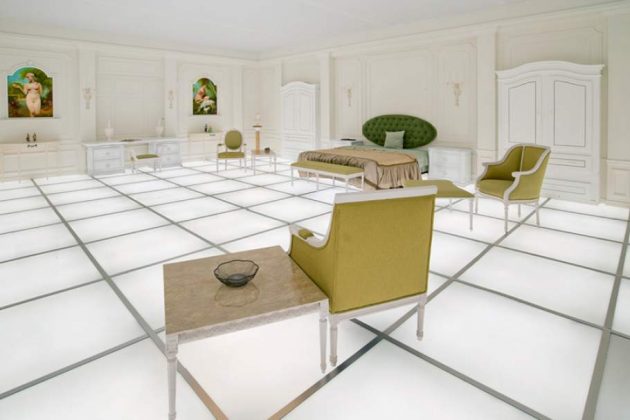 “The Barmecide Feast” was conceived by Hong Kong-based British artist Simon Birch, and built with help from Paul Kember of KplusK Associates architectural firm. Two of Kember’s uncles worked as draftsmen on 2001, designing and drawing the painstakingly detailed original set.

“He thought about science fiction as a critical tool for helping people think about what the future held,” Collins says. “Not just how space exploration could affect our social-cultural life, but how changes we were experiencing through science, technology and space exploration might fundamentally change us as humans.”

“2001: A Space Odyssey” is about the future direction and character of humanity, Collins explains.

“For me, getting familiar with Clarke was a critical variable to appreciating the movie,” he says.

The National Air and Space Museum collects and studies popular culture along with artifacts. These pieces—like the “Star Trek” Starship Enterprise studio model or “Star Wars” action figures—reflect people’s views on space travel at a moment in history. While they are created from fantasy stories, they had an effect on advertising, media, design and consumer goods that existed in society.

A few items from Clarke’s archive line the wall leading into the “The Barmecide Feast,” giving visitors a reminder of the strong connection between pop culture, science fiction, art and technology.

“The Barmecide Feast” runs through May 28 at the National Air and Space Museum. Access to the installation is free, but timed tickets are required.