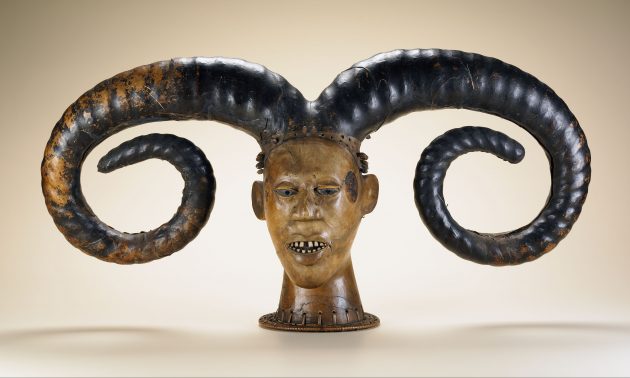 Diverse, dynamic and by turns fierce and delicate, “Visionary: Viewpoints on Africa’s Art,” a new exhibition at the Smithsonian’s National Museum of African Art, uses over 300 artworks from the museum’s permanent collection to create a lively introduction to the understanding and appreciation of African art. From Romuald Hazoumè’s huge “Rainbow Serpent” (2007) constructed of plastic jerry cans at the heart of the exhibition to the smallest turtle-shaped gold weight for weighing gold dust, each item delights the senses and together they create an exquisite marriage of form, color, shape, and expression.

This striking exhibition is organized into seven sections that highlight the perspectives of the many people involved with these artworks: the collectors who buy them, the scholars who study them, the artists who created them, the sponsors who commissioned them or who they were created for, the performers who may have used them in ceremonies, the museums that display them, and you, the visitor. Every section is designed to teach a better understanding of the artists’ intent, how the works made an impact and their ongoing lives in collections and museums. 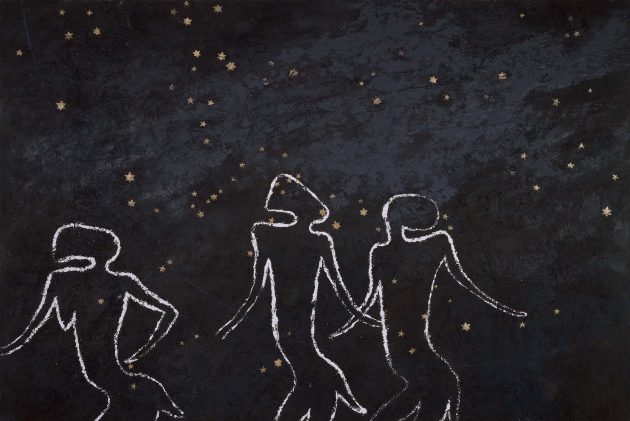 At special stations located throughout the exhibition, visitors are also urged to “look closely” at seven elements artists often use in combination: line, shape, form, value, space, color, and texture.

At every turn, the show demands engagement. Upon entering each new area visitors are confronted by critical questions at eye level in red text. For example, “Why do people commission artworks?”; “What makes a great artist?”; “How do you find the key visual details that reveal many different stories about Africa’s arts?” and “Is there a particular artwork by a Yoruba artist that captures your attention? Why do you think that is?”

The questions are designed to invite visitors into a conversation with the art, explains National Museum of African Art Curator Kevin Dumouchelle, who co-curated “Visionary” with fellow curators Christine Mullen Kreamer and Karen Milbourne. “We wanted to redirect our visitors’ engagement. It’s not just us, as museum authorities, speaking and having the definitive word.” 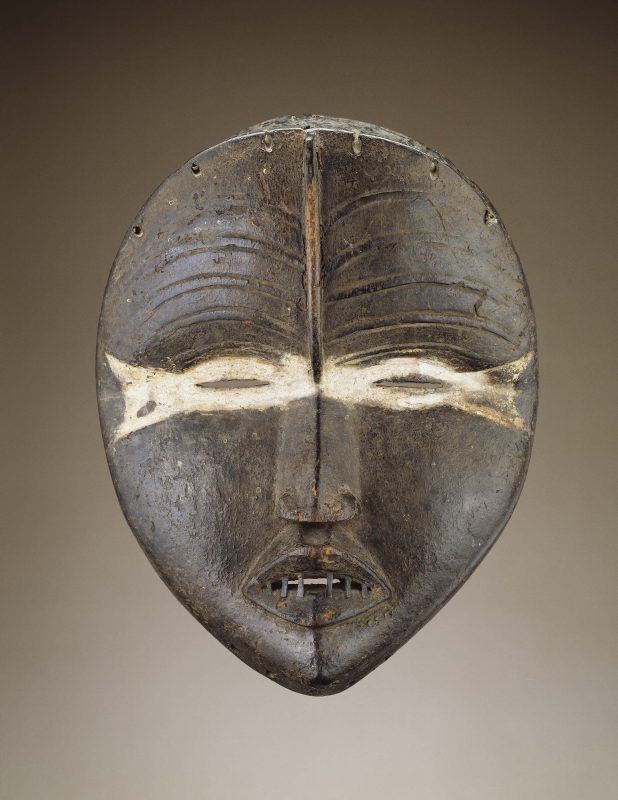 Object labels bring answers. In the performance section, an early-mid 20th century painted wood-and-fiber lion mask made by a Bamana artist from southwestern Mali was used in initiation ceremonies for the Bamana men’s society. Consecrated with sacrificial offerings and periodically washed and repainted, these masks were part of a process that ensured “adolescent boys are instructed in the knowledge, skills, and demeanor required of adults.” Performers wearing the mask imitated the posture of a lion by bending over and supporting themselves with short sticks for forelegs.

Female forms also have a prominent place in “Visionary.” A label accompanying a Luba king’s ceremonial axe in the sponsor section, an emblem of political power in the shape of a kneeling woman, reveals “only a woman’s body is powerful enough to hold the secrets of kingship.” In the scholar’s section, the label for a late-20th century white striated mask created by a Songye artist in the Congo reveals it “served judicial functions and exerted authority over potentially negative behavior. 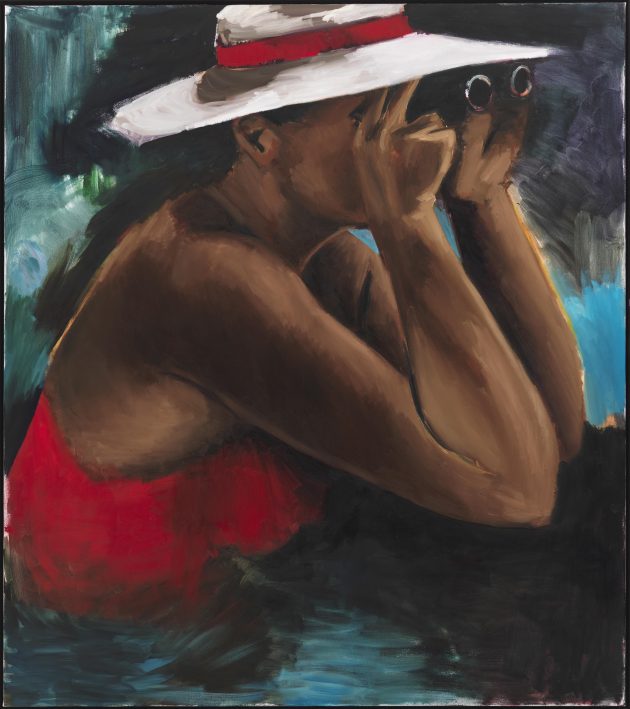 Looking Lab is another feature of “Visionary” designed to deepen a visitor’s comprehension of the art on display. Small stations placed throughout the exhibition explain the seven elements of art, and each one references a nearby artwork that incorporates that element.

One station, for example, reveals that form has three dimensions—height, width, and depth. “Sculptors often employ forms to embody their ideas and enable viewers to walk around an artwork.” At another station, visitors learn “Positive space is the solid area an object occupies. Negative space is the void or empty area, that can be found in both 2-D and 3-D works of art.” 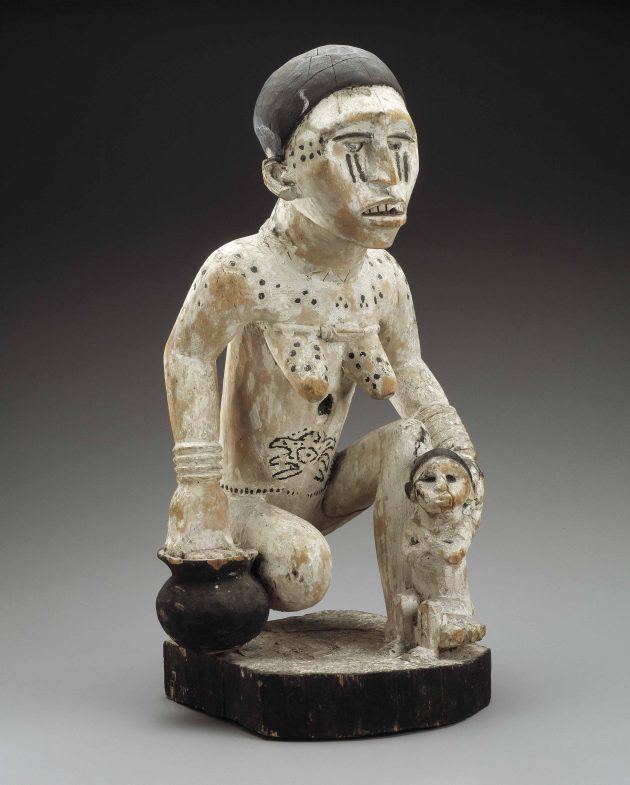 To demonstrate the concepts of positive and negative space the curators refer visitors to a nearby mid-20th century “double female figure,” or “akua’ba,” from the Ashanti Region in Ghana. This two-sided black figurine, made from wood, glass beads, plant fiber, and metal, stands out because of its unusual proportions: one side of the figure has a head that is approximately the same size as its body, while the other side has more typical body proportions.

This figurine wasn’t just created as a lovely and curious thing to look at. Asante women carried akua’ba figures with them as talismans, believing them to ensure healthy pregnancies and children. For the people who crafted these akua’ba figures, they had a real and essential function.

Secretly I Will Love You More, by Andrew Putter, 2007 (Museum purchase)

Dedicated teaching space inside of an exhibition is a new experiment for the African Art Museum, Dumouchelle says, but not a new idea. Deeper consideration of how to engage visitors to stop and really look has been in the ether at the museum for some time.

“The idea is to introduce the visitor–who may never have encountered an African object at a museum before–to an understanding of how to look at an object and give them a variety of access points into ways of having a relationship with these objects. We do that by telling the life history of these objects.”

One of the things Dumouchelle loves about African art, he says, is that these objects have lived such different lives than a Western oil painting, for instance. Most visitors associate art with a painter sitting at an easel; this trope is part of Western culture. Many of the objects in the National Museum of African Art, however, had a very different genesis. 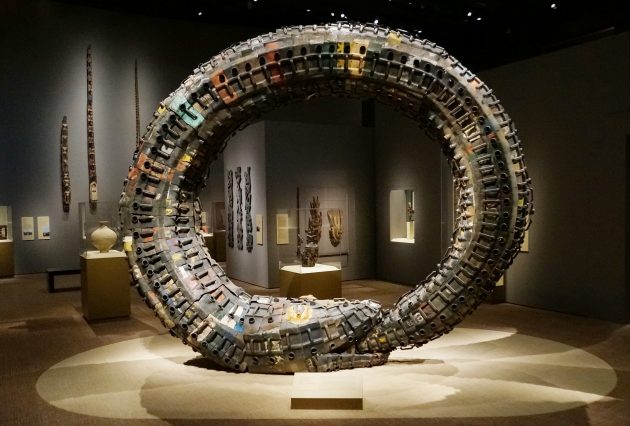 “The best of these objects have great aesthetic intent, execution, and skill,” Dumouchelle observes, “but that wasn’t all they were about. They also had a function.” Because of their functionality, though, many of these types of objects have not yet been fully accepted into the Western canon of art.

They just aren’t objects that many of the museum’s visitors have considered before, and this is why Looking Lab is important. “It’s a way to reinforce for our visitors that yes, these objects are fine art. Those techniques you use to analyze…a Western painting or sculpture can just as easily be applied here.”

It was no small feat to create an exhibition that simultaneously delights, educates, and persuades. Adding to that, the space the exhibit occupies–the second sublevel of the museum–was completely repurposed. 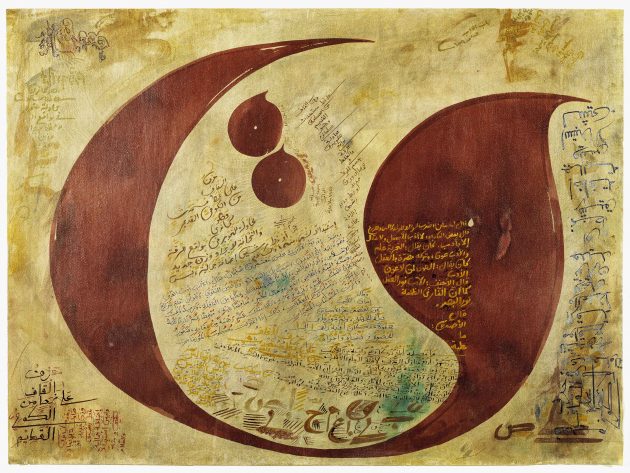 Before “Visionary” was installed, the space was used for various rotating shows. But museum leaders made “a strategic decision to change the purpose of this gallery to focus on the permanent collection, to bring it to the heart of the building and make it the heart of the story we tell visitors,” Dumouchelle says. He describes the show as a “massive undertaking” which required the entire museum staff to work as a team–and also gave them an opportunity to shine.

For example, museum mount-maker Keith Conway has a knack for making finely crafted mounts for every object in a show. When the curators chose a complicated display of small iron rods to feature, Conway used magnets–separated from the objects with a small piece of felt–to get the job done. In doing so, he not only shaved off time from the project but invented a completely new mounting method.

In the performers section, a winding pattern on the carpeted floor guides visitors through the exhibit, infusing a fitting sense of motion into the room. The team was excited about this idea but executing it was another matter. The small staff—production specialists, conservators, and registrars alongside curators—came together to spend hours on their hands and knees cutting up little pieces of carpet. “Not the sort of thing they teach you in grad school,” Dumouchelle recounts.

The transformative and modern essence of African Art is embodied in the artists section at the exhibition’s center by Roland Hazoumè’s sculpture of a serpent swallowing its tail. Its “a powerful symbol connected to fertility, prosperity, and the eternal cycle of life for the Fon and Yoruba peoples of Benin and Nigeria,” its label reveals. Yet by using hundreds of plastic gasoline jerry cans to create this animal, Hazoumè is also drawing attention to the “consequences of oil extraction, the horrors of the transatlantic slave trade, and the continued abuses found in unequal global trade relations.” 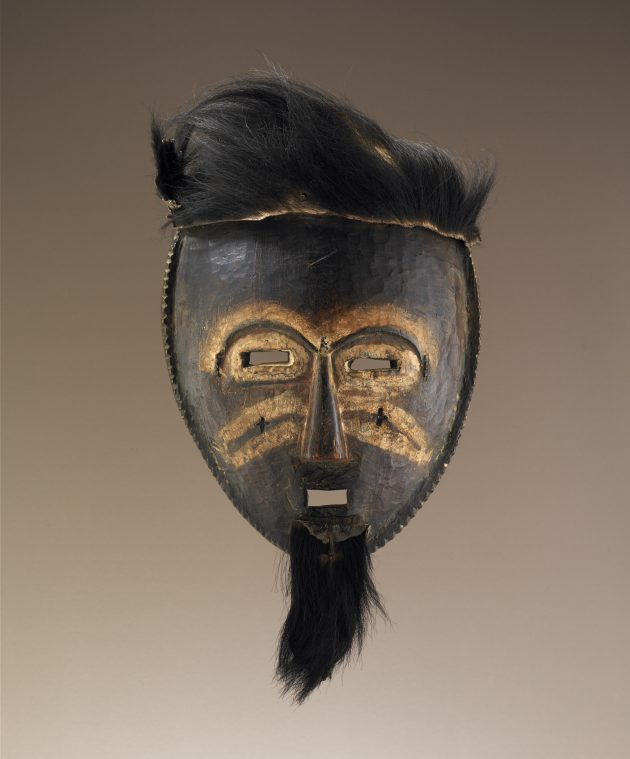 After joining the staff in October 2016, Dumouchelle, a former Brooklyn Museum curator, says “Visionary” was a wonderful way to begin his tenure at the National Museum of African Art. “I got to learn the collection firsthand, but I also had the chance to learn everyone at the museum and their personalities, their roles and their secret hidden talents and strengths,” he says.

No doubt, this stunning and comprehensive exhibition showcases the depth and breadth of the staff’s talent as surely as it showcases the museum’s collection of visionary art. The exhibition confirms at every turn what visitors read going in: “The works of art in the collection of the National Museum of African Art have been made with imagination, insight, and the highest level of skill and creativity to address critical perspectives on universal human issues.”

“Visionary: Viewpoints of Africa’s Art” opened in November and is on view indefinitely.