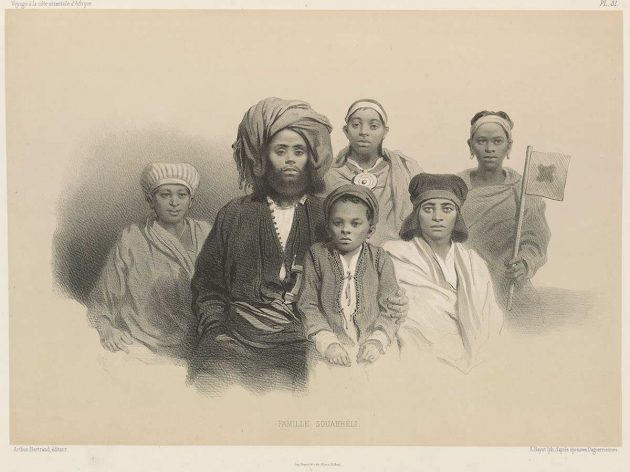 Swahili family. A. Bayot lithograph after Charles Guillain daguerreotype 1846-48, published in Voyage a la Côte Orientale d’Afrique (1848) by Charles Guillain. Featured by the National Museum of African Art (click photo to access) in the online exhibition “Sailors and Daughters,” the atlas has recently become part of Google’s “We Wear Culture” project through the collaboration of the African Art Museum. (Courtesy Smithsonian Libraries, Warren M. Robbins Library)

The East Coast of Africa is a cross-cultural region that is a marvel to traverse. Now, a special journey extending from Oman to Zanzibar is online through Google’s Cultural & Art Institute platform, which tells the story of the style and culture of the Omani, Somali and Zanzibari people.

It is a vivid virtual exhibition created by the Smithsonian’s National Museum of African Art. The exhibition is part of Google’s much larger “We Wear Culture” project, a website featuring contributions from more than 180 cultural institutions from New York, London, Paris, Tokyo, São Paulo and around the world (and including the Smithsonian’s National Museum of African American History and Culture).

The African Art Museum is one of the few institutions representing African fashion and culture on this Google site and its contribution features a compelling line-up of African art, culture and fashion, an original play, a graphic novel, an operetta, a ballet, a cell phone app and two short documentaries.

“The start of this collaboration was an invitation from Google to our museum to be part of the campaign, which brings together cultural institutes from all around the world,” says Eddie Burke, head of communications at the African Art Museum, who oversaw the collaboration. 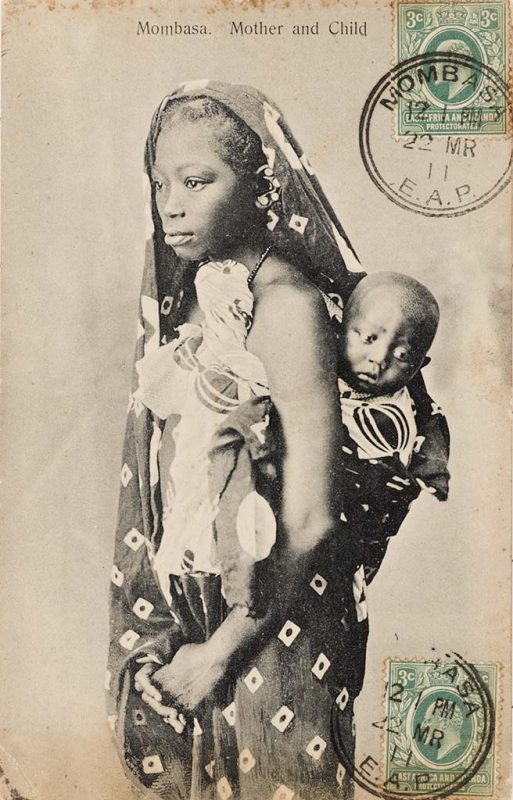 In early 2017, the African Art Museum was approached by Google to help promote the broad story of fashion and culture. At the time, the museum had works of art on view from its “Connecting the Gems of the Indian Ocean: From Oman to East Africa” project that “focused on the cultural differences between East Africa and the Oman and encompassed such things as food, clothing and trade routes between both locations,” Burke explains. “At the same time, we had also just launched an online exhibition focused on East Africa and Oman, ‘Sailors and Daughters: Early Photography and the Indian Ocean.’”

Google and staff from the African Art Museum created three galleries of images based on the two exhibitions that fit the project:

In June Google launched its “We Wear Culture” platform with more than 30,000 artifact images and 400 exhibitions from 180 institutions. The National Museum of African Art’s contributions to this project can be accessed here.

Fashion experts, curators,  designers,  universities, museums and nongovernmental organizations (NGOs) from around the world have collaborated on the Google Arts & Culture project to show that fashion is a part of culture, a form of art and a result of true craftsmanship. Google’s technology, including virtual reality, 360-degree videos, Google Street View and ultrahigh resolution “gigapixel” images vividly highlight the collections and make them available to everyone.

The new Google site also contains images from a 2015 African Art Museum exhibition “Connecting the Gems Project of the Indian Ocean: From Oman to East Africa.”

“In 2013, a dance troupe came from Oman to the African Art Museum for an original performance,” Burke explains, and afterward “we spoke to the country of Oman and to the embassy to express how we would love to continue to collaborate with them.” The discussions ended with a donation from the Sultanate of Oman of $1.8 million to showcase the cross-culture connections, as well as the differences and similarities between Oman and East African arts and culture.

As a result, the African Art Museum created a documentary on Oman and Zanzibar, a coffee-table book, a series of discussions, a graphic novel, presentations, an opera with the University of Maryland, and a ballet in collaboration with Howard University. 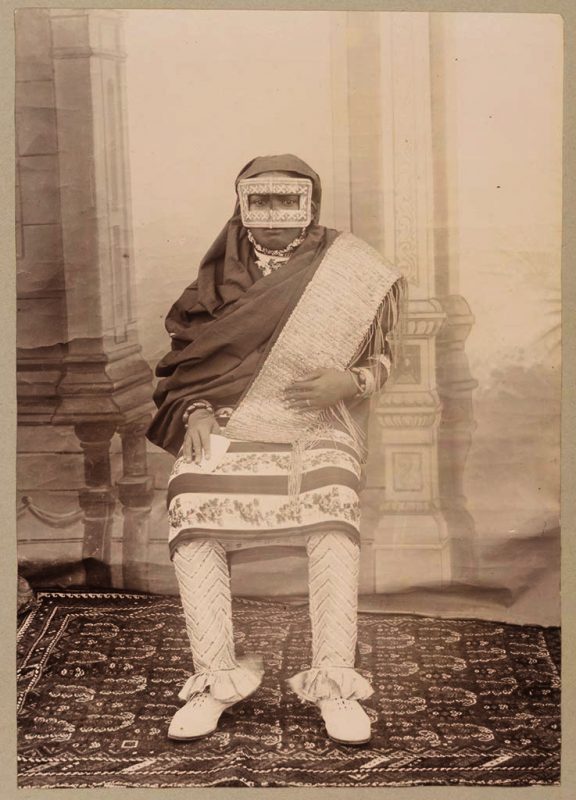 “The adventure lasted for about three years and produced many vibrant and colorful images showing Oman and Zanzibar in a very different way,” Burke says. Many of those images are now also displayed online in Google’s ‘We Wear Culture’ project.

“Connecting the Gems’ is an enchanting trip in the graceful culture of the edges of East Africa. The captivating spirit and belief of Oman, Somalia, and Zanzibar are told through clothing, costumes and jewelry used in the ballet “Hamdan: Through the Gate of Tears” and in the operetta “Qadar (Destiny).” Many beautiful photographs of traditional attire and architecture are also featured.

The purpose behind ”We Wear Culture,” for Google is to show the whole story of fashion, from the Silk Roads to  Marilyn Monroe’s dress, from Khanga clothes to punk areas of London, from 1700s Versailles fashion to today, illustrated through thousands of museum images.

In this image from the African Art/Google collaborative website “Garment and Adornment Expressions of Spirit and Belief in Oman, Somalia and Zanzibar,” a family poses in front of the Sultan Qaboos Grand Mosque in Muscat, Oman. They are dressed in garments reflected by the performers in Hamdan.

“We saw it as an opportunity to increase the visibility of our collection, to let audiences see our works of art maybe for the first time in their life. We also wanted to engage with a larger audience to gain interest in visiting the museum when online viewers come to Washington, D.C.,” Burke says.

“A lot of our followers are here in Washington D.C., but others come from Europe, Asia, and the African continent, and Google is a good platform to bring arts to a broader audience. We don’t necessarily have to show the entire collection online, we can actually curate what we want the public to see and hopefully, they’ll come at some point to see our full collection.”

To promote its participation in the project the museum also launched a social media campaign, “We wanted to be interactive. We called this online campaign ‘We wear culture, what about you?’ Then we published images using the hashtag #wewearculture and encouraged people to send us images of their fashions,” Burke says.

“We received a number of images of people who wore the clothing of our collection, some of them were wearing Khanga and certain traditional Omani textiles. So we had people talking about what they would wear on a daily basis,” Burke says.

Google’s “We Wear Culture” exhibition provides a glimpse of the cultural treasures of this civilization that are part of the collection of the African Art Museum. Online visitors can continue the adventure on the Smithsonian National Museum of African Art’s social media where the museum offers live webcasts and 360-degree video presentations of its fashion collections.