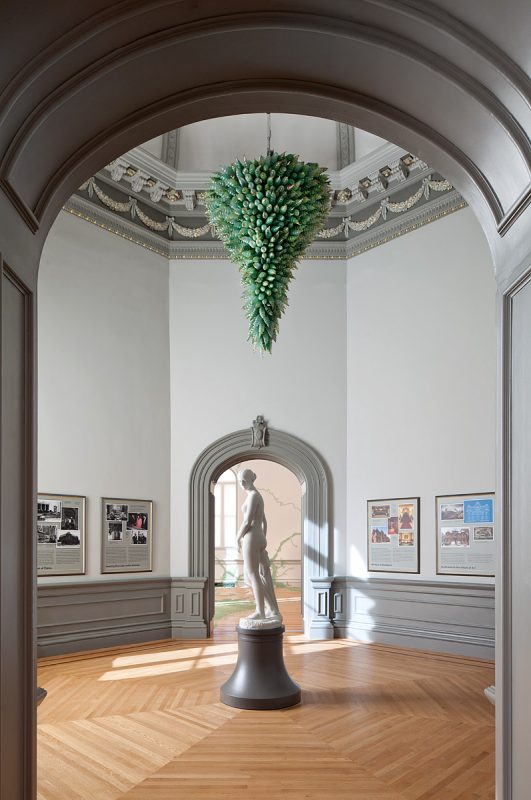 Standing solemnly, violated yet dignified, nude but chaste, in the room William Wilson Corcoran arranged specifically for her, his favorite artwork.

She’s facing away, purposefully opposite on axis from the Smithsonian’s Renwick Gallery’s Grand Salon, its sweeping stairway in between. She was meant to face the window in a time when the primary illumination was sunlight. The opulent silhouette she casts today captures that same ethereal wonder.

Today, in Washington, D.C., three full-size versions of Hiram Powers’ seminal sculpture made from three different materials are on view in three different museums owned by two separate organs of the federal government.

One is a plaster pointing model used to create the first five of six full-scale, lifetime marble replicas that the American-born Powers made in Italy beginning in 1844. (Only four of these five marble sculptures exist today.)

Displayed in the Smithsonian American Art Museum, the plaster is the centerpiece of “Measured Perfection,” a one-room exhibit that uses modern technology and an exploration of old methods to reveal some of the sculpture’s more scandalous secrets.

The second Greek Slave on display in Washington, D.C., is a 3-D printed glass-infused polymer replica of that plaster made as part of the Renwick Gallery’s 2015 reopening, that today stands below a Dale Chihuly glasswork in the building’s Octagon Room just across Pennsylvania Avenue from the White House. 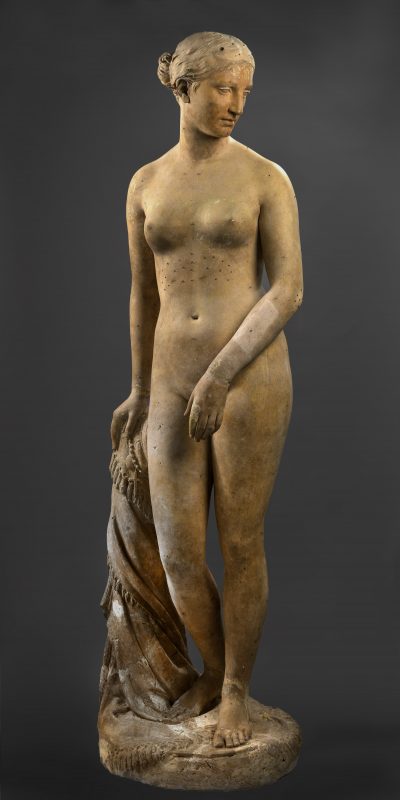 This plaster on metal base model of Hiram Power’s “Greek Slave,” is the centerpiece of the exhibit “Measured Perfection,” in the Smithsonian American Art Museum.

(A different plaster pointing model also in the SAAM collection but currently off display was used to create a sixth marble replica that is now in the collection of the Brooklyn Museum, American Art Museum Curator Kareen Lemmey explains. This model shows the slave’s hands confined by a straight bar manacle.)

The third on view, the second of the six marbles produced in Power’s lifetime, spent her adolescence in the Octagon Room and now calls the National Gallery of Art home, occupying her third museum building in as many centuries.

The sculpture has left an indelible mark on the nation’s capital, personifying in stone Corcoran’s legacy of American culture and providing a fleeting look at that legacy’s collapse and renewal.

Through her we can begin to see Corcoran’s genius, and through her travels we are afforded a unique view on the inner politics of Washington curators, from the mid-19th century to the present.

Jewel in the setting

The Greek Slave was endeared to its creator, Powers, and local patron Corcoran.

Although architect James Renwick helped out, “it was [Corcoran’s] inspiration to feature it there in that octagonal room as a kind of jewel in the setting,” explains Betsy Broun, the outgoing Margaret and Terry Stent director of the Smithsonian American Art Museum. 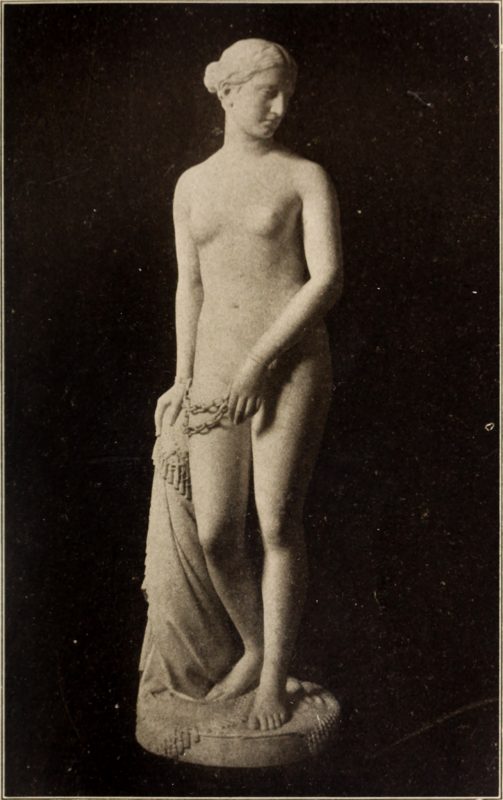 A photograph of the marble “Greek Slave” in the Corcoran Gallery of Art from an 1910 book: “The art treasures of Washington: an account of the Corcoran Gallery of Art and of the National Gallery and Museum, with descriptions and criticisms of their contents; including, also, an account of the works of art in the Capitol, and in the Library of Congress, and of the most important statuary in the city.” Click image for more information.

He gave her “the gallery that overlooked the White House, … facing the window, facing the President,” Broun says, “emblematic of the best America can do.”

But the Corcoran collection outgrew the Renwick Gallery by 1897, and was moved four blocks south down 17th Street to the Flagg Building, which it occupied until 2014. The privately-held museum closed for good that October, with its collection disbursed (and for the most part accessioned) by the National Gallery.

The Corcoran’s venerable art school and its Flagg building was entrusted to George Washington University.

The Renwick, meanwhile became a claims court before first lady Jacqueline Kennedy undertook to save the structure.

By the time of the Corcoran’s turmoil, the Renwick was preparing for another renaissance. For decades the Smithsonian American Art Museum’s home to an important collection of modern craft, the Renwick reinvented itself as headquarters for cutting-edge technique in what museums, methods and artworks could be.

Among all this new, though, would be a testament to the old, a space in the Octagon Room dedicated to Renwick’s building and Corcoran’s legacy. In that reimagined Octagon Room, Renwick staff envisioned Greek Slave reinstalled. 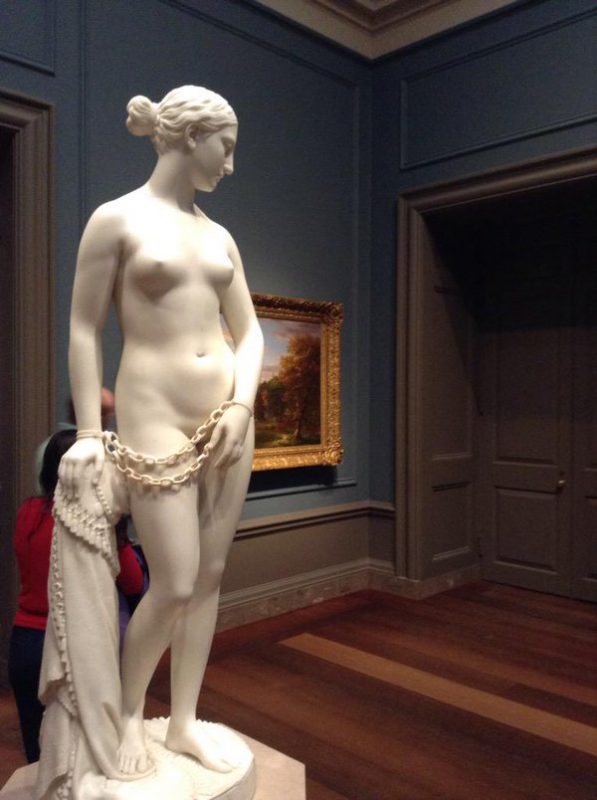 “We were interested in the question of, ‘Is it possible to bring Corcoran’s Greek Slave, the very same piece of marble that this gallery was built for, back to the gallery, to really close that circle of history and allow her to resonate in that manner,” says Nicholas Bell, former curator-in-charge of the Renwick.

Those conversations eventually spurred an informal request for the work.

“The Corcoran was slowly coming apart at the seams and the collection was clearly going to go to the National Gallery,” Broun recalls from her office some two years later. “All the museums were angling and making up their wish lists.”

Broun faxed National Gallery Director Earl “Rusty” Powell III saying, “I have just one request: May we have the Greek Slave?”

Powell was courteous, but the National Gallery had already accessioned the work, and by longstanding policy, it never deaccessions its holdings. Powell did offer a possible future loan of the work, but, Broun recalls, “That didn’t feel very satisfying.”

Bell’s immediate response was “disappointment, because we really felt that we had an opportunity to emphasize the founding history of that building.”

Seeking a silver lining, the museum took another, decidedly more modern alternative. SAAM had scanned its plaster cast as part of the “Measured Perfection” exhibit and decided to make a full-size 3-D print of Greek Slave.

Bell thinks this jelled well with the new Renwick’s ideals.

Displaying the copy gave us “the opportunity to have a conversation about art and technology and authenticity and all of that in a way we could not have,” had we displayed the original, says Bell, now senior vice president for curatorial affairs at Connecticut’s Mystic Seaport.

“It would have been poetic to have it return to its original home, but … I have slightly come to prefer the 3-D print,” Broun observes. “It feels sort-of in the spirit of Corcoran.”

Through that part of the Renwick’s renovation, Broun thinks her museum has taken the mantle of Corcoran’s legacy.

“I have every confidence that the [National] Gallery will do splendid things with the collection and I trust George Washington University to handle the building well,” Broun says. “But the one missing piece is Corcoran’s legacy.”

“It feels like we’re kind of home base for his vision over at the Renwick,” she says. “I like claiming it here.”