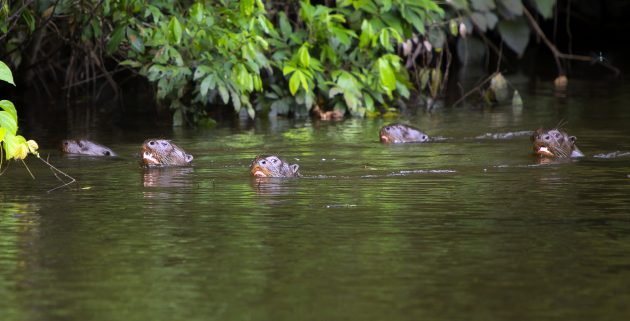 A family of giant river otters in the Tambopata River, Peru. (Flickr photo by Joseph King)

With a non-stop babble of hums, grunts and shrill squeals as they argue over fish and defend their territories, the Amazon’s giant otters are one of nature’s noisiest animals.

It turns out all that racket can be used to identify one group of otters from another—a useful detail that scientists may soon be able to harness to help protect this endangered mammal.

Driven to the brink of extinction by pelt trappers and pollution from gold mining, the otters are under scrutiny by conservation scientists who are working to learn as much about them as possible to boost their survival. But the work is tricky: Giant otters are known to abandon dens and even their own cubs when stressed.

Now, animal behavior researcher Christina Mumm of the Free University of Berlin has discovered that each otter family has its own unique audio signature. Mumm’s finding may prove useful in monitoring otter groups without spooking them. Their communal cacophony reverberates long distances.

In this video filmed in Tambopata National Reserve, giant otter juveniles close to shore can be heard begging as the rest of the family is in the center of the lake. The family approaches the juveniles and the adults provide them with fish and emit contact calls. (Video by Christina Mumm)

Otters are capable of making between 19 and 22 distinct noises, for everything from begging food from a parent to peals of alarm. When all members of a group chatter together, Mumm says, that group is identifiable by its combination of calls.

“This encoded information allows us to distinguish between different giant otter groups,” she adds.

Smithsonian Tropical Research Institute scientist Mirjam Knörnschild, Mumm’s advisor and a collaborator on the study, says an original motive for the research was to try to build a catalog of individual otter voices that could be used in annual identification. Researchers currently track individuals by matching sightings with photos of their white-furred throat patches, similar to how scientists identify whales through unique dorsal fin markings.

But because the otters are almost always active as a group, Mumm found it next to impossible to tease apart each animal’s separate voice.

“You just don’t know which one you’re hearing,” Knörnschild says. “And often the recording quality isn’t good because they’re half-submerged in water, or mumbling with a fish between their teeth. They’re very vocal, but not always clear.”

To capture the recordings needed for her study, Mumm worked with wild otters in Peru’s Manu National Park and Tambopata National Reserve. Splitting 12-hour daily shifts with research assistant Maria Cristina Urrutia, Mumm followed five wild otter groups that were floating alongside ecotourism boats bringing visitors to observe the animals in their natural habitat. Mumm chose to work with otters that were already habituated to humans, in part because she knew the animals wouldn’t be frazzled by researchers in kayaks. 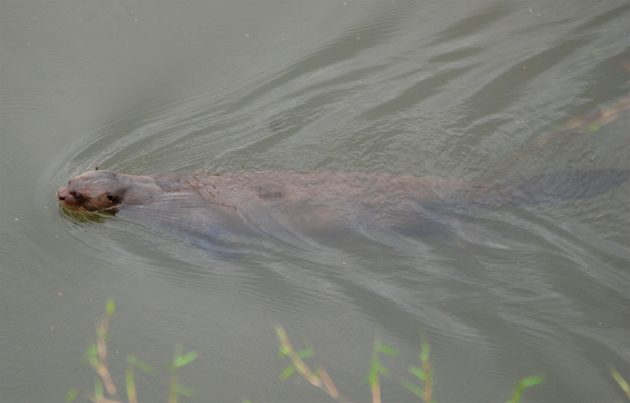 Mumm ended up with 230 excerpts from group choruses after nine months in the field. By analyzing the audio signature of an entire family when it was calling all at once (known as chorusing), she found that each of the eight groups she recorded had a unique audio signature.

With more data, Mumm may eventually be able to determine how many otters are in a single group based on its audio signature—which would greatly assist with taking annual population censuses of the animals.

Mumm’s work doesn’t answer the question of why otters have highly social vocal behavior to begin with. Some scientists think it could have evolved as a strategy to keep bloody, territorial fights to a minimum. Like a “keep out” sign on a fenced-off yard, Knörnschild says, alarm chorusing may have evolved as a strategy to avoid conflicts between groups. 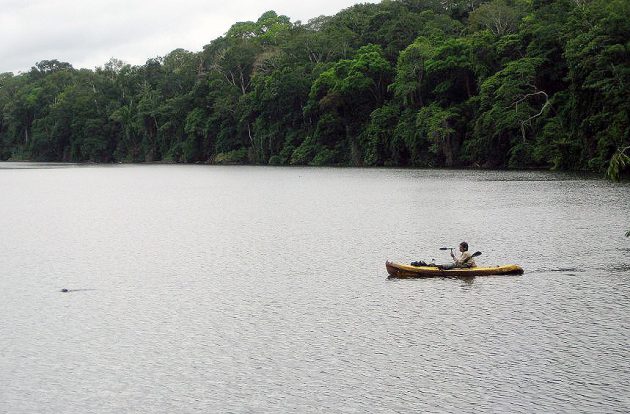 Wild otters also employ chorusing to sound the alarm against predators or to help a separated individual rejoin the group.

Captive otters in zoos, by contrast, chorus together when they see their keeper, the deliverer of daily rations. They use a type of call that is normal for wild otters, but in a different way: begging for food.

“Giant otter chorusing in a zoo isn’t an indicator of stress, but more to say, ‘Here I am, give me food!’” Knörnschild says. “They’re 2 meters long and very smart, with an attention span of less than 10 seconds, except when it comes to begging. When they see that familiar face, they are all over the place.” 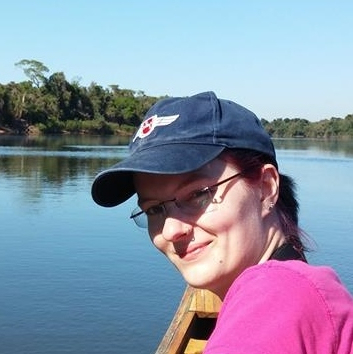 Christine Mumm in search of giant river otters to record.

In terms of conservation, Mumm’s work mainly helps scientists and tour guides understand what the otters are communicating—to other otters, and to the humans floating by trying to get a peek.

“This certainly helps us get a better idea of their group dynamics at any given moment,” Knörnschild says. “They’re gorgeous, amazing creatures, and it’s such a privilege to watch them in the wild. People want to save what they find beautiful, what they understand, and with this research into giant otters, it can be both.”

Nicole Duplaix, a University of Oregon researcher who has studied giant otters in the Pantanal region of Brazil since the 1970s, said Mumm’s work adds a new dimension to understanding otters’ behavioral patterns.

“Even if the group was out of sight I could tell from their sounds whether they were fishing, swimming or interacting, which is very useful,” Duplaix says.

By knowing the otters’ audio signatures, scientists can mimic their choruses to put them at ease.

“Also when I saw a group for the first time and imitated their friendly calls the otters would accept me and not flee in alarm, most of the time,” Duplaix says. “Knowing the animal’s behavior and calls is a crucial step in the preparation of field research.”