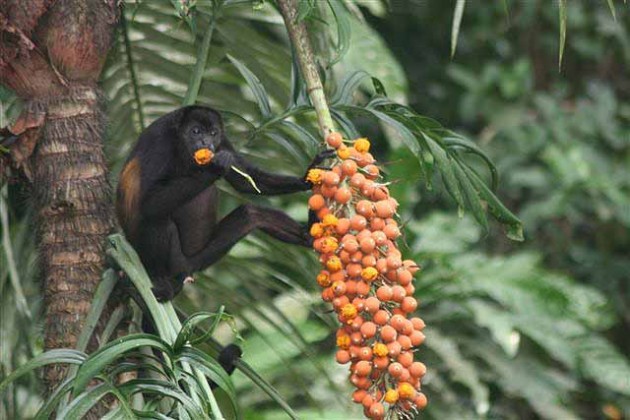 The fifth Howler Monkey census of the Smithsonian’s Barro Colorado Island research station in Panama, organized by Katie Milton, professor in the department of Environmental Science, Policy and Management at the University of California, Berkeley, has revealed that monkey numbers have not changed significantly for 33 years.

Long before dawn on March 19 and 20, Katie Milton and a group of stalwart volunteers, each armed with flashlight and compass, spread out into the jungle to take up positions at 35 listening stations marked on their maps of the island.

Just before sunrise, howler monkeys launch into a chorus of howls, roars and barks.  From 5:15 a.s. until 6:30 a.m., each volunteer recorded the time and direction of these vocalizations and estimated the distance to each group that they could hear from their stations.  As they walked back to the lab in the early morning light they noted locations of all monkey groups they saw. 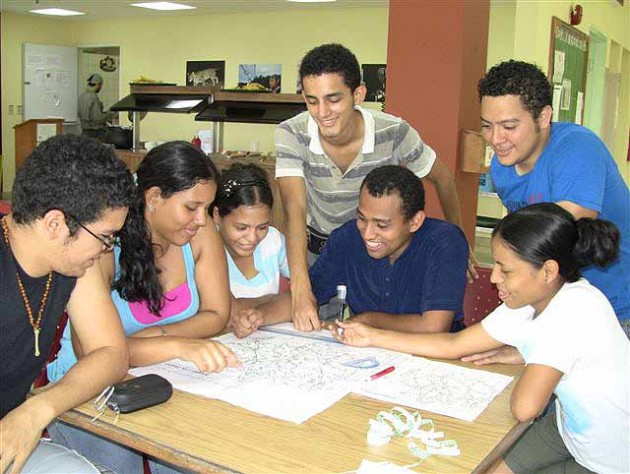 Students from the University of Panama attend a pre-census workshop.

“It amazes me that volunteers want to get up at 4 a.m. to walk through the dark forest alone for an hour or more. But it is a thrill when they hear that first howl and know the dawn chorus is beginning,” Milton says.

Lines drawn on a map from each station toward the compass angle of the observed sounds intersect, marking the estimated location of each group.  Based on this technique called triangulation Milton estimated that there are 60-70 groups on the island.  By multiplying the number of groups by the average number of individuals in a group—between 17 and 18 monkeys— she concluded that there are roughly 1200 individuals in fairly evenly spaced groups. 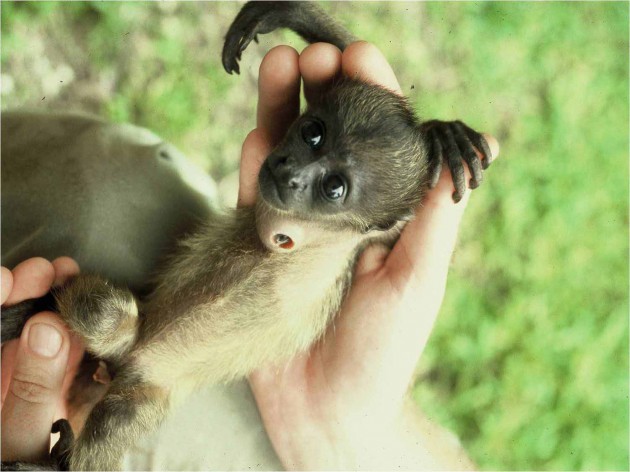 A baby howler monkey with a bot fly lesion on its neck. An ongoing study of the cause of death of howler monkeys on Barro Colorado has identified the howler monkey bot fly, Cuterebra baeri, as the single most important factor.

Census volunteers always include internationally known ecologists: Smithsonian staff scientists and visiting scientists, as well as current students and fellows.  Barro Colorado’s game wardens and two Panamanian national forest police manned some of the most inaccessible listening stations. Eight highly-motivated students from the University of Panama arrived on the Island on March 18th to participate in a 2-day workshop on determining primate densities that included volunteering for the count.

“It doesn’t look like howlers on Barro Colorado have suffered from any devastating diseases or other catastrophic problems for the last three decades,” Milton says. “Groups are larger at some times of year and smaller at others, which seems to reflect births and the specific causes of death that affect different ages of monkeys at different times of the year.”–Beth King

To listen to audio Files of howler monkeys and interview with Katie Milton, visit this Web site:
https://biogeodb.stri.si.edu/bioinformatics/dfm/metas/search/stxt:howler/type:Audio