On the Smithsonian Tropical Research Institute’s Barro Colorado Island in the Panama Canal, staff members are taking down a network of seven tall Automated Radio Telemetry System towers used to track animals wearing radio-transmitters. Scientists on the island are switching to GPS and camera trap systems to produce more data with less infrastructure. 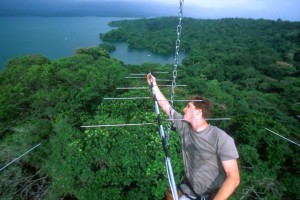 Experiences with ARTS over the last eight years on BCI have led to the development of new technologies, including the miniaturization of GPS tracking devices, revolutionary camera trap monitoring techniques, a Smithsonian repository of camera trap images, and a global archive of animal tracking data www.Movebank.org

Images above and below: Seven tall Automated Radio Telemetry System towers once towered over the forest canopy on Barro Colorado Island. They are being taken down in favor of GPS and camera trap surveys. (Images courtesy STRI)

In 2003, researchers Roland Kays (New York State Museum) and Martin Wikelski (Princeton University, now at the Max Plank Institute) founded the experimental ARTS to track the activity and movement of animals wearing small radio-transmitters. According to Kays, “at that time tracking options were limited because GPS devices were so large they were carried by surveyors in backpacks and camera traps were limited to rolls of 36-exposure film.” 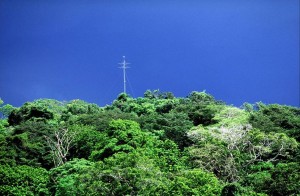 GPS devices have been improved and miniaturized over the past three years, spurred on in part by former ARTS engineer Franz Kuemmeth (founder of E-obs GPS tracking company) and ARTS biologists, who rapidly adopted the new technology to track animals on BCI…and off. New sensors are also being developed to work in concert with GPS tags to provide detailed information about animal behavior and physiology.

ARTS researchers also developed new methods for monitoring animal movement with camera traps. This approach was initially developed to monitor animals moving palm seeds that were being tracked by the ARTS, but is now being implemented at SIGEO sites around the globe. The BCI camera trap data are also being shared with the public through a new ‘SI Wild’ website that combines the images from ten Smithsonian camera trap studies around the world and will launch in 2011.–Meg Crofoot and Roland Kays, ARTS