Rabbit-sized with squirrel-like habits, the agouti of Central America is a hoarder and a robber. When not collecting fallen nuts and burying them in shallow holes, the agouti is adept at finding, stealing and re-hiding nuts buried by its neighbors. A single nut, in fact, might be hidden and stolen multiple times. The agouti’s method of seed dispersal and caching “is critically important for tropical trees, it gives seeds a much better chance for germination,” says Roland Kays, a mammalogist at the Smithsonian Tropical Research Institute in Panama, and curator at the New York State Museum in Albany. 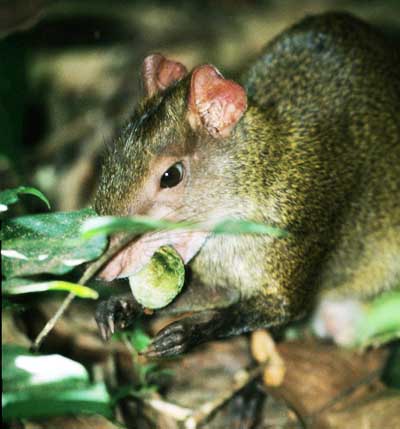 Photo: An agouti on Barro Colorado Island with a palm nut.

Hoarding seeds is also important for the agouti, Kays says. “People may not realize it but in certain seasons food is scarce in the tropical jungle. Just as squirrels in North America hide acorns to survive snowy winters, agoutis hide nuts in the tropics to survive periods when little food is available.”

In a series of ongoing experiments on Barro Colorado Island in the Panama Canal, Kays and other researchers are using camera traps, radio collars and palm nuts with tracking transmitters attached to them to take a closer look at the nut-hoarding strategies of the agouti. “On the jungle floor there can be quite a lot of seed-cache thievery,” Kays explains. “We wanted to learn how the agouti’s methods of hiding seeds take into account such things as pilfering, scarcity of seeds and seed size.”

The researchers found that where less food is available, agoutis spread their seed cashes more widely, making it harder for pilferers to find the nuts they hide. “To hide nuts further away from the tree where they are found requires more energy, yet an animal benefits when fewer of their caches are found by pilferers,” Kays says. “In lean areas competitors increase their foraging and the hoarders are left with no other choice but to spend more time in hiding seeds or lose them to thieves.”

Sequence also plays a role in seed dispersal the researcher found. In taking seeds from a tray laid on the ground by researchers, the agoutis hid the first seeds they removed closer to the tray than the seeds they took later on.
And finally the researchers learned larger seeds are hidden with more care than smaller seeds. “In terms of energy value, a larger seed is more valuable and worth the extra effort to hide it,” Kays explains.

“It is interesting that a rodent can be doing this,” Kays points out. “It is ingrained in the calculations of the daily life of an agouti to make these optimal decisions.”

The research paper “Scatter Hoarding of the Central American agouti: a test of optimal cache spacing theory,” can be found at the Web address: http://snurl.com/tek7x