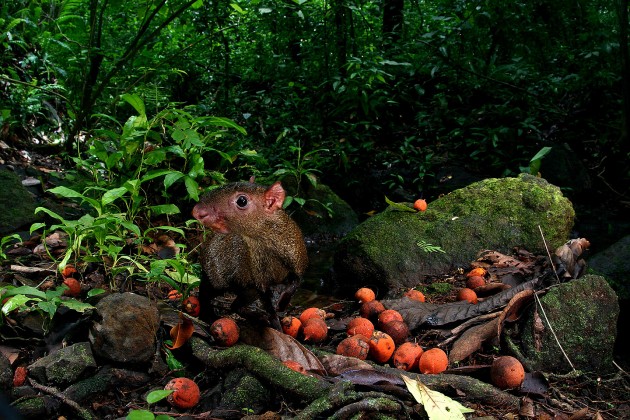 Big seeds produced by many tropical trees were probably once ingested and then defecated whole by huge mammals called gomphotheres that dispersed the seeds over large distances. But gomphotheres were mostly hunted to extinction more than 10,000 years ago. So why aren’t large-seeded plants also extinct? A new Smithsonian report to be published in the early online edition of Proceedings of the National Academy of Sciences on July 16 suggests that rodents may have taken over the seed-dispersal role of gomphotheres.

By attaching tiny radio transmitters to more than 400 seeds, Patrick Jansen, scientist at the Smithsonian Tropical Research Institute and Wageningen University, and his colleagues found that 85 percent of the seeds were buried in caches by agoutis, common, house cat-sized rodents of tropical lowlands. Agoutis carry seeds around in their mouths and bury them for times when food is scarce.

Video: This video shows the relative movement paths of 224 radio-tagged palm seeds handled by rodents on Barro Colorado Island, Panama. Colored dots mark locations of 129 seeds that were found eaten (orange), 86 seeds last seen before they lost their tags (gray), and 9 seeds that were still alive, cached, and being monitored after a year (pink). Smithsonian Tropical Research Institute, Panama. 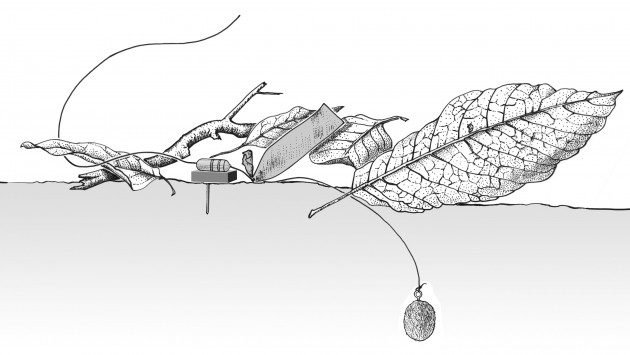 Radio tracking revealed a surprising finding: when the rodents dig up the seeds, they usually do not eat them, but instead move them to a new site and bury them, often many times. One seed in the study was moved 36 times, traveling a total distance of 749 meters and ending up 280 meters from its starting point. It was ultimately retrieved and eaten by an agouti 209 days after initial dispersal.

Researchers used remote cameras to catch the animals digging up cached seeds. They discovered that frequent seed movement was primarily caused by animals stealing seeds from one another. Ultimately, 35 percent of the seeds ended up more than 100 meters from their origin. “Agoutis moved seeds at a scale that none of us had ever imagined,” said Jansen.

“Previously, researchers had observed seeds being moved and buried up to five times, but in this system it seems that this re-caching behavior was on steroids,” said Ben Hirsch, who ran the fieldwork as a post-doctoral fellow at the Smithsonian Tropical Research Institute in Panama. “By radio-tagging the seeds, we were able to track them as they were moved by agoutis, to find out if they were taken up into trees by squirrels, and to discover seeds inside spiny rat burrows. This resolution allowed us to gain a much better understanding of how each rodent species affects seed dispersal and survival.”

By taking over the role of large Pleistocene mammals in dispersing these large seeds, thieving, scatter-hoarding agoutis may have saved these tree species from extinction.