Hungry rodents that wake up early are much more likely to be eaten than rodents getting plenty of food and shut-eye, according to new results from a study at the Smithsonian Tropical Research Institute in Panama. The study was published in the journal Animal Behavior, early online edition, Dec., 2013.

Scientists equipped agoutis, common rain forest rodents, and ocelots, their feline predators, with radio collars and tracked them 24/7 via an automated telemetry system on Barro Colorado Island. Agoutis were most active in the daytime. Ocelots were most active at night. 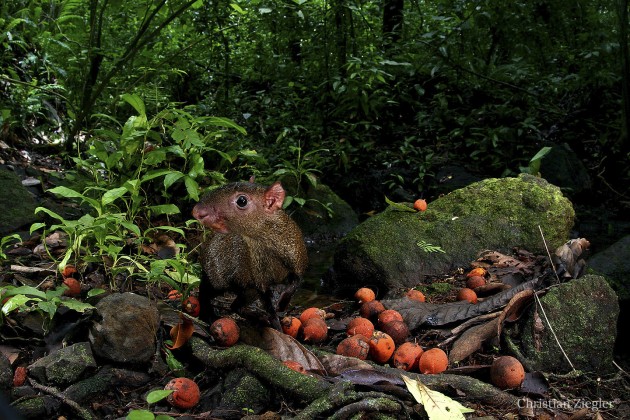 An agouti on Barro Colorado Island. (Photos by Christian Ziegler)

To determine when it was dangerous for agoutis to be active, scientists first recorded daily activity patterns of agoutis as well as ocelots. Camera traps placed across the island photographed all animals that passed in front of the lens and recorded the time. 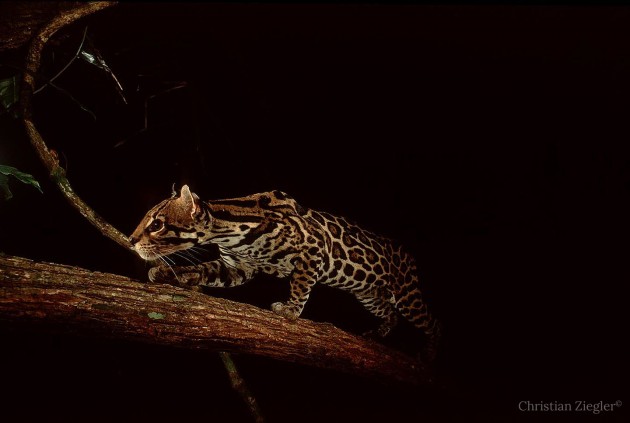 During the day, thousands of agoutis were active, but few ocelots prowled the island. Around sunset, as agoutis sought the shelter of their burrows, the ratio of ocelots to agoutis jumped, and then droped again around sunrise.

Radio signals produced by an animal’s transmitter collar were simultaneously picked up by radio towers around the island. Researchers could “watch” the animals’ activity online.

When an animal stopped moving, scientists saw a flat line, much like the electrocardiogram of a heart-attack victim, on their screens. When agoutis died, researchers quickly arrived on the scene to determine the cause of death. Placing a video camera at the scene allowed them to know if a predator returned to eat the remains.

An ocelot devours an agouti

Seventeen of 19 dead agoutis found in the study were killed by ocelots. Most kills happened just before sunrise and just after sunset, when relatively few agoutis are active.

Scientists compared daily activity patterns of agoutis between parts of forest with contrasting abundance of palm seeds. First, they determined at what times agoutis entered and exited their burrows based on changes in radio signals. Second, they placed camera traps at the entrances and recorded the time an agouti entered and exited.

Both methods showed that agoutis in areas with less food left their burrows earlier and entered their burrows later than agoutis in food-rich areas. Hungry agoutis were much more active at twilight and were more likely to get killed by an ocelot.

“We knew that hungry animals tend to take more risks” said Jansen. “But this is the first study to so thoroughly document the behavior of both predator and prey.”

Next, Jansen will examine what the differences in predation risk mean for seed dispersal by agoutis, which bury seeds as food reserves in numerous scattered caches. “Once an ocelot kills an agouti, the agouti can no longer eat its food reserves,” Jansen said. “These seeds may germinate and establish a new tree. Hungry agoutis plant trees but may never see the fruit of their labor—a fascinating feedback loop.”

This study was supported by U.S. National Science Foundation and the Netherlands Organization for Scientific Research. The Automated Telemetry System was funded by the Frank Levinson Family Foundation.