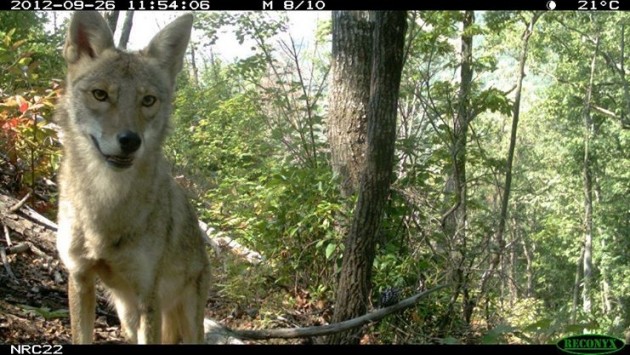 A coyote investigates a camera trap set up in a wooded area. A two-year study looking at occurrences of cats and coyotes in protected areas, urban forests and suburban habitats showed that where coyotes are common, cats are not.

In one of the largest studies of its kind, a volunteer-fueled camera trapping effort showed that where coyotes have moved in, cats are nowhere to be found.

Smithsonian research associate and North Carolina State University zoologist Roland Kays wanted to know more about the extent of domestic cat hunting in residential areas, urban forests and protected natural areas. So from 2012 to 2014, Kays and several other Smithsonian researchers, including conservation biologist Tavis Forrester, coordinated hundreds of volunteers to set up motion-triggered camera stations to look at where cats were actually hunting.

What they found, almost without exception, is that where coyotes are, cats aren’t.

“Given the fact that we know domestic cats kill a lot of native wildlife, if cats are getting in our natural areas, it’s a big conservation concern,” says Kays. “That’s not what we found. There were basically no cats in 30 of the 32 protected areas we surveyed, and the one consistent variable was the presence of coyotes. The pattern was obvious and striking.” 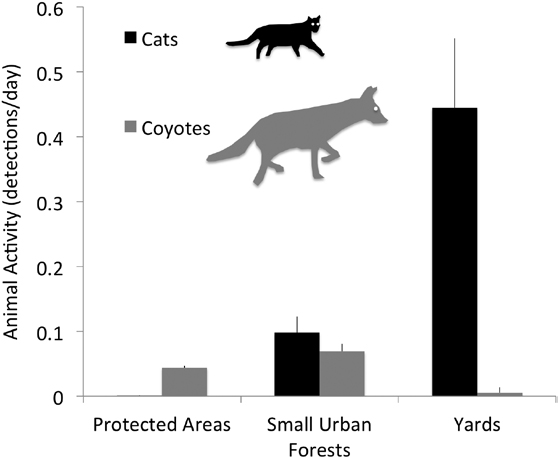 The average detection rate of cats compared with coyotes during a two-year study looking at how common the two predators are in various habitats showed that cats are 300 times more common in backyards—where coyotes are rarely found—versus in protected wooded habitats, where virtually no cats are found.

“Basically no cats” means that over the course of the study, 16 parks had zero cats, and in 14 of the protected areas, a single cat was detected. Cameras were set up in state and national parks in Maryland, Virginia, West Virginia, North Carolina, South Carolina and Tennessee, and in 177 sites in small forested patches and suburban areas around Raleigh, N.C.

One concern researchers wanted to address was whether protected areas directly adjacent to inhabited areas could be so-called “ecological traps”—areas that are abundant in resources and attractive to native species, but have some hidden aspect that’s a detriment, such as proximity to a high domestic cat population.

“If the reserve is large enough and connected enough to wilder areas where coyotes can live, that basically protects that area from the massive problem of cat predation,” says Forrester. However, the study didn’t directly prove that urban forests near protected areas do indeed have more coyotes. 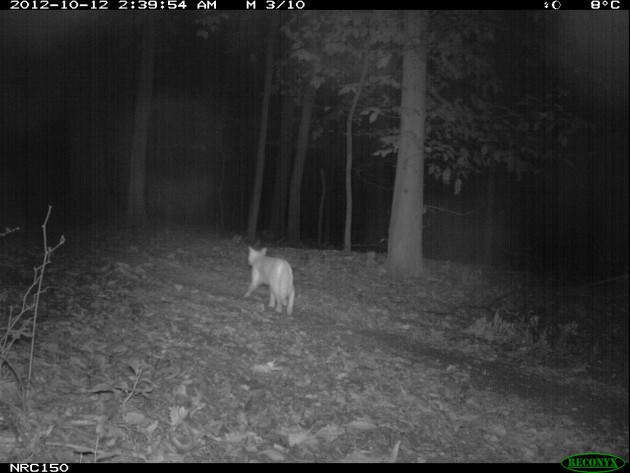 During the two three-month period when camera traps were set up in Rock Creek Park in Washington, D.C., a single cat was detected. Coyotes are relatively common in the park, despite its location in the middle of a city.

These areas don’t need to be hundreds of miles from civilization, either. Rock Creek Park, in the heart of Washington D.C., supports a healthy coyote population, and they seem to be doing a good job of deterring cats there. Cameras in the park picked up only one individual cat during two three-month survey periods; during the same length of time, cameras captured 126 images of coyotes.

But on the other hand, no matter how large and wild the area, no coyotes means a welcome mat for cats. Gambrill State Park in Maryland, is heavily wooded and undeveloped but lacks coyotes. The park had some of the highest incidences of cats in the survey, with five cats detected.

That makes Gambrill more like most backyards, places also devoid of coyotes and, not surprisingly, where cats were found to be much more common. These areas had 300 times more cat activity than protected areas. 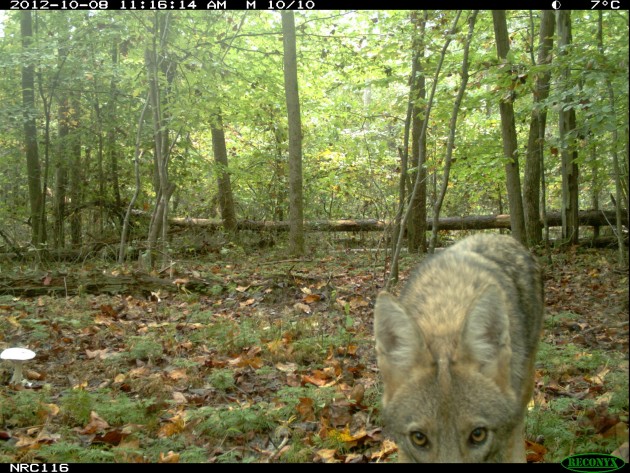 A coyote investigates a camera trap set up in a wooded area. A two-year study looking at occurrences of cats and coyotes in protected areas, urban forests and suburban habitats showed that where coyotes are common, cats are not.

But in the middle ground, urban forests, the smaller wooded areas in suburbs and near cities, coyotes and cats seem to overlap. Researchers are still looking into why this is, but speculate it may be due to lower coyote populations, fragmented habitats that allow cats to hide better, and cats hunting during daylight hours to avoid the nocturnal canines.

The scale of the study couldn’t have been accomplished without the help of hundreds of volunteers. Researchers trained and coordinated 486 volunteers to deploy the cameras in 2,000 preselected locations. Those citizen scientists also collected the camera data and made the initial identifications of the individual animals that walked across the camera’s path. Their IDs were vetted by Kays and Forrester, making this one of the largest, most rigorous studies of its kind. 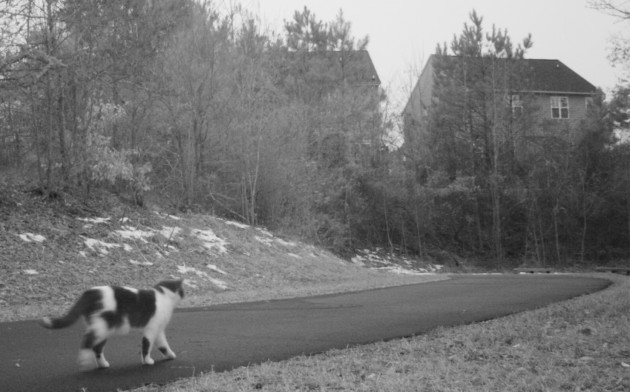 A domestic cat is captured on a camera trap during a two-year study that surveyed the abundance of cats and coyotes in various habitat types in six states.

“It takes a fair amount of work to put out all these cameras,” Forrester said. “Using citizen scientists, we were able to get a much larger spread of cameras, and it allowed us to ask this question of coyotes and cats, and whether it holds true across different habitat types. This is an actual ecological thing that’s happening, and not just a characteristic of one town or study site.”

The volunteers submitted their collected images—two million individual frames—through the Smithsonian’s built-from-scratch eMammal software, which allows the data to be archived at the Smithsonian. One benefit of this central collection and storage, Forrester says, is that the data is available for other researchers to analyze and use.

“Whether we plan to keep them out or draw them in, coyotes are coming,” Forrester says. “All predators aren’t the same in terms of interacting with people, but understanding more about predator interactions in urban areas will be important for conservation going forward. There are conservation benefits to them being here.”

The study, also co-authored by Smithsonian ecologist William McShea and Smithsonian researchers Megan Baker and Robert Costello, appeared in June 30 edition of the Journal of Mammalogy.