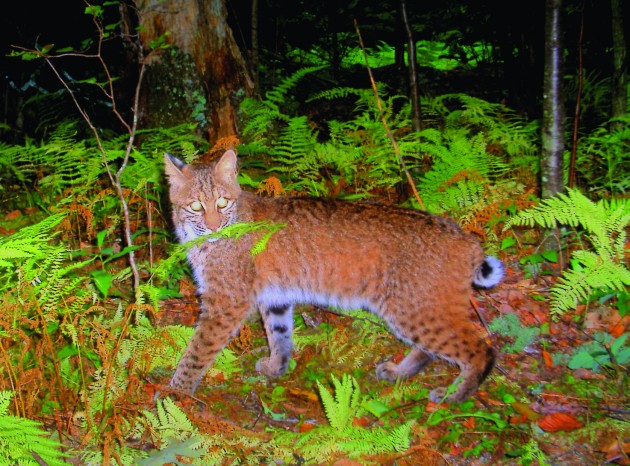 Describing his project of counting bears, bobcats and other predatory mammals along the Appalachian Trail, National Zoological Park wildlife ecologist William McShea looks to American literature for a comparison. “This is a big Tom Sawyer-type thing, where I want all this work done, and I want to get volunteers to do it for me,” he says with a chuckle. “So far, it’s working.”

Like Mark Twain’s fictional Tom Sawyer —who, when faced with the burden of whitewashing 30 yards of board fence, persuaded other boys to paint it for him—McShea has rounded up 100 eager volunteers (“who are totally jazzed,” according to the scientist) to collect data for him in the woods along the famous footpath that runs from Georgia to Maine.

For now, McShea’s project covers just a portion of the trail, a 570-mile stretch from the southern border of Virginia to the northern boundary of Maryland. His volunteers, most of them recruited from hiking clubs that maintain the trail, are responsible for setting up some 50 cameras at predetermined points along the route, leaving them in place for a month, and then moving each camera to a new spot.

Infrared sensors allow the cameras to take a photograph whenever an animal strays within range of the lens. The project’s first phase ran from April through November, during which time McShea’s volunteers set up cameras to take animal snapshots at about 350 locations along the Appalachian Trail.

With luck, the photo-shoot project should do more than tally wild carnivores across a ribbon of eastern woodland; it also should tell McShea something about the condition of the landscape those animals roam.

“The Appalachian Trail really doesn’t change that much from Georgia to Maine,” explains McShea, who works at the National Zoo’s Conservation and Research Center, in Front Royal, Va. “It’s mature oak forest up on the top of a ridge, and it just keeps going and going. But what changes is the surrounding landscape. The trail goes through suburbia, through national forest; it passes major highway systems.”

Because predators, especially larger ones, need to cover lots of territory to get an adequate diet, recording their presence or absence as the trail snakes across the varied habitats of the eastern United States measures the fitness of those habitats for wildlife, providing what McShea calls “an index of wildness along the trail.”

The project came about when McShea attended a 2006 conference at which officials from the National Park Service were seeking ways to use volunteers to gather environmental data about the trail. McShea suggested the predator survey, modeled after ones he has done in China and Malaysia, where he trained staff at wildlife reserves to set up and use cameras to take a census of animal populations.

By early 2007, McShea was training volunteers in this country in the fine points of automated wildlife photography. He taught them to strap cameras to trees at about knee height. “Most animals are shorter than you think they are,” he explains, and the camera’s infrared sensor needs to be low enough to be triggered, not just by bears but by foxes and raccoons.

To avoid creating a gallery of hiker portraits, cameras were set up away from the Appalachian Trail itself but along nearby animal trails. Volunteers also were given directional coordinates within a predetermined segment of the Appalachian Trail and instructed to set up their camera within 100 meters of that location.

In addition to cameras, “the stink” was provided to aid McShea’s helpers. “That’s what we call it,” says Ricki Ashcraft, an education specialist at the Conservation and Research Center, who as a volunteer is helping to manage three cameras along a stretch of the Appalachian Trail in Shenandoah National Park. This scent lure, extracted from animal musk glands, is obtained from trapping-supply companies. “It smells to high heaven,” she says. But a drop left on a stick or stone in front of a camera will make a passing predator pause just long enough for the project’s digital cameras to wake up from “sleep mode” and get the picture.

McShea says his volunteers are enthusiastic about the work because “they maintain sections of the trail and they’re always wondering, ‘What’s here? Do they have bobcats on their section of trail, or bears or weasels?’ Some are even doing it because they hope they may photograph a mountain lion.”

For the record, McShea does not believe wild cougars still roam the Appalachians. But perhaps with a nod to Tom Sawyer, he says he’s promised “a bonus” to the first volunteer who records one.

What the project’s cameras have captured is an abundance of bears, bobcats and coyotes; a handful of startled hikers; both red and gray foxes; and a surprisingly small number of raccoons, opossums and skunks.
After shutting down for the winter, McShea intends to resume his experiment in what he calls “citizen science” for another seven months beginning in the spring. Then, having honed procedures for using trail-club volunteers to set up cameras, record habitat information and sprinkle stink, he hopes “to talk someone into letting me do the entire trail.”

That “megatransect” along the entire 2,175-mile Appalachian Trail would, like the current project, seek to determine how the East’s wild carnivores are coping within the variety of natural and highly developed landscapes that bracket the trail through 14 states. Like much of McShea’s research, whether studying giant pandas in China or deer in Virginia, the work has a practical bent.

“I’m trying to be helpful to land managers,” McShea says, “trying to give the guys who work in the Park Service and the Forest Service and the state game agencies information that helps them do their jobs better. And I think this distribution-of-predators study is something they can use to say whether they’re doing a good job or not.”