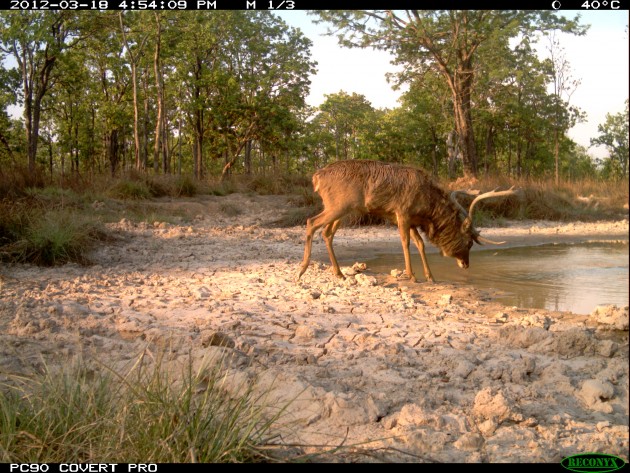 It is a simple solution to a wildlife water shortage.

During the annual dry season [November through April] in a protected forest in eastern Cambodia, wildlife scientists hired local workers with shovels to dig out accumulated sediment from six remote and dried-up waterholes. The result: During the following dry season five of the holes did not dry out and remained a valuable resource for large ungulates (Eld’s deer and banteng), large waterbirds (ibis, cranes and storks) and many other animals (wild pigs, civets, jackals).

After the waterholes were deepened in Mondulkiri Protected Forest, where the study was conducted, “they did a great job at retaining water,” observes William McShea, a wildlife biologist at the Smithsonian Conservation Biology Institute and one of the originators of the study. “We added depth to the holes, but not surface area which would have just increased evaporation.” [Three of the study holes were deepened to a maximum depth of 3.3 feet, two to 1.6 feet and one to 8 inches.] 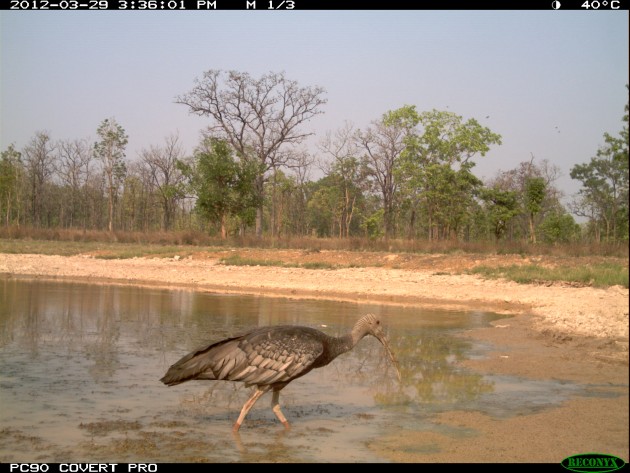 This camera-trap image shows an endangered giant ibis foraging at a modified waterhole.

Surveys prior to the project’s start revealed that only 10 percent of some 50 waterholes in a study area in the forest and only one of the six deepened holes normally held water throughout the dry season. Details of the study, conducted by scientists from the World Wildlife Fund, the Institute for Theoretical Biology in Germany, the Smithsonian and the Cambodian Department of Wildlife and Biodiversity appeared in a recent issue of the Journal of Threatened Taxa.

Camera traps installed near the deepened waterholes revealed 23 different species, including 10 globally threatened species (including the giant ibis, white shouldered ibis, red-headed vulture, Eld’s deer, banteng and dhole). More water during the dry season may improve the reproductive success of some of these species, the researcher’s write. In addition, more waterholes may reduce disease transmission by preventing too many animals from gathering in the same place. 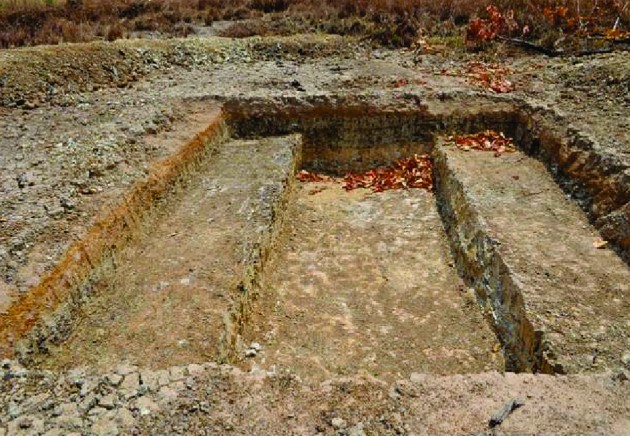 A waterhole in Cambodia after it was manually deepened with shovels.

Originally, animals living in and around Mondulkiri Protected Forest were able to move about as their waterholes dried up and their water resources changed from season to season. “Now, as they are being more and more confined to the boundaries of the park, their existing waterholes need to be flexible enough to retain water through the dry season,” McShea explains.

“During the rainy season in eastern Cambodia it rains cats and dogs, yet 90 percent of that water drains off pretty quickly. A deeper waterhole catches more water. It’s like installing a bigger water tank,” McShea says. 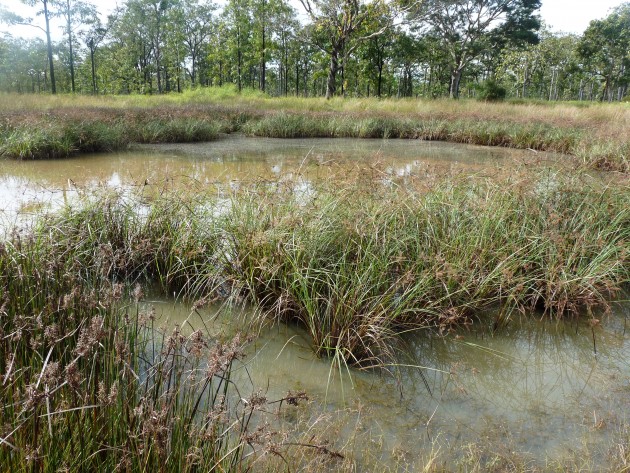 A modified waterhole in Cambodia filled with water at the end of the rainy season.

“What we think, but have no evidence for,” McShea adds, “is that this landscape originally had elephants wallowing in these water holes. This probably served to re-deepen them every year. Now, sediment builds up and they get shallower and shallower. The result is they just don’t work as well as they used to.”

Predicted changes in precipitation and temperature associated with climate change are likely to affect water retention during the dry season in the future. For now, McShea says, deepening waterholes “is a simple way to increase the carrying capacity of this forest.”