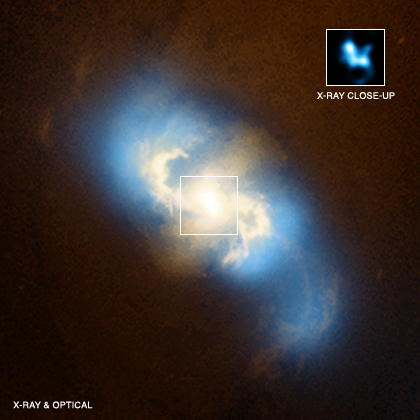 This image is a composite of X-rays from Chandra (blue) and optical data from the Hubble Space Telescope (gold) of the spiral galaxy NGC 3393. The diffuse blue emission in the large image is from hot gas near the center of NGC 3393 and shows low energy X-rays. The inset shows only high energy X-rays, including emission from iron. This type of emission is a characteristic feature of growing black holes that are heavily obscured by dust and gas. Two separate peaks of X-ray emission (roughly at 11 o’clock and 4 o’clock) can clearly be seen in the inset box. These two sources are black holes that are actively growing, generating X-ray emission as gas falls towards the black holes and becomes hotter. The obscured regions around both black holes block the copious amounts of optical and ultraviolet light produced by infalling material. (Images: NASA Chandra)

“If this galaxy weren’t so close, we’d have no chance of separating the two black holes the way we have,” said Pepi Fabbiano of the Harvard-Smithsonian Center for Astrophysics (CfA) in Cambridge, Mass., who led the study that appears in this week’s online issue of the journal Nature. “Since this galaxy was right under our noses by cosmic standards, it makes us wonder how many of these black hole pairs we’ve been missing.” 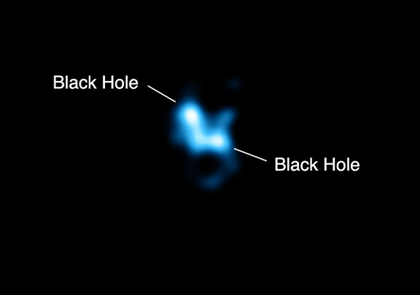 At a distance of 160 million light years, NGC 3393 contains the nearest known pair of supermassive black holes. It is also the first time a pair of black holes has been found in a spiral galaxy like our Milky Way. Separated by only 490 light years, the black holes in NGC 3393 are likely the remnant of a merger of two galaxies of unequal mass a billion or more years ago.

Previous observations in X-rays and at other wavelengths indicated that a single supermassive black hole existed in the center of NGC 3393. However, a long look by Chandra allowed the researchers to detect and separate the dual black holes. Both black holes are actively growing and emitting X-rays as gas falls towards them and becomes hotter.

When two equal-sized spiral galaxies merge, astronomers think it should result in the formation of a black hole pair and a galaxy with a disrupted appearance and intense star formation. A well-known example is the pair of supermassive black holes in NGC 6240, which is located about 330 million light years from Earth.

However, NGC 3393 is a well-organized spiral galaxy, and its central bulge is dominated by old stars. These are unusual properties for a galaxy containing a pair of black holes. Instead, NGC 3393 may be the first known instance where the merger of a large galaxy and a much smaller one, dubbed a “minor merger” by scientists, has resulted in the formation of a pair of supermassive black holes.

In fact, some theories say that minor mergers should be the most common way for black hole pairs to form, but good candidates have been difficult to find because the merged galaxy is expected to look so typical.

“The two galaxies have merged without a trace of the earlier collision, apart from the two black holes,” said co-author Junfeng Wang, also from CfA. “If there were a mismatch in size between the two galaxies it wouldn’t be a surprise for the bigger one to survive unscathed.”

“Collisions and mergers are one of the most important ways for galaxies and black holes to grow,” said co-author Guido Risaliti of CfA and the National Institute for Astrophysics in Florence, Italy. “Finding a black hole pair in a spiral galaxy is an important clue in our quest to learn how this happens.”