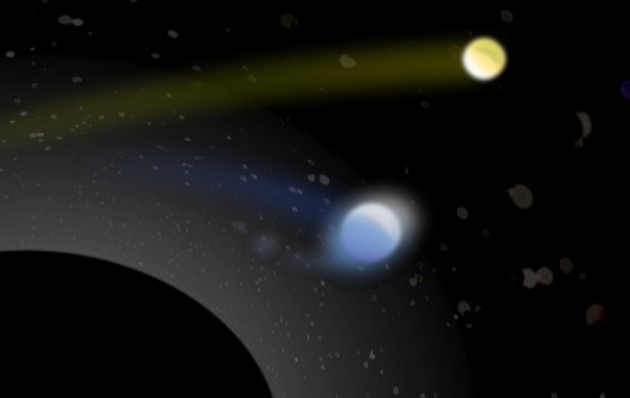 This artist’s conception of a supermassive black hole (lower left) with its tremendous gravity capturing one star (bluish, center) from a pair of binary stars, while hurling the second star (yellowish, upper right) away at a hypervelocity of more than 1 million mph. The grayish blobs are other stars captured in a cluster near the black hole. They appear distorted because the black hole’s gravity curves spacetime and thus bends the starlight. (Ben Bromley, University of Utah)

A new study by astrophysicists at the University of Utah and the Smithsonian Astrophysical Observatory in Cambridge, Mass., has found a new explanation for the growth of supermassive black holes in the center of most galaxies: they repeatedly capture and swallow single stars from pairs of stars that get too close.

Using new calculations and previous observations of our own Milky Way and other galaxies, “we found black holes grow enormously as a result of sucking in captured binary star partners,” says University of Utah physics and astronomy professor Ben Bromley, lead author of the study, published April 2 in “Astrophysical Journal Letters.”

Bromley conducted the study with astronomers Scott Kenyon, Margaret Geller and Warren Brown, all of the Harvard-Smithsonian Center for Astrophysics.

“Black holes are very efficient eating machines,” says Kenyon. “They can double their mass in less than a billion years. That may seem long by human standards, but over the history of the Galaxy it’s pretty fast.”

A binary pair of stars orbiting each other “is essentially a single object much bigger than the size of the individual stars, so it is going to interact with the black hole more efficiently,” Bromley explains. “The binary doesn’t have to get nearly as close for one of the stars to get ripped away and captured.”

To prove the theory will require more powerful telescopes to find three key signs: large numbers of small stars captured near supermassive black holes, more observations of stars being “shredded” by gravity from black holes, and large numbers of “hypervelocity stars” that are flung from galaxies at more than 1 million mph when their binary partners are captured.

Black holes are objects in space so dense that not even light can escape their gravity, although powerful jets of light and energy can be emitted from a black hole’s vicinity as gas and stars are sucked into it.

Small black holes result from the collapse of individual stars. But the centers of most galaxies, including our own Milky Way, are occupied by what are popularly known as “supermassive” black holes that contain mass ranging from 1 million to 10 billion stars the size of our sun.

Astrophysicists long have debated how supermassive black holes grew during the 14 billion years since the universe began in a great expansion of matter and energy named the Big Bang. One side believes black holes grow larger mainly by sucking in vast amounts of gas; the other side says they grow primarily by capturing and sucking in stars.

The new theory about binary stars – a pair of stars that orbit each other – arose from Bromley’s earlier research to explain hypervelocity stars, which have been observed leaving our Milky Way galaxy at speeds ranging from 1.1 million to 1.8 million mph, compared with the roughly 350,000 mph speed of most stars.

“The hypervelocity stars we see come from binary stars that stray close to the galaxy’s massive black hole,” he says. “The hole peels off one binary partner, while the other partner – the hypervelocity star – gets flung out in a gravitational slingshot.”

“We put the numbers together for observed hypervelocity stars and other evidence, and found that the rate of binary encounters [with our galaxy’s supermassive black hole] would mean most of the mass of the galaxy’s black hole came from binary stars,” Bromley says. “We estimated these interactions for supermassive black holes in other galaxies and found that they too can grow to billions of solar masses in this way.”