Astronomers using NASA’s Hubble Space Telescope have found a cluster of young, blue stars encircling the first intermediate-mass black hole ever discovered. The presence of the star cluster suggests that the black hole was once at the core of a now-disintegrated dwarf galaxy. The discovery of the black hole and the star cluster has important implications for understanding the evolution of supermassive black holes and galaxies. 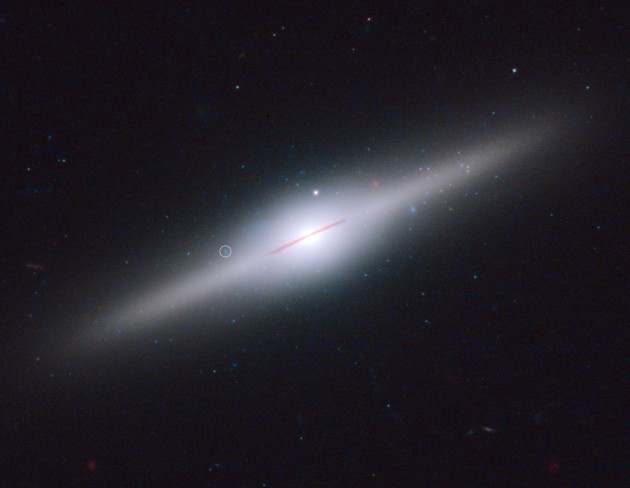 “For the first time, we have evidence on the environment, and thus the origin, of this middle-weight black hole,” said Mathieu Servillat, who worked at the Harvard-Smithsonian Center for Astrophysics when this research was conducted.

Lead author Sean Farrell, of the Sydney Institute for Astronomy in Australia, discovered this unusual black hole in 2009 using the European Space Agency’s XMM-Newton X-ray space telescope. Known as HLX-1 (Hyper-Luminous X-ray source 1), the black hole weighs in at 20,000 solar masses and lies towards the edge of the galaxy ESO 243-49, which is 290 million light-years from Earth.

Farrell and his team then observed HLX-1 simultaneously with NASA’s Swift observatory in X-ray and Hubble in near-infrared, optical, and ultraviolet wavelengths. The intensity and the color of the light shows a cluster of young stars, 250 light-years across, encircling the black hole. Hubble can’t resolve the stars individually because the suspected cluster is too far away. The brightness and color are consistent with other clusters of young stars seen in other galaxies.

Farrell’s team detected blue light from hot gas in the accretion disk swirling around the black hole. However, they also detected red light produced by much cooler gas, which would most likely come from stars.

Computer models suggested the presence of a young, massive cluster of stars encircling the black hole.

“What we can definitely say with our Hubble data is that we require both emission from an accretion disk and emission from a stellar population to explain the colors we see,” said Farrell.

Such young clusters of stars are commonly seen in nearby galaxies, but not outside the flattened starry disk, as found with HLX-1. The best explanation is that the HLX-1 black hole was the central black hole in a dwarf galaxy.

The larger host galaxy then captured the dwarf. Most of the dwarf’s stars were stripped away through the collision between the galaxies. At the same time, new young stars were formed in the encounter. The interaction that compressed the gas around the black hole also triggered star formation.

Farrell and Servillat found that the star cluster must be less than 200 million years old. This means that the bulk of the stars were formed following the dwarf’s collision with the larger galaxy. The age of the stars tells how long ago the two galaxies crashed into each other.

The future of the black hole is uncertain at this stage. It depends on its trajectory, which is currently unknown. It’s possible the black hole may spiral in to the center of the big galaxy and eventually merge with the supermassive black hole there. Alternately, the black hole could settle into a stable orbit around the galaxy. Either way, it’s likely to fade away in X-rays as it depletes its supply of gas.

“This black hole is unique in that it’s the only intermediate-mass black hole we’ve found so far. Its rarity suggests that these black holes are only visible for a short time,” said Servillat.

More observations are planned this year to track the history of the interaction between the two galaxies.

The new findings are being published in the February 15 issue of the Astrophysical Journal Letters. The journal paper is available online.