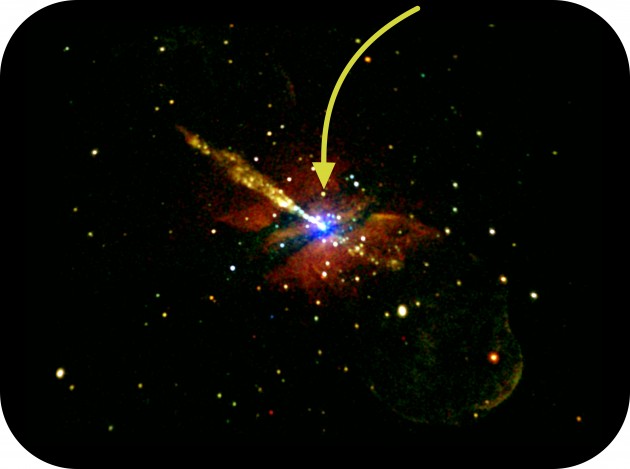 The yellow arrow in this image identifies the position of the black hole transient inside Centaurus A. The location of the object is coincident with gigantic dust lanes that obscure visible and X-ray light from large regions of Centaurus A. Other interesting X-ray features include the central active nucleus, a powerful jet and a large lobe that covers most of the lower-right of the image.  (Credit: NASA/Chandra)

An international team of scientists has discovered an ‘ordinary’ black hole in the 12 million light year-distant galaxy Centaurus A. This is the first time that a normal-size black hole has been detected away from the immediate vicinity of our own Galaxy. University of Birmingham doctoral student Mark Burke will present the discovery at the National Astronomy Meeting in Manchester, England.

Although exotic by everyday standards, black holes are everywhere. The lowest-mass black holes are formed when very massive stars reach the end of their lives, ejecting most of their material into space in a supernova explosion and leaving behind a compact core that collapses into a black hole. There are thought to be millions of these low-mass black holes distributed throughout every galaxy. Despite their ubiquity, they can be hard to detect as they do not emit light so are normally seen through their action on the objects around them, for example by dragging in material that then heats up in the process and emits X-rays. But despite this, the overwhelming majority of black holes have remained undetected.

In recent years, researchers have made some progress in finding ordinary black holes in binary systems, by looking for the X-ray emission produced when they suck in material from their companion stars. So far these objects have been relatively close by, either in our own Milky Way Galaxy or in nearby galaxies in the so-called Local Group (a cluster of galaxies relatively near the Milky Way that includes Andromeda). 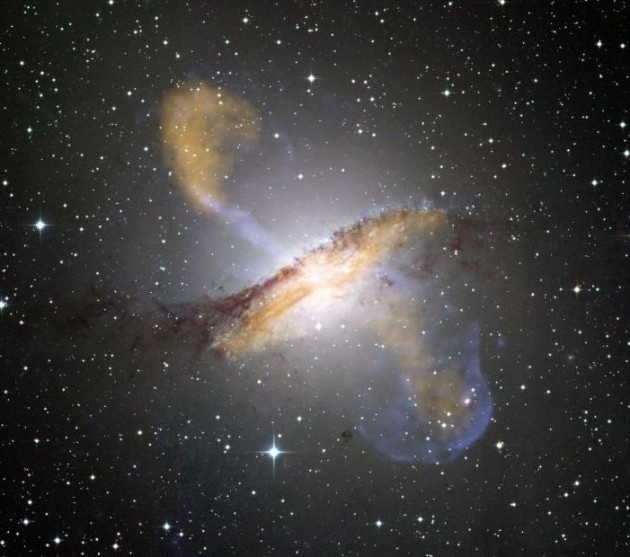 This image of Centaurus A shows a spectacular new view of a supermassive black hole’s power. Jets and lobes powered by the central black hole in this nearby galaxy are shown by submillimeter data (colored orange) from the Atacama Pathfinder Experiment telescope in Chile and X-ray data (colored blue) from the Chandra X-ray Observatory. (Credit: X-ray: NASA/CXC/CfA/R.Kraft et al.; Submillimeter: MPIfR/ESO/APEX/A.Weiss et al.; Optical: ESO/WFI)

Burke works under the supervision of Birmingham University astronomer Somak Raychaudhury and is part of an international team led by Ralph Kraft of the Harvard-Smithsonian Center for Astrophysics. The team used the orbiting Chandra X-ray observatory to make six 100,000-second long exposures of Centaurus A, detecting an object with 50,000 times the X-ray brightness of our Sun. A month later, it had dimmed by more than a factor of 10 and then later by a factor of more than 100, so became undetectable.

This behaviour is characteristic of a low mass black hole in a binary system during the final stages of an outburst and is typical of similar black holes in the Milky Way. It implies that the team made the first detection of a normal black hole so far away, for the first time opening up the opportunity to characterise the black hole population of other galaxies.

Mr Burke comments: “So far we’ve struggled to find many ordinary black holes in other galaxies, even though we know they are there. To confirm (or refute) our understanding of the evolution of stars we need to search for these objects, despite the difficulty of detecting them at large distances. If it turns out that black holes are either much rarer or much more common in other galaxies than in our own it would be a big challenge to some of the basic ideas that underpin astronomy.”

The group now plan to look at the more than 50 other bright X-ray sources that reside within Centaurus A, identifying them as black holes or other exotic objects, and gain at least an inkling of the nature of a further 50 less luminous sources.