Using data from NASA’s Chandra X-ray Observatory, astronomers have discovered an unprecedented bonanza of black holes in the Andromeda Galaxy, one of the nearest galaxies to the Milky Way.

Using more than 150 Chandra observations, spread over 13 years, researchers identified 26 black hole candidates, the largest number to date, in a galaxy outside our own. Many consider Andromeda to be a sister galaxy to the Milky Way. The two ultimately will collide, several billion years from now.

“While we are excited to find so many black holes in Andromeda, we think it’s just the tip of the iceberg,” said Robin Barnard of Harvard-Smithsonian Center for Astrophysics (CfA) in Cambridge, Mass., and lead author of a new paper describing these results. “Most black holes won’t have close companions and will be invisible to us.” 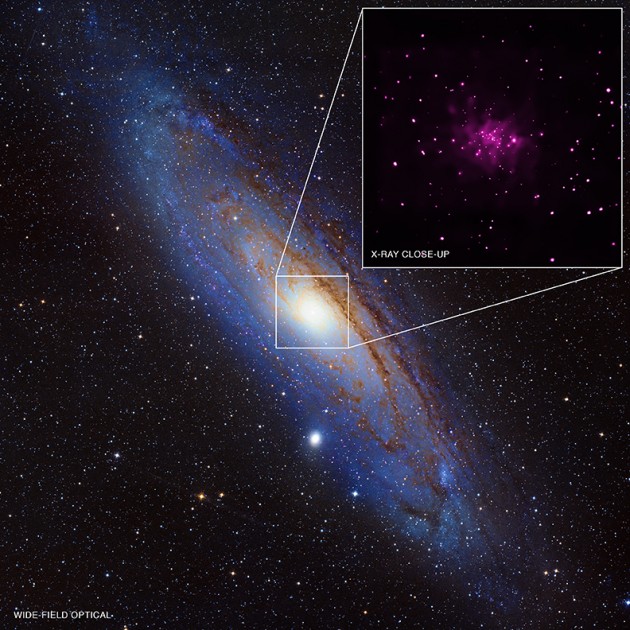 This wide-field view of Andromeda contains optical data from the Burrell Schmidt telescope of the Warner and Swansey Observatory on Kitt Peak in Arizona. Additional detail of the core and dust in the spiral arms comes from an image taken by astrophotographer Vicent Peris using data from two of his personal telescopes. In this combined optical image, red, green, and blue show different bands from the visible light portion of the electromagnetic spectrum. The inset contains X-ray data from multiple Chandra observations of the central region of Andromeda. (Credits: X-ray: NASA/CXC/SAO/R. Barnard, Z. Lee et al.; Optical: NOAO/AURA/NSF/REU Program/B. Schoening, V. Harvey and Descubre Foundation/CAHA/OAUV/DSA/V. Peris)

The black hole candidates belong to the stellar mass category, meaning they formed in the death throes of very massive stars and typically have masses five to 10 times that of our sun. Astronomers can detect these otherwise invisible objects as material is pulled from a companion star and heated up to produce radiation before it disappears into the black hole.

The first step in identifying these black holes was to make sure they were stellar mass systems in the Andromeda Galaxy itself, rather than supermassive black holes at the hearts of more distant galaxies. To do this, the researchers used a new technique that draws on information about the brightness and variability of the X-ray sources in the Chandra data. In short, the stellar mass systems change much more quickly than the supermassive black holes. 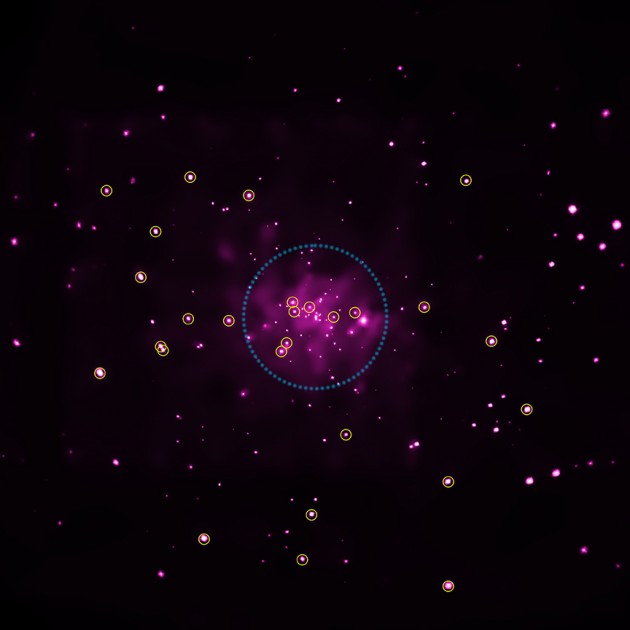 To classify those Andromeda systems as black holes, astronomers observed that these X-ray sources had special characteristics: that is, they were brighter than a certain high level of X-rays and also had a particular X-ray color. Sources containing neutron stars, the dense cores of dead stars that would be the alternate explanation for these observations, do not show both of these features simultaneously. But sources containing black holes do.

The European Space Agency’s XMM-Newton X-ray observatory added crucial support for this work by providing X-ray spectra, the distribution of X-rays with energy, for some of the black hole candidates. The spectra are important information that helps determine the nature of these objects.

“By observing in snapshots covering more than a dozen years, we are able to build up a uniquely useful view of M31,” said co-author Michael Garcia, also of CfA. “The resulting very long exposure allows us to test if individual sources are black holes or neutron stars.”

The research group previously identified nine black hole candidates within the region covered by the Chandra data, and the present results increase the total to 35. Eight of these are associated with globular clusters, the ancient concentrations of stars distributed in a spherical pattern about the center of the galaxy. This also differentiates Andromeda from the Milky Way as astronomers have yet to find a similar black hole in one of the Milky Way’s globular clusters.

“When it comes to finding black holes in the central region of a galaxy, it is indeed the case where bigger is better,” said co-author Stephen Murray of Johns Hopkins University and CfA. “In the case of Andromeda we have a bigger bulge and a bigger supermassive black hole than in the Milky Way, so we expect more smaller black holes are made there as well.”

“We are particularly excited to see so many black hole candidates this close to the center, because we expected to see them and have been searching for years,” said Barnard.

These results are available online and will be published in the June 20 issue of The Astrophysical Journal. Many of the Andromeda observations were made within Chandra’s Guaranteed Time Observer program.