Astronomers have found strong evidence that a massive black hole is being ejected from its host galaxy at a speed of several million miles per hour. New observations from NASA’s Chandra X-ray Observatory suggest that the black hole collided and merged with another black hole and received a powerful recoil kick from gravitational wave radiation. 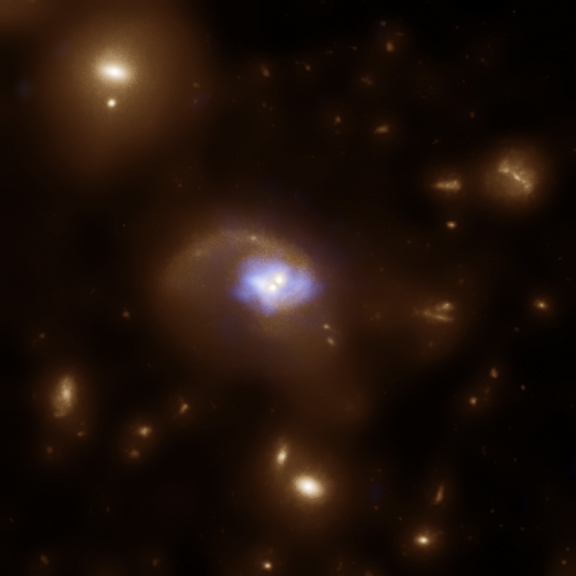 “It’s hard to believe that a supermassive black hole weighing millions of times the mass of the sun could be moved at all, let alone kicked out of a galaxy at enormous speed,” said Francesca Civano of the Harvard-Smithsonian Center for Astrophysics, who led the new study which will appear in the June 10 issue of The Astrophysical Journal. “But these new data support the idea that gravitational waves — ripples in the fabric of space first predicted by Albert Einstein but never detected directly — can exert an extremely powerful force.”

Although the ejection of a supermassive black hole from a galaxy by recoil because more gravitational waves are being emitted in one direction than another is likely to be rare, it nevertheless could mean that there are many giant black holes roaming undetected out in the vast spaces between galaxies.

“These black holes would be invisible to us,” said co-author Laura Blecha, also of CfA, “because they have consumed all of the gas surrounding them after being thrown out of their home galaxy.”

Civano and her group have been studying a system known as CID-42, located in the middle of a galaxy about 4 billion light years away. They had previously spotted two distinct, compact sources of optical light in CID-42, using NASA’s Hubble Space Telescope.

More optical data from the ground-based Magellan and Very Large Telescopes in Chile supplied a spectrum (that is, the distribution of optical light with energy) that suggested the two sources in CID-42 are moving apart at a speed of at least 3 million miles per hour.

Previous Chandra observations detected a bright X-ray source likely caused by super-heated material around one or more supermassive black holes. However, they could not distinguish whether the X-rays came from one or both of the optical sources because Chandra was not pointed directly at CID-42, giving an X-ray source that was less sharp than usual. 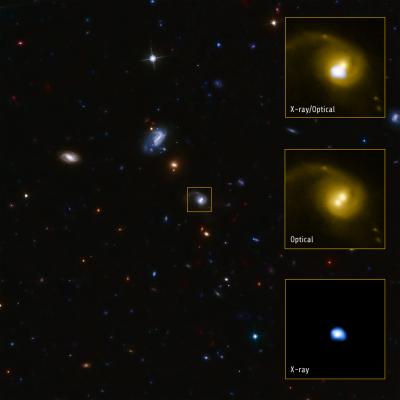 Image above: Chandra and other telescopes have shown that the galaxy CID-42 likely contains a massive black hole being ejected at several million miles per hour. The main panel is a wide-field optical image of CID-42 and the area around it. The outlined box represents the more localized view of CID-42 that is shown in the three separate boxes on the right-hand side of the graphic. An image from Chandra (top box) shows that the X-ray emission is concentrated in a single source, corresponding to one of the two sources seen in deep observations by Hubble (middle box). The precise Chandra data helps astronomers narrow their ideas about what is happening in this galaxy, supporting the ejected black hole theory. (NASA/CXC/SAO/F.Civano et al; Optical: NASA/STScI; Optical: CFHT, NASA/STScI)

“The previous data told us that there was something special going on, but we couldn’t tell if there were two black holes or just one,” said another co-author Martin Elvis, also of CfA. “We needed new X-ray data to separate the sources.”

When Chandra’s sharp High Resolution Camera was pointed directly at CID-42, the resulting data showed that X-rays were coming only from one of the sources. The team thinks that when two galaxies collided, the supermassive black holes in the center of each galaxy also collided. The two black holes then merged to form a single black hole that recoiled from gravitational waves produced by the collision, which gave the newly merged black hole a sufficiently large kick for it to eventually escape from the galaxy. The other optical source is thought to be the bright star cluster that was left behind. This picture is consistent with recent computer simulations of merging black holes, which show that merged black holes can receive powerful kicks from the emission of gravitational waves.

Both of these alternate explanations would require at least one of the supermassive black holes to be very obscured, since only one bright X-ray source is observed. Thus the Chandra data support the idea of a black hole recoiling because of gravitational waves.

The source is located in the Cosmic Evolution Survey (COSMOS) field, a large, multi-wavelength survey.