He’s a classic symbol of pride and independence: a majestic white-tail buck standing tall against a backdrop of deep forest. The image is a familiar sight on everything from pick-up truck decals to throw blankets.

These days, in Virginia at least, a more accurate depiction would show an antlered buck snacking at someone’s backyard bird feeder or crossing the paved driveway of a suburban development. Forget the deep forest, “today the highest densities of deer in the state of Virginia are in suburbia,” says William McShea, ecologist and research scientist at the Smithsonian’s Conservation Biology Institute in Front Royal, Va. 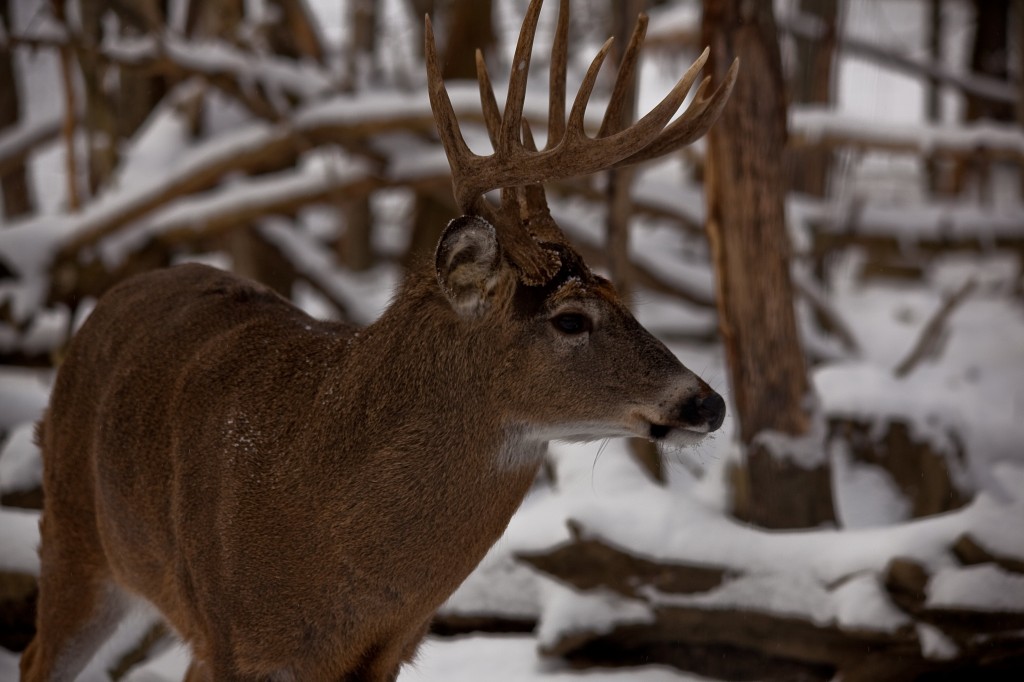 McShea is co-author of a recent study in the Wildlife Society Bulletin examining the forces at work behind parcelization—dividing up large farms and woods into small, individually owned parcels—and how it might be responsible for the dramatic rise in white-tailed deer (Odocoileus virginianus) populations in Virginia.

“For some reason deer densities shoot up in areas where large properties have been divided up into small pieces,” McShea says. “We don’t know exactly why this occurs, but we have two ideas.”

“One is that hunters are not allowed to move across a parcelized landscape to get to where the deer are. When you have a big piece of property you can pretty much chase those deer down or go to where the deer are known to hide,” McShea explains. “But when you get into these 2- to 5-acre parcels, you stop at the edge of your property or your friend’s property, and the deer just keep going onto the next parcel and the parcel after that and you can’t get access to them.” 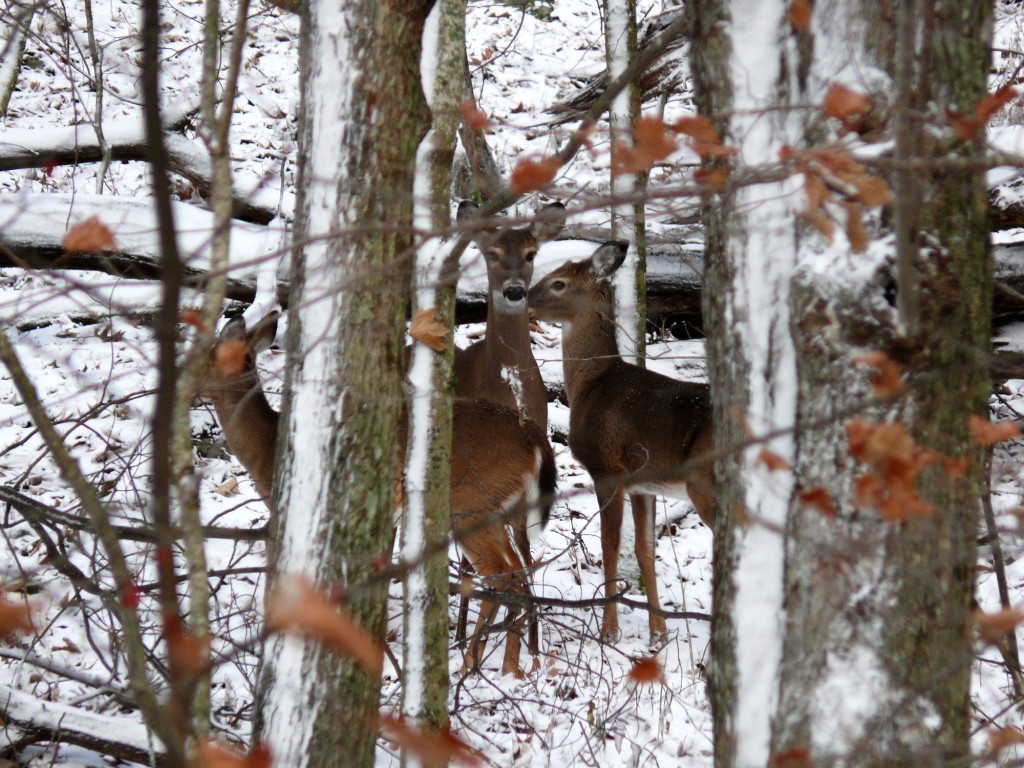 The second “is that when a property is divided into smaller units there is a much higher probability that there is an owner nearby who does not hunt their deer or allow deer to be hunted on their property. Deer have the capacity to figure out where they are not being shot at, and that is where they go.”

The increase in deer is not related to more suburban yards with new plantings of domestic shrubs and cover for deer to eat, McShea explains. “We found a lot of places where somebody had bought a big piece of property, divided it up into little parts—some of it was being built upon but most was not—and the deer density would just go crazy in there. So it isn’t the presence of houses but the land being divided-up that caused deer density to rise,” McShea says.

You do reach a critical point in development when you get down to parcels below 2 acres—1 acre to quarter-acre lots with houses—when the deer densities start to drop again, McShea says. “It becomes a matter where there are a lot of houses, the road density gets too high and the actual human footprint becomes too high.” 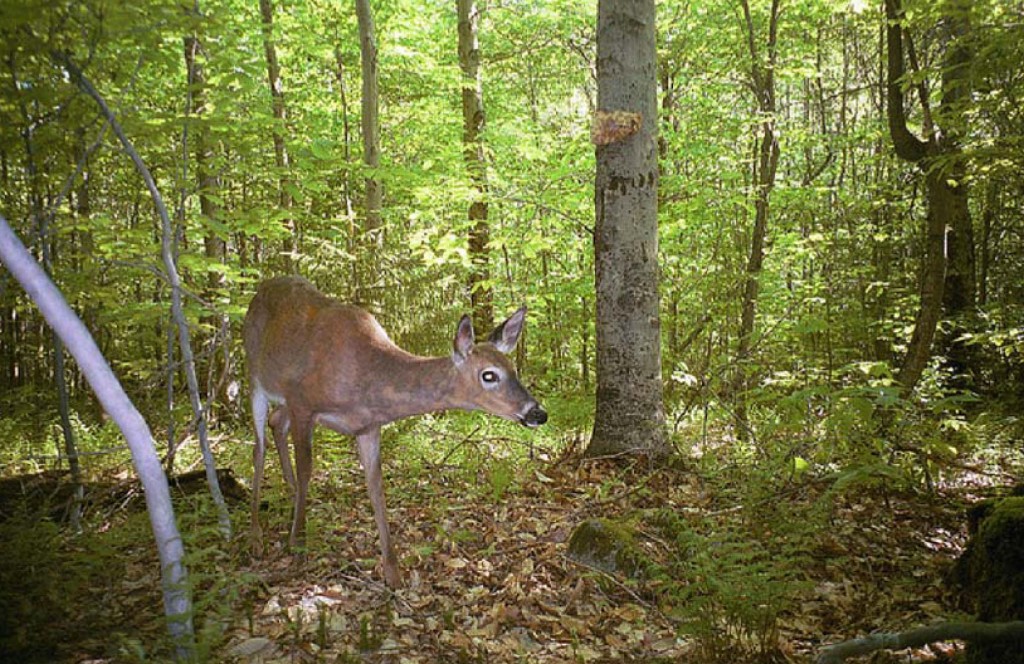 For their study McShea and his co-authors picked 11 study blocks in Frederick County and two in Rappahannock County, Virginia. Each block was roughly 13.4 miles square and had representative levels of forest cover, housing density, and road density for their counties. Maps were used to determine land use throughout each study block and landowners were identified through tax map records. Owners were then surveyed either in person, by phone or mail. Surveys included questions such as: Is hunting allowed on your property and, if so how many deer were harvested last year?

A second aspect of the study involved nighttime spotlighting and counting of deer to get a good estimate of the deer numbers in specific areas of each study block.

One reason for concern about exploding deer populations, McShea says, is the relatively recent presence of chronic wasting disease in Virginia. This fatal disease in adult deer is characterized by chronic weight loss and is passed on when deer come into direct contact with one another or in contact with the saliva of an infected animal. The disease thrives in areas with high deer densities and, because of it, Virginia wildlife managers are encouraging landowners to harvest more deer.

In addition to questions about deer harvest, the landowner survey also queried landowners about their knowledge of chronic wasting disease.

“Two or three years from now we can use our deer count estimates as a baseline to go back and learn if there are less deer in a region because the state is encouraging people to shoot more deer,” McShea says. “Or, if we may find that many people are pretty firm in their ideas of how many deer to harvest on their land, and that things are not going to change regardless.”–John Barrat