Through sheer coincidence, two Smithsonian researchers at the National Zoological Park have discovered that 18 percent of the white-tailed deer population in the Eastern United States is infected with the malaria causing parasite Plasmodium odocoilei. The discovery marks the first time a malaria parasite has been shown to infect a North American mammal population. 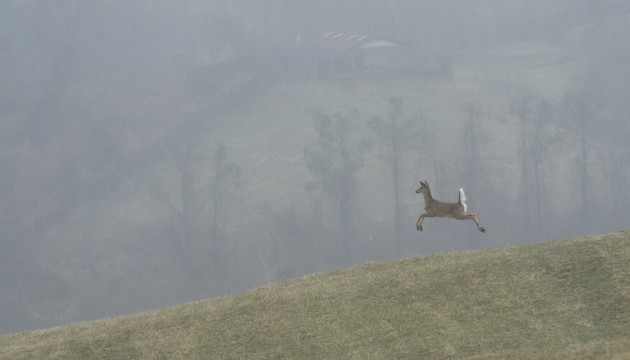 A white-tailed deer on the grounds of the Smithsonian Conservation Biology Institute in Front Royal, Va. (Photo by Lisa Ware)

In a study released today in the journal Science Advances, National Zoo researchers Ellen Martinsen and Rob Fleischer and their colleagues detail how a DNA survey of mosquitoes on Zoo grounds turned up a mysterious malaria parasite gene sequence in two of the captured mosquitoes.

Tracing the origin of the source blood back to white-tailed deer, Martinsen, Fleischer and colleagues at the Smithsonian Conservation Biology Institute, the American Museum of Natural History, and other wildlife and ecology experts, took a closer look at a repository of blood and tissue samples taken from wild white-tailed deer, elk and other ungulate species from across the United States. 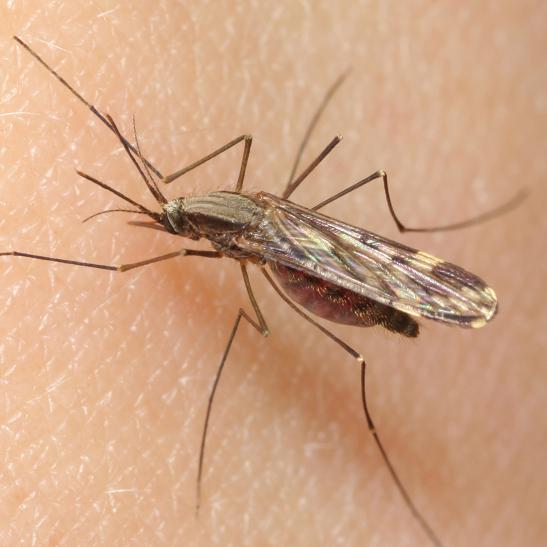 Although the parasite only showed up in white-tailed deer, Martinsen and Fleischer were astonished to find that 18 percent of their eastern U.S. test samples carried the parasite. In Virginia and West Virginia the infection rate climbed to 25 percent.

“Parasites are more diverse genetically than they are by eye, and as it applies to our study, they’re completely hidden,” Martinsen says. “Here we find that we have 18 percent of deer roaming around that are infected with malaria parasites.”

Technically, this is a rediscovery: the same P. odocoilei parasite was found in a white-tailed deer before—but only once, in a single specimen in Texas that had its spleen removed in 1967 to allow hidden pathogens to manifest. Martinsen, an ornithologist and expert in malaria parasite diversity, says P. odocoilei hasn’t been detected in the interim because people were looking with a microscope, and the parasite resides in the blood at such low concentrations that it is virtually invisible.

Mosquitoes infected with Plasmodium parasites transmit the disease-causing protozoans when they bite a host to feed. From what is known from studies of humans the single-celled organism migrates to the host’s liver, where it matures, reproduces and re-enters the blood stream to get picked up by another mosquito and begin the cycle anew. Classic malaria symptoms, including headache, fever, vomiting, jaundice and convulsions, are caused by damage to the liver, blood cells and various other internal organs as the organism passes through its various life stages.

Top row: Malaria parasites contained in blood smears of white-tailed deer as viewed under a microscope on slides prepared during the recent National Zoo study. Bottom row: The same parasite, “P. odocoilei,” in blood smears prepared from a 1967 study on loan from the Natural History Museum, London. Shown are trophozoites (t), gametocytes (g), and schizonts (s).

By confirming its presence through genetics, Martinsen and Fleischer were able to demonstrate that the deer malaria parasite they found is P. odocoilei, the same one described almost 50 years ago in a white-tailed deer. It also showed them where to look, and what to look for. Martinsen spent many hours searching slides at the microscope to visually identify the organism, comparing recent samples with the 1967 original, on loan to the Smithsonian from the Natural History Museum in London.

Like chronic malaria in mammals elsewhere in the world, the parasite load in deer was found to be extremely low—only one Plasmodium parasite occurs per roughly 65,000 red blood cells. The researchers say this may be why the parasite has stayed hidden from view for so long.

“With such low parasitemia [parasite load], it is hard for mosquitoes to pick it up from a blood meal,” said Fleischer, a research zoologist and avian expert. “So it’s a bit of an anomaly. But we did do the math, and mosquitoes are able to pick up a few parasites with a large enough blood meal. Perhaps it has to do more with how common deer are as hosts for mosquitoes.”

The researchers also detected the genetic signature of a second species of Plasmodium that so far hasn’t been physically identified. Only one species of mosquito, Anopheles punctipennis, has been found to transmit the parasite between deer.

While elk, mule deer and other ungulates are free of this species of malaria parasite, its effect on white-tailed deer is still unclear. Low-level infections of malaria in vertebrates elsewhere in the world are correlated with reduced fertility and shorter lifespans. “There is lots of variation in the life cycle of these parasites in different host taxa,” Martinsen says.“In birds the parasites enter various tissues and are not restricted to the liver.”

Risk of transmission to humans is extremely low, Fleischer stresses. Further genetic analysis suggests P. odocoilei seems to have been extant in deer populations for millions of years, possibly even crossing over the Bering Land Bridge with white-tailed deer ancestors. In fact, Martinsen’s and Fleischer’s analysis suggests that the deer malaria parasite is most closely related to a parasite of Old World bats. If it hasn’t yet switched hosts and jumped to humans, it is unlikely to do so now, they say.

This discovery “opens up the possibility that there are a lot of other hidden parasites in mammals, even backyard or common mammals,” Martinsen says. “It highlights the importance of natural history surveys coupled with molecular and genetic methods.”

“And this is one of the best-studied mammals, perhaps any wild animal, in North America,” Fleischer adds.