All bear species except for one live in either temperate or tropical woodlands. Only the polar bear is a stranger to the forest, living and foraging instead across vast expanses of barren polar ice. But don’t be deceived, its habitat is not thin and flat like a skating rink but a thick and complex mix of old multi-year ice, new seasonal ice and open water. Polar bears hunt seals in this environment and live and breed on top of their frozen habitat. Recently, warming temperatures have had an enormous impact on the domain of this remarkable mammal.

A polar bear on an ice floe in Wagner Bay, Canada (Photo by Ansgar Walk)

Q: How many polar bears are found in the wild today?

Q: How much ice does one polar bear require?

Moore: Polar bears range over hundreds and even thousands of miles. They come ashore only when their ice melts in summer, in the Western Hudson Bay for instance.

Q: Can you compare the amount of ice sheets in their ecosystem 10 years ago to now?

Moore: Ten years ago the Arctic Ocean was land-fast with a lot of year-round ice. Recent summer ice losses have been enormous, and in 2012 summer ice losses in the Arctic were larger than the area of the United States. Since Arctic ice is the polar bear’s habitat, bear populations are declining as the ice declines.

Q: Has the polar bear population decreased significantly since you started to study them? 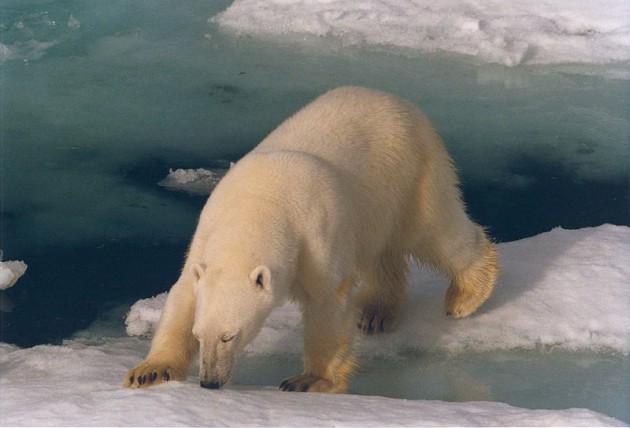 A polar bear on the Islands of Svalbard, the Netherlands. (Photo by Paul W.J. Groot)

Moore: More populations are declining now than before. For example, the Western Hudson Bay population in Churchill, Manitoba in Canada has declined by more than 20 percent in the last 30 years.

Q: When the polar bears’ habitat melts, how do they adapt? Do they use more land to migrate and hunt? What impact does that have on other land animals?

Moore: Polar bears whose habitat melts seasonally must move onto land. But it has been hundreds of thousands of years since polar bears evolved from brown bears. Polar bears are built for eating seals, and cannot live a healthy life for long periods of time eating rodents and plants that brown bears eat. Some have adapted by eating harbor seals or beluga whales, but this behavior will be short-term.

Q: How have changes in the polar bears’ habitat changed the way you conduct your research?

Moore: The Arctic is a forbidding place, and very dangerous to travel in during the 6 months of darkness when winter sets in. Most of my biologist friends take helicopters from land bases to the ice offshore where polar bears live in spring and fall. These times of year can be very stormy, and as the ice has melted it has gotten farther away from shore. Biologists take huge risks flying hundreds of miles by helicopter to the nearest ice. Many researchers have cancelled research trips in recent years so they don’t endanger their study teams.

Q: For most of us, the problems of the polar bear are remote and far away. How do our actions impact these animals hundreds of miles away?

Moore: To help slow climate change we need to change our behavior and put less carbon into the atmosphere. Carbon comes from factories, cars, and other polluting, man-made objects on the planet. If we reduce, recycle and reuse we can reduce the amount of gas going into the atmosphere. Every single person can make a difference and help conserve the planet’s resources.