Changes in North American ecosystems over the past 150 years have caused coyotes to move from their native habitats in the plains and southwestern deserts of North America to habitats throughout the United States. In a new study, published Oct. 17 in the Journal of Mammalogy, researchers from the Smithsonian Conservation Biology Institute’s Center for Conservation and Evolutionary Genetics used DNA from coyote scat (feces) to trace the route that led some of the animals to colonize in Northern Virginia. The researchers also confirmed that, along the way, the coyotes interbred with the native Great Lakes wolves. 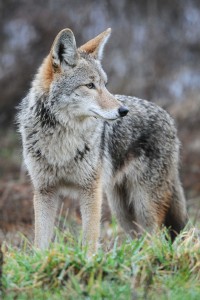 According to the study, coyotes migrated eastward via two main routes—one that went through the northern United States, and one that went through the south. Using DNA samples, the researchers found that Virginian coyotes were most closely related to coyote populations in western New York and Pennsylvania. It appears the northern trekkers eventually encountered the Great Lakes wolves and interbred before converging again on the East Coast. They then gradually headed south along the Appalachian Mountains toward what is considered the Mid-Atlantic region, to an area centered around Virginia.

“The Mid-Atlantic region is a particularly interesting place because it appears to mark a convergence in northern and southern waves of coyote expansion,” said Christine Bozarth, an SCBI research fellow and lead author on the paper. “I like to call it the Mid-Atlantic melting pot.”

Bozarth and her colleagues collected scat samples in Northern Virginia from local coyote populations. They were then able to extract DNA from the intestinal cells in the scat and compare it to the DNA from preserved historic wolf specimens that had lived in the Great Lakes region before coyotes colonized the area. They shared some of the same genes, supporting the hybridization theory. Hybridization between canid species usually occurs when one species is rare. Those individuals may have trouble finding mates and therefore breed instead with closely related species.

“This does not mean that we have massive, wolf-like coyotes roaming around here in Virginia,” Bozarth said. “Coyotes with wolf ancestry have differently shaped jaws, which may allow them to fill different ecological niches. They tend to hunt small prey and scavenge large game, so hybrid coyotes might be helpful in controlling the overly abundant deer population.” 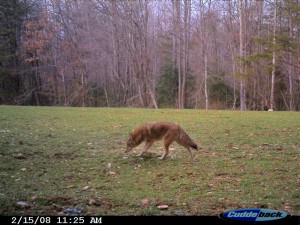 Image right: Camera trap photo of a coyote taken Feb. 15, 2008 at Quantico Marine Base in Virginia. (Courtesy of Quantico Fish and Wildlife Office)

“For the past decade, our lab has developed and used noninvasive techniques to monitor and survey rare and endangered species in various regions of the world and in this study, we were able to show that noninvasive techniques can also be an effective tool for tracking the origins and movement patterns of this elusive canid,” Jesús Maldonado, SCBI research geneticist and paper co-author. “The admixed coyotes have also been found further south, into North Carolina, which brings the hybridized coyote into the range of the critically endangered red wolf, further complicating the issue.”

The study’s authors from SCBI are Bozarth, Maldonado and Frank Hailer (now a postdoctoral researcher at the Biodiversity and Climate Research Center in Frankfurt, Germany). Bozarth is currently an assistant professor in the science, technology and business division at Northern Virginia Community College. The additional authors are Larry Rockwood and Cody Edwards from the department of environmental science and policy at George Mason University.

The Smithsonian Conservation Biology Institute plays a key role in the Smithsonian’s global efforts to understand and conserve species and train future generations of conservationists. Headquartered in Front Royal, Va., SCBI facilitates and promotes research programs based at Front Royal, the National Zoo in Washington, D.C., and at field research stations and training sites worldwide.