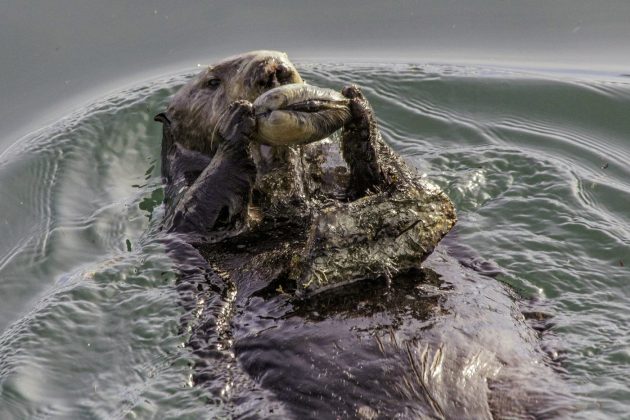 A sea otter cracks open a clam by striking it against a rock balanced on its stomach. (Photo by Jessica Fujii / Monterey Bay Aquarium)

Tool use by sea otters to break open well-armored food is not necessarily a family matter, according to a new study published this week by the Smithsonian Conservation Biology Institute (SCBI) and partners. Unlike previous research that has found that a group of tool-using Indio-Pacific bottlenose dolphins share a common genetic lineage, this study found that tool use in sea otters is ubiquitous and actually has little to do with genetic ties.

“Sea otters and bottleneck dolphins both use tools and they are ecologically similar, so we thought they might have a similar genetic pattern,” said Katherine Ralls, scientist emeritus at SCBI’s Center for Conservation Genomics and lead author of the paper, published March 22 in Biology Letters. “Surprisingly, what we discovered is that sea otters that most frequently use tools are no more related to each other than to the population as a whole.”

Although not all individuals in a population use tools, sea otters commonly use rocks or other hard objects to break open their meals—marine snails, crabs, and abalones, for example. The paper’s authors included in the study individual otters they had observed using tools for at least 40 percent of captured prey. SCBI’s Center for Conservation Genomics analyzed the genetic information collected from individual sea otters along the California coast between 2000 and 2014.

“DNA analysis is critical to better understand our natural world and our world’s natural history, in this case helping us get a better grasp on the little-known world of tool use in marine animals,” said Nancy Rotzel McInerney, manager of SCBI’s Center for Conservation Genomics laboratory and co-author on the paper. “Our lab specializes in obtaining large amounts of genetic information from small amounts of tissue, hair or scat samples from rare and endangered species that are difficult to capture. In this case, we were able to obtain a whole lot of information from a small sample taken when individuals were tagged for identification.”

The International Union for Conservation of Nature Red List of Threatened Species classifies sea otters as endangered. Only 2,000 sea otters existed worldwide by the end of the commercial fur trade in 1911, and the population has been rebounding since, though the species still faces various threats, including attacks by sharks and oil spills.

SCBI plays a leading role in the Smithsonian’s global efforts to save wildlife species from extinction and train future generations of conservationists. SCBI spearheads research programs at its headquarters in Front Royal, Va., the Smithsonian’s National Zoo in Washington, D.C., and at field research stations and training sites worldwide. SCBI scientists tackle some of today’s most complex conservation challenges by applying and sharing what they learn about animal behavior and reproduction, ecology, genetics, migration, and conservation sustainability.