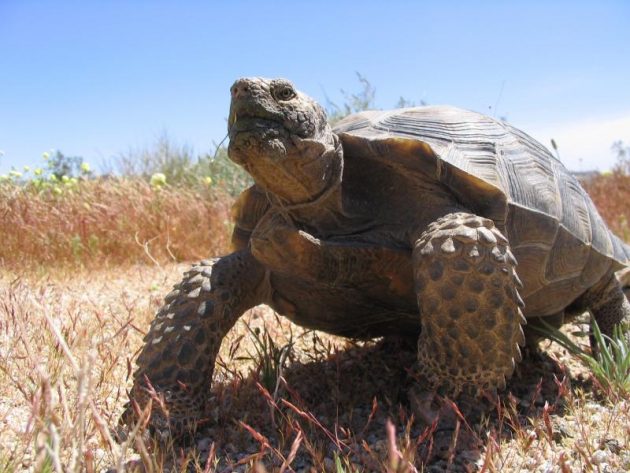 In 2008, SCBI field collaborators worked with the United States Army National Training Center at Fort Irwin to move 184 female tortoises, 293 males and 93 juveniles out of the way of the expanding base into nearby desert habitat that already had tortoises. Photo by Walde Research & Environmental Consulting.

Four years after conservationists relocated 570 desert tortoises (Gopherus agassizii) in California from a threatened habitat to a new nearby location, the tortoises outwardly appeared to have acclimated successfully to the change. Genetic paternity testing of 92 hatchlings by Smithsonian Conservation Biology Institute (SCBI) geneticists, however, has revealed that the translocated males are failing in one key way—they are reproducing at a much, much lower rate than resident males. The findings suggest that for some species, translocation may not be as effective a tool to rescue populations at risk, or bolster genetic diversity and health, as previously thought.

“The fact that none of the hatchlings we tested were sired by a translocated male tortoise is both unexpected and alarming,” said Kevin Mulder, a graduate student in SCBI’s Center for Conservation Genomics and lead author of the study, which was published in Biological Conservation May 23. “Based on measures such as survival and health, the translocated males seem to be doing fine, but when looking at their ability to reproduce they strongly underperform compared to the local males. Although we can only speculate on why this is happening, it is clear that the translocation itself is having a larger impact on the males than meets the human eye.” 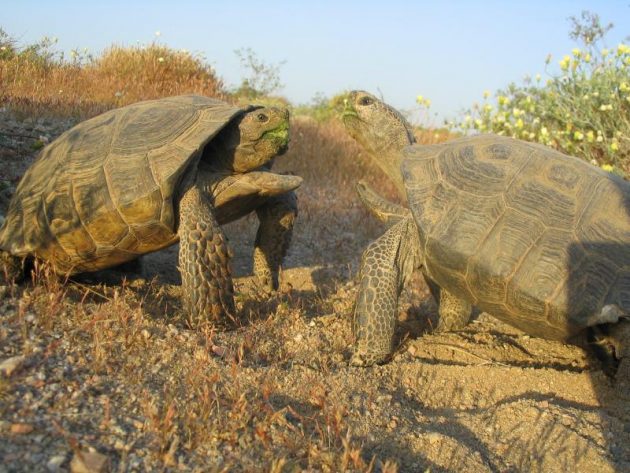 Two male desert tortoises fight on habitat near the United States Army’s Fort Irwin Army National Training Center. According to the study’s authors, translocated males may not be breeding because resident males are competitively excluding the new males. (Photo by Joel Strong)

Translocation is a common conservation strategy used to increase gene flow between populations and to move animals out of harm’s way in the case of habitat loss. In 2008, SCBI field collaborators worked with the U.S. Army National Training Center at Fort Irwin in the Mojave Desert to move 184 female tortoises, 293 males and 93 juveniles out of the way of the expanding base and into nearby desert habitat that already had tortoises. They put radio transmitters on both the translocated tortoises and a smaller group of the resident tortoises to track the effects of combining the two populations. This study is the first to use genetic methods to look at whether males of a translocated population are successfully reproducing and integrating their genes into a resident group.

“It’s much easier through observation to tell which females are successfully reproducing, but only by genetic assignment are we able to get a real handle on the reproductive success of the males,” said Robert Fleischer, head of SCBI’s Center for Conservation Genomics and senior author on the study. “These findings have important implications for the use of translocation as a mitigation tool for the desert tortoise and perhaps for other endangered species. It highlights the important role of genetic tools in conservation, which we suggest should be considered any time conservationists are doing a translocation.” 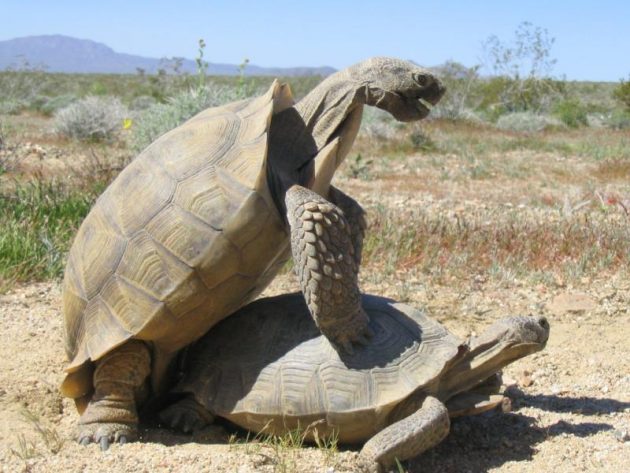 The SCBI study is the first to use genetic methods to look at whether males of a translocated population are successfully reproducing and integrating their genes into a resident group. (Photo by Andrew Walde)

Unlike the males, the female translocated tortoises reproduced successfully at the same rate as the resident females. According to the paper’s authors, there may be a few reasons that the translocated male tortoises are failing to reproduce. They might have had to expend too much energy on adjusting to the new environment, resulting in reduced vigor that makes them less appealing to female residents. Or resident males may be competitively excluding the new males from mating, although there is considerable overlap of home ranges.

In addition to confirming why translocated males are not breeding, the researchers hope to repeat this study in the future to determine if there has been any breeding improvement. In the meantime, conservationists can use the results to consider the best options for managing translocated desert tortoises, including the possibility of relocating only females or breeding sets of tortoises before moving them.

The desert tortoise is a federally threatened species and listed as vulnerable by the International Union for Conservation of Nature’s Red List of Threatened Species. They range throughout the Mojave and Sonoran deserts of the Southwestern United States, north and west of the Colorado River. Their numbers have declined substantially since the 1950s as the result of continued habitat loss and predation.

SCBI plays a leading role in the Smithsonian’s global efforts to save species from extinction and train future generations of conservationists. SCBI spearheads research programs at its headquarters in Front Royal, Va., the Smithsonian’s National Zoo in Washington, D.C., and at field research stations and training sites worldwide. SCBI scientists tackle some of today’s most complex conservation challenges by applying and sharing what they learn about animal behavior and reproduction, ecology, genetics, migration and conservation sustainability.