Scientists studying genetic variation and gene flow in a population of tortoises (Gopherus agassizii) in California’s Mojave Desert, were surprised recently to discover that two roads built in the desert in the 1970s had a noticeable impact on the population’s genetic structure. Tortoise pairs from the same side of the roads exhibited significantly less genetic differentiation than pairs from opposite sides of the roads, the scientists report in a recent paper in the journal PLoS ONE. The study was a fine-scale local genetic analysis of the population, rather than a broad, regional scale, which is more commonly done. 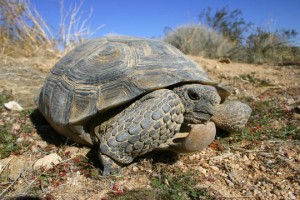 “Roads are barriers to dispersal for lots of species and usually it takes many generations to show up in the genetic structure of an animal,” says one of the paper’s co-authors Emily Latch, a postdoctoral researcher at the Smithsonian Conservation Biology Institute’s Center for Conservation and Evolutionary Genetics, and now an assistant professor at the University of Wisconsin-Milwaukee. “Because tortoises have such a long life span, we didn’t think the roads would influence their genetic structure so quickly, but they did.”

The study shows for the first time that recent landscape features such as roads “can have rapid effects on the genetic structure of a localized population and are detectible almost immediately,” in as little as one generation, the scientists report. As a result, the scientists conclude, “Roads may become increasingly important in shaping the evolutionary trajectory of desert tortoise populations.” 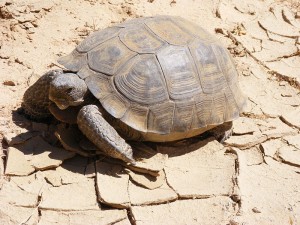 For the study, DNA samples were taken from 859 tortoises living in an area of 23,969 acres. “A huge number of samples,” for such a small area, Latch says. Data also was taken on each animal’s sex, location, and location elevation and slope.

The tortoises were sampled as part of a tortoise relocation effort at Fort Irwin Army Training Center and the animals were located by having people walk map transects in the desert. They picked-up, labeled and took data and DNA samples for every tortoise encountered.

“The adult individuals were initially genotyped to develop a baseline genetic database of translocated and resident tortoises so that family groups hatched after the translocations could be identified to particular parents, and the reproductive success of translocated and resident tortoises compared,” says Smithsonian geneticist Rob Fleischer, head of the Center for Conservation and Evolutionary Genetics and senior author on the paper. “This is important to determine if translocation is really an effective mitigation step. It was serendipity that led to our finding a surprising level of genetic structure.”

Roads may inhibit gene flow in desert tortoises by the reptiles being hit by cars, picked up by travelers, and predation and disease associated with pets released by the roadside. Eroded banks and increased vegetation along desert roads also may provide places for the tortoises to burrow and forage for food, causing them to move along a road rather than to cross it.