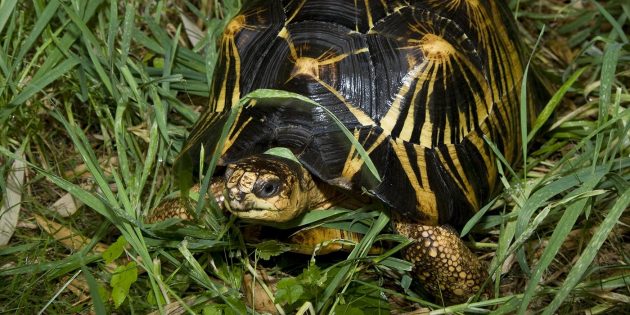 Critically endangered, radiated tortoises sport star patterns on their shells and live in the forests and scrubland of Madagascar. (Images courtesy National Zoological Park. Click any photo to learn more about a specific species.)

People often use the words turtle and tortoise interchangeably, but these reptiles have distinct differences:

Turtle shells are typically more flattened and not as deeply domed as tortoise shells but there are always exceptions to these rules. 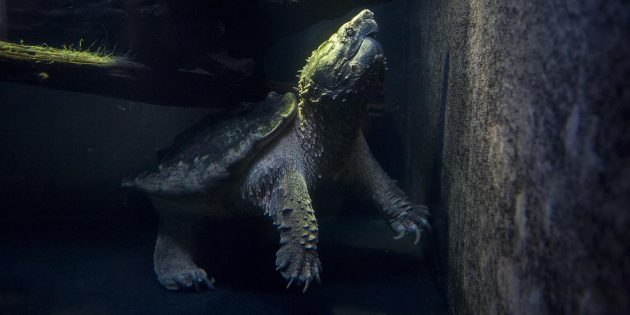 Alligator snapping turtles are the largest freshwater turtles in the world. Their heavy heads, strong jaws and hooked beaks give them a prehistoric appearance, and their carapace, or shell, is spiked.

Most turtles are aquatic or semi-aquatic, while tortoises live on land. Tortoises, however, are often good swimmers.

Both turtles and tortoises are among the most popular animals at the Smithsonian’s National Zoological Park in Washington, D.C., where Assistant Curator Matt Evans in the Zoo’s Reptile Discovery Center says they are one of the most commonly requested animals on VIP tours. 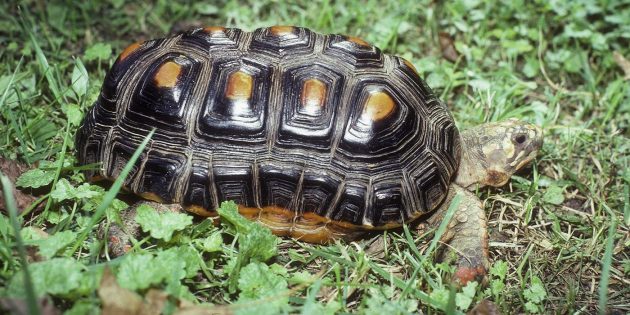 The red-footed tortoise is found throughout South America and on the Caribbean islands of Trinidad and Barbados. These long-lived tortoises have bright red, yellow or orange patches on their legs, tail, and head.

The Zoo considers its enormous, 500-pound male Aldabra tortoises to be “ambassador animals.” “They’re one of those animals people just expect to see when they come here,” Evans says.

A six-year-old spider tortoise fits in the palm of a hand, while an alligator snapping turtle measures more than two feet long. Whatever their shape, size, and age, today is their day. Here are five fascinating facts about turtles and tortoises. 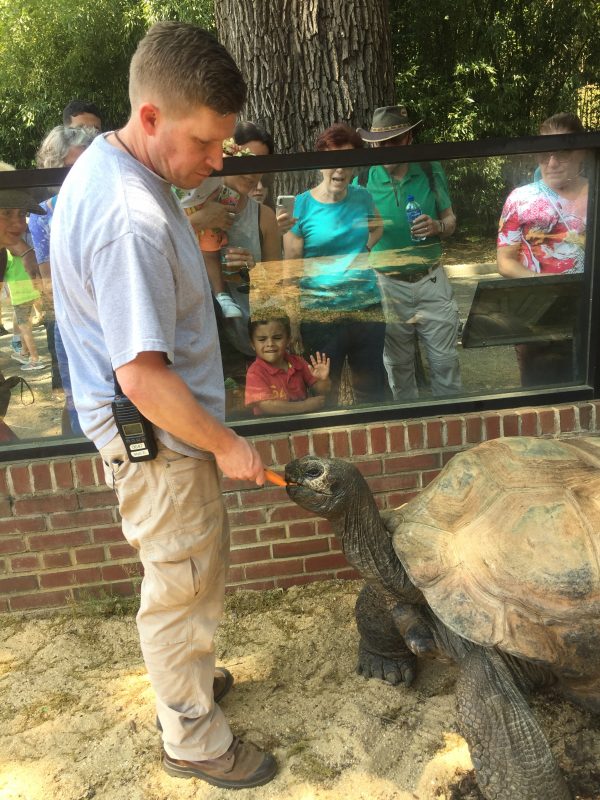 As visitors watch, Matt Evans, assistant curator in the Reptile Discovery Center at the Smithsonian’s National Zoo feeds a carrot to an Aldabra tortoise. (Photo by Grace Foster)

1. Tortoises can live more than 200 years

Aldabra tortoises take up to 40 years (average 25-30 years) to reach sexual maturity but will continue to grow throughout their lifetime. When Alex, one of the Zoo’s Aldabras, came to the Smithsonian in 1956, he was already an adult. That means that by now, he is probably at least 100.

Despite his age, Alex still shows signs of spunk. Several years ago, he shocked his keepers by climbing over a large rock wall that no one thought climbable by a 450-pound tortoise. It took a considerable group effort to heft him back where he was supposed to be! 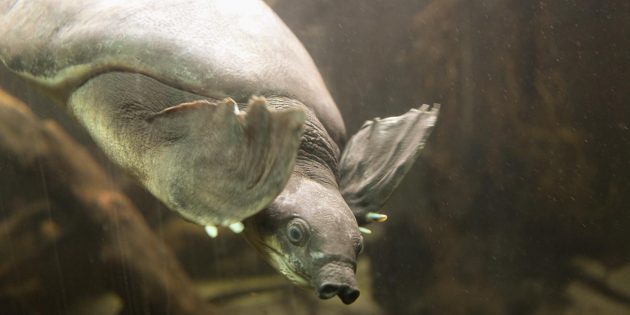 The Fly River turtle, or pig-nosed turtle, is the last living member of the Carettochelyidae family of turtles. With flipper-like forelegs, webbed hind legs and a shell covered in soft, leathery skin, it is well adapted to aquatic life.

2. Turtles are among the most endangered vertebrates.

Habitat destruction, illegal collection, water contamination, and massive harvesting of wild turtles are decimating the world’s turtle population. With only some 330 species of turtles and tortoises, many are on the endangered species list. To put this in perspective, there are an estimated 3,000 species of snakes and 7,000 species of lizards.

In parts of Asia, organs of certain turtle species are believed to have medicinal properties and are illegally harvested by the thousands. Some types of box turtles sell for almost $20,000 each in markets in Thailand. In 2017, the National Zoo successfully hatched a pair of Bourett’s box turtles, as part of an effort to ensure the species’ survival. Scientists estimate only 2,300 Bourett’s box turtles remain in their natural habitats in Vietnam and Laos.

Like snakes, turtles shed as they grow. Instead of skin, they shed scutes or the hard scales on their shells. New growth replaces the peeling scutes, as the turtles become older and bigger. On young turtles and tortoises, it is sometimes possible to count the rings on their scutes to estimate their approximate age. 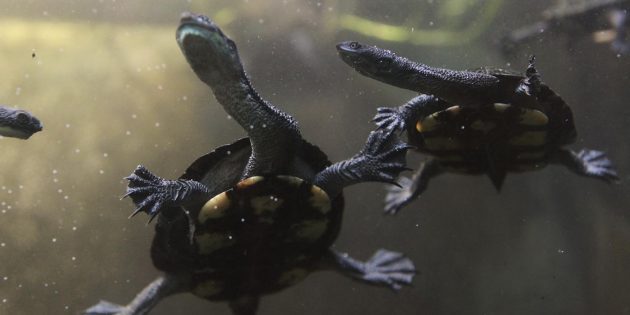 Australian snake-necked turtles, sometimes called common or eastern long-necked turtles, are named for their long, narrow necks. This semi-aquatic turtle is dark gray or brown with a yellow underside and is native to southeastern Australia.

Brumation is a hibernation-like state specific to cold-blooded animals. Like other reptiles, turtles are ectothermic, meaning their body temperature is regulated by their environment. River turtles sunning on rocks are quite literally soaking up the warmth of the sun.

During a fall or winter season, turtles and tortoises become still and slow as their bodies cool down. Some species, like Bourret’s box turtle, brumate from October through March, where they stop eating and just shut down completely, protecting themselves from cool outside temperatures. 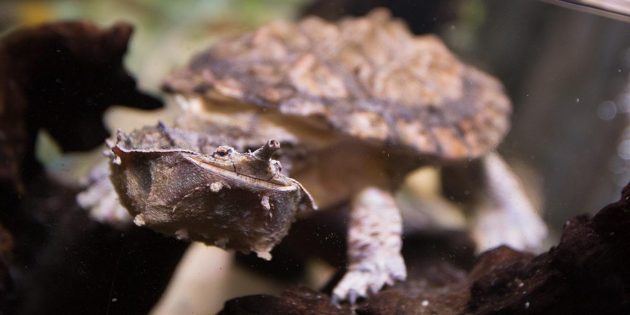 The matamata is a South American turtle with a striking appearance. Its carapace, or shell, is rough and knobby, and its long neck has skin fringes, bumps, and ridges. The matamata turtle’s large, flat head features a wide mouth and a long, snorkel-like snout.

5. Tortoises and turtles have good eyes.

Unlike other reptiles, turtles and tortoises have very good vision and are drawn to bright colors. They are quick to notice bright hues that resemble edible flowering blooms, like on the cacti that thrive in the desert environments some tortoises call home. 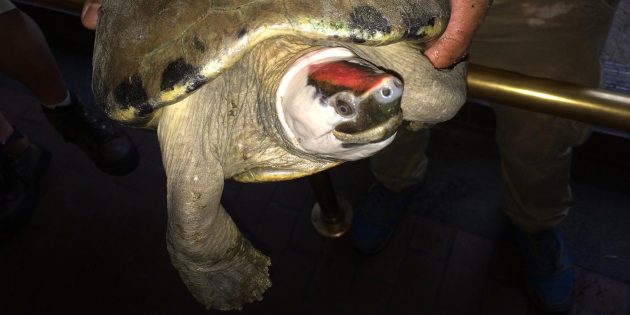 Dull in appearance for most of the year, painted terrapins get their name from their breeding season coloration when they acquire a vivid red stripe on their heads. Critically endangered, painted terrapins are native to the fresh and brackish waters of Southeast Asia.

Whether it’s bright green kale, orange carrots, or pink tennis shoes, turtles and tortoises at the Zoo take notice. Zookeepers use bright colors to target-train the giant Aldabras. At 500 pounds and very powerful, it is best to positively motivate these tortoises to step on a scale or extend their necks and remain still so the veterinarians can get a routine blood sample. 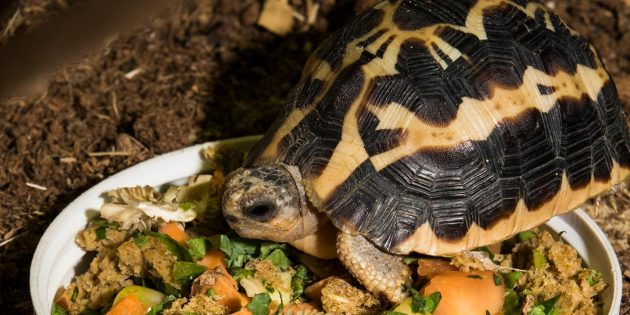 The critically endangered spider tortoise lives only in Madagascar, where it is the smallest of four native tortoise species. It is named for the web-like pattern of yellow lines on its dark brown or black carapace.

Though the Aldabras respond well to training, sometimes the curators do have to step in and apply a little elbow grease to get the tortoises out of certain situations. For example, they like to burrow into holes in the ground, especially when it’s cold and wet. If a food bribe doesn’t work to get them out, keepers have to band together and heft a tortoise out of a hole it’s dug itself into.

(Happy World Turtle Day from the Smithsonian! Click here to learn even more about turtles.)