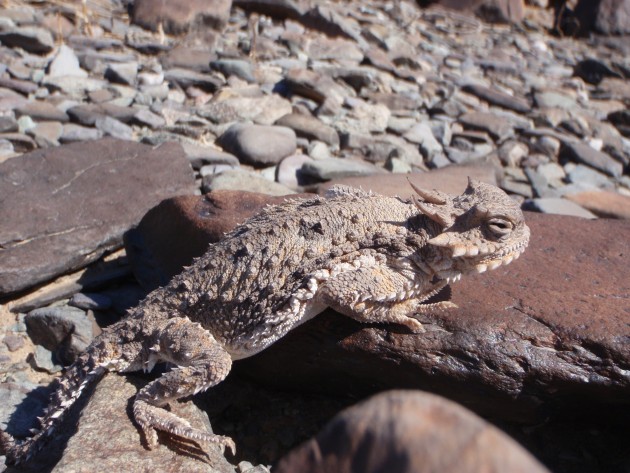 The Mojave Desert and Death Valley are among the hottest, driest places in North America. So how might climate change impact a resilient reptile that has persisted in these deserts for tens of thousands of years?

To answer this question a team of scientists studied DNA from desert horned lizards (Phrynosoma platyrhinos) living across the Southwest, looking back 21,000 years to see how their populations responded following a previous warming period scientists call the Last Glacial Maximum.

To conduct their study, the scientists captured lizards from across the expanse of the desert horned lizard’s range and took DNA samples from each animal’s tail or a toe. Long stable populations show more mutations and genetic divergence in their DNA. This allows researchers to distinguish between populations that have remained in place for long periods and those that have experienced recent expansion. 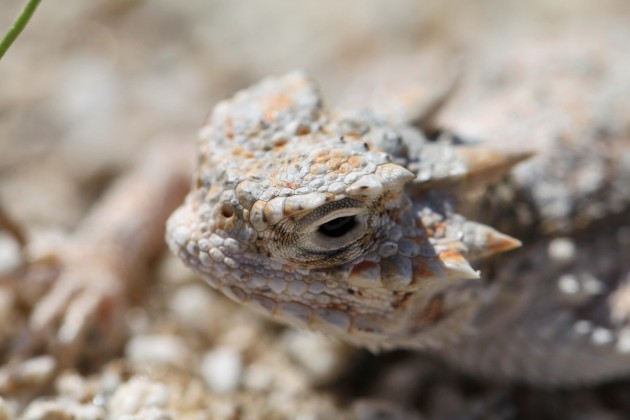 Collected data showed that after temperatures warmed during the Last Glacial Maximum, horned lizards living in the Mojave and Sonoran deserts expanded north into the Great Basin, in areas that are now in Nevada and Utah. This new region had previously been too cool and moist for the horned lizards.

Yet as they expanded into new territory, the horned lizards did not give up any of their old territory, despite the fact that their old territory grew from hot to hotter. “The southern deserts that were their home warmed up, but instead of shifting out of them as we might expect, the desert horned lizard was able to persist,” says Daniel Mulcahy, herpetologist at the Smithsonian’s National Museum of Natural History, and co-author of a recent paper on the study in the journal Ecography.

This plasticity, as scientists call it, is unusual, Mulcahy adds. Faced with rising temperatures, studies show that many animal, insect and plant populations shift geographically to remain inside their “climatic niche,” expanding into one area while withdrawing from former territory. Some species, for example, respond to climate change by shifting to higher elevations up the side of a mountain to stay inside their climate niche. 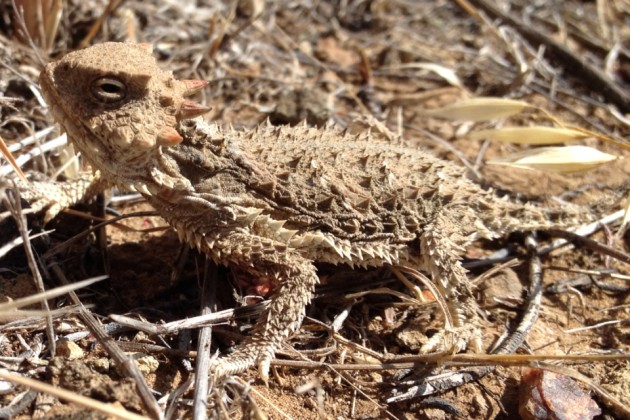 The shift for the desert horned lizard may still occur however, 21,000 years late.

Predicted higher temperatures brought on by global warming promise not to be so kind to the desert horned lizard this time around, Mulcahy observes. The lizard’s challenge is that the Mojave and lower Sonoran deserts are hotter today than they were 21,000 years ago after the Last Glacial Maximum. “Usually, as soon as the sun comes up desert horned lizards are out and active until about 10 in the morning when it gets too hot. They then crawl under a bush or down in a burrow to escape the heat,” Mulcahy says. They dine primarily on ants.

Now, in really hot places like Death Valley, even before 9 a.m., it has begun to reach temperatures these resilient lizards cannot tolerate. “This gives them little time to be active. As a result they can’t build the resources they need to run around and eat insects and build up their fat so they can reproduce. There is just not a large enough activity window for them to survive.”

Researchers have gone out to find historic populations of other desert lizard species, returning to places that are experiencing really extreme temperatures, and the lizards are gone, Mulcahy adds.