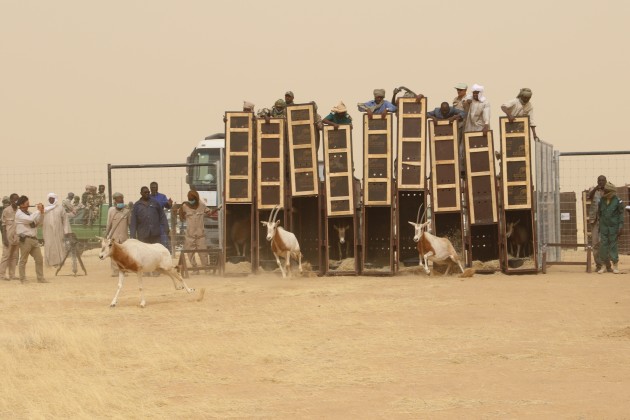 For the first time, scimitar-horned oryx are going to be reintroduced to the wild in Chad. Extinct in the wild since the mid-1980s, the species’ return is the result of the Environment Agency—Abu Dhabi (EAD) and the government of Chad’s Scimitar-horned Oryx Reintroduction Program. Researchers from the Smithsonian Conservation Biology Institute (SCBI) will be working as part of the program to monitor the herd remotely after the reintroduction. A team of rangers trained by EAD and the Sahara Conservation Fund (SCF) will monitor the herd on the ground in Chad.

“This ambitious and historic recovery effort was made possible by the establishment of a ‘world herd’ of scimitar-horned oryx in Abu Dhabi, and a decades-long history of excellence in the care and management of this species in human care around the world,” said Steve Monfort, the John & Adrienne Mars director of SCBI, who was in Chad when the oryx arrived. “Restoring oryx to the wild will have a huge and positive impact on the conservation and management of the entire Sahelian grasslands ecosystem. We are thrilled to play a role in this incredible partnership designed to restore the species to its rightful place in the wild.” 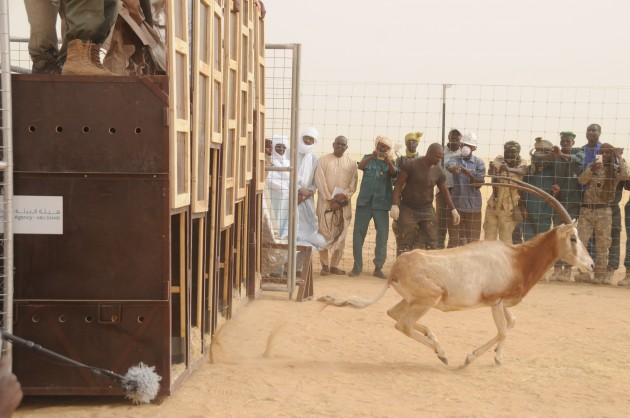 Twenty-five scimitar-horned oryx arrived in Chad by airplane from Abu Dhabi March 16 and were taken to the Ouadi Rimé-Ouadi Achim Game Reserve. It was the first time in 30 years any oryx had been in the country. The oryx will initially be held in a large fenced area to acclimate them to their new home at the Reserve. They will be fully released this summer, when the rainy season makes conditions in their native desert habitat more favorable.

Before the full release of the herd, each oryx will be fitted with a GPS-satellite collar and monitored by scientists at SCBI and the Zoological Society of London. The data they collect will be used to track and help protect the animals, gather behavioral data on the species and study their ecology. The data will help future reintroduction efforts.

The collars were tested on scimitar-horned oryx herds living at SCBI in Front Royal, Va., and at Fossil Rim Wildlife Center in Texas in separate one-month trials. The trials demonstrated that the oryx were not negatively affected by wearing the collars. Before the full release this summer, SCBI scientists will travel to Chad to fit the oryx with collars and conduct final tests of the satellite data transmission and analysis protocols before the animals are released. 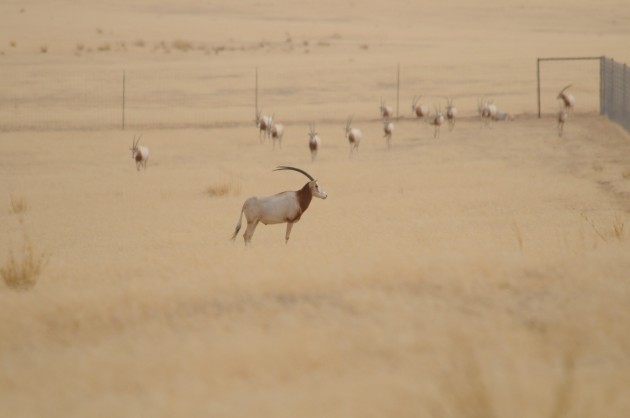 SCF and EAD have also trained a team of local wildlife experts and rangers to monitor the oryx after they are reintroduced. To help with their continued protection, the team will organize community outreach programs about the oryx. The reintroduction program is working to build a self-sustaining population of 500 wild oryx over the next five years. EAD is developing a genetically diverse “world herd” of oryx, including animals originally from the United States, Europe and United Arab Emirates. Those animals will be part of future reintroductions.

Extinct-in-the-Wild Antelope Return to the Grasslands of Chad