Extinct-in-the-Wild Antelope Return to the Grasslands of Chad

Thirty years after the scimitar-horned oyrx were driven to extinction, the desert antelope will return to the last-known place it existed: Chad’s Sahelian grasslands. The reintroduction—the culmination of decades of work—is being led by the Environment Agency-Abu Dhabi (EAD), the government of Chad and their implementing partner, the Sahara Conservation Fund. The Smithsonian Conservation Biology Institute (SCBI) and Zoological Society of London are leading post-release satelite-tracking efforts that will result in the collection of one of the most comprehensive datasets for any wildlife species returned to its native habitat.

“This is an epic homecoming for this majestic species and a significant step forward for wildlife conservation,” said Steve Monfort, the John and Adrienne Mars director of SCBI. “Every conservationist aspires to ensure that wildlife thrive in their natural environment. This project was designed to ultimately give scimitar-horned oryx that chance, while also helping restore this grasslands ecosystem and to inspire and inform similar reintroduction efforts for other species.” 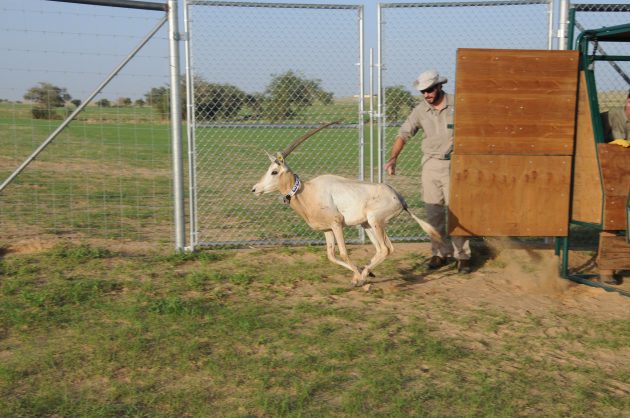 For the first time in 30 years, scimitar-horned oryx are home in Chad, where they acclimated to the desert climate in a large yard before being released back into the wild. (All photos by John Newby, Sahara Conservation Fund)

In July, SCBI postdoc Jared Stabach traveled to Chad where he helped fit 21 of 23 scimitar-horned oryx with GPS collars (two individuals were too young for collars but will return to the wild with the herd). Twice a day, Stabach and team will receive the position of every animal collared. Based on these coordinates, field staff will monitor the population. Overall the data will tell scientists where the oryx go seasonally, how far they travel, whether they stay together or disperse into different social groups, and even if a poacher has taken an animal.

“This dataset is gold to any conservation researcher,” Stabach said. “We know so little about this species in the wild and the data we’re collecting will tell us where these animals are—and what’s going on with them—in near real-time over a number of years. We’re essentially opening up a window that will help us understand how and why individuals move across the landscape and allow us to monitor each individual in a way that was never before possible.” 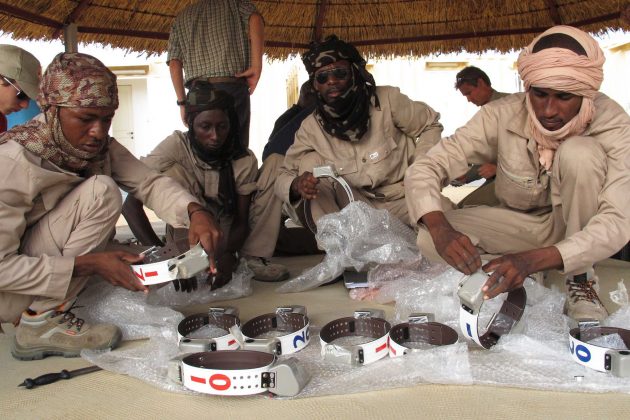 Before fitting the animals with GPS collars, the team had to make sure that all of the collars were functioning properly and transmitting data. (Photo by John Newby, Sahara Conservation Fund)

The GPS collars are programmed to turn on and off at specific times, enabling scientists to monitor animal movements and compare them with landmarks in the environment—from shade trees to water sources to specific kinds of vegetation they like to eat. The collars also report the temperature and the animal’s activity. An accelerometer in the collar can pinpoint an animal’s movement in three directions; as an animal moves its head left to right or up and down, the accelerometer captures this information. SCBI scientists will use this data to assess behaviors, including the amount of time an animal spends eating or avoiding predators. The collars are equipped with a drop-off mechanism that allows scientists to remove the collars without recapturing the animal. This also ensures the animal will not wear the collar for its entire life span. 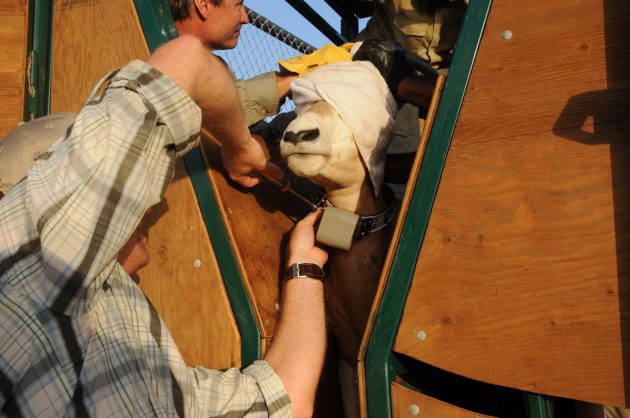 A scimitar-horned oryx is fitted with a GPS collar. SCBI scientists will receive the position of every animal collared twice a day, allowing field staff to monitor the population based on the coordinates.

The project aims to build a self-sustaining population by releasing 500 wild oryx over the next five years. The released animals come from EAD’s “world herd” of oryx, including animals raised in human care from the United States, Europe and United Arab Emirates. A few of the females set for release may also be pregnant, Stabach said.

“If a few calves are born soon after the release, they may imprint on the release site and return periodically,” Stabach said, adding that the team on the ground will provide water at the site during especially dry periods, which may also help to imprint the herd to the location. “It would be a momentous occasion—the first oryx born on native soil in decades.” 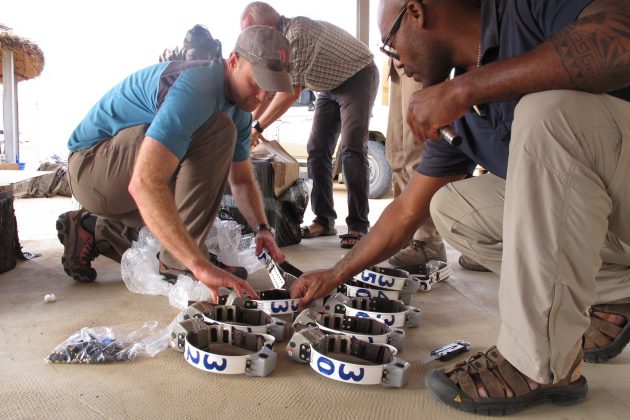 Climate change and human encroachment are among the primary threats to the antelope, which were also hunted to extinction and killed during times of civil unrest in Chad and neighboring regions. They were once widely distributed across the Sahel, from Senegal to Sudan. By releasing the oryx into their native habitat during the rainy season when better resources are available, giving them time to acclimate to the new climate in a large fenced area and hiring rangers to patrol the reserve—project partners are hopeful the animals will now have a better chance at survival.