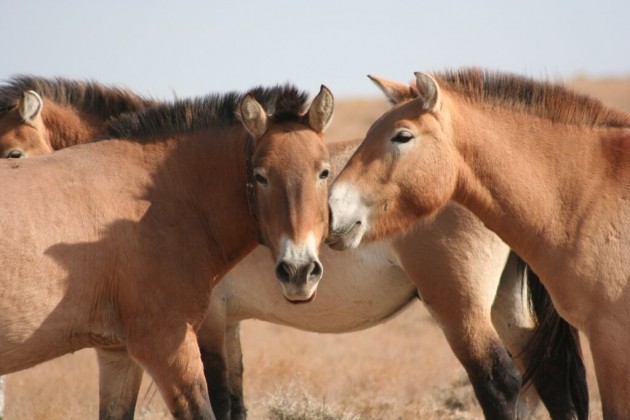 Reintroduced to areas of Mongolia and China in 2001 after being declared extinct in the wild decades earlier, researchers studied Przewalski’s horse interactions with the more abundant khulan to better understand their ecology and habitat requirements. (Photo by Suzan Murray)

If you were dumped into the middle of a desert, your first instinct would be to look for water—it is, after all, the stuff of life. You might even bully other competitors for that water, and that’s exactly what one species of horse did when it was reintroduced into an area where it had roamed free for thousands of years.

Przewalski’s horses or P-horses, as scientists call them are the world’s only true wild horse species; they went extinct in the wild nearly 50 years ago. Through aggressive captive breeding programs using descendants of horses captured for zoos at the turn of the 20th century, Przewalski’s horses were reintroduced to several sites in China and Mongolia, including the Kalamaili Nature Reserve in Xinjiang. Since the first horses were released in 2001, scientists in Xinjiang have been tracking their progress.

In an area that receives less than seven inches of rainfall annually, access to water is the trump card for survival. 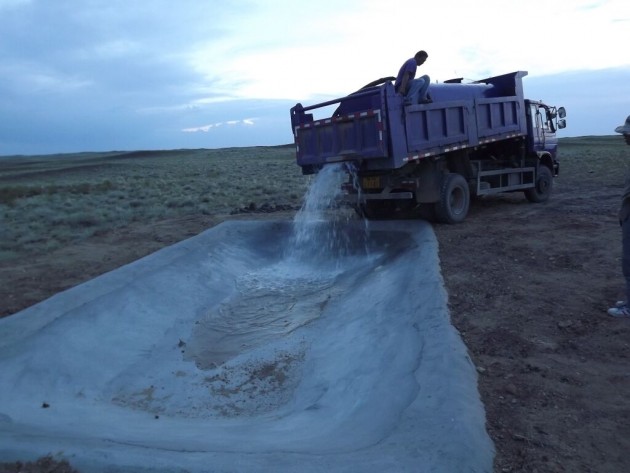 Workers fill a watering trough with fresh water for the wild equine residents of Kalamaili Nature Reserve in Xinjiang, China. Scientists found that Przewalski’s horses outmuscle their cousins, the similar yet much more skittish khulan, in the competition for good sources of fresh water in the dry environment. (Photo by Qing Cao)

In the Kalamaili, several horses didn’t live through their first winter and the Xinjiang Forestry Department decided to round up and feed the remaining horses during the winter seasons. Project leaders asked for help from the Smithsonian Conservation Biology Institute in satellite tracking the horses and studying the ecosystem to better understand the horses’ ecology and habitat requirements.

Melissa Songer and Peter Leimgruber, conservation biologists with SCBI, have worked with Przewalski’s horses for more than nine years. Their objective was to develop a scientific framework to reintroduce and move the horses back into full, year-round release.

Songer and Leimgruber became interested in assessing the horses’ interactions with another native wild equine, the closely related khulan or Mongolian wild ass. They wanted to know if competition for water with species like khulan may have been a contributing factor to their earlier decline. 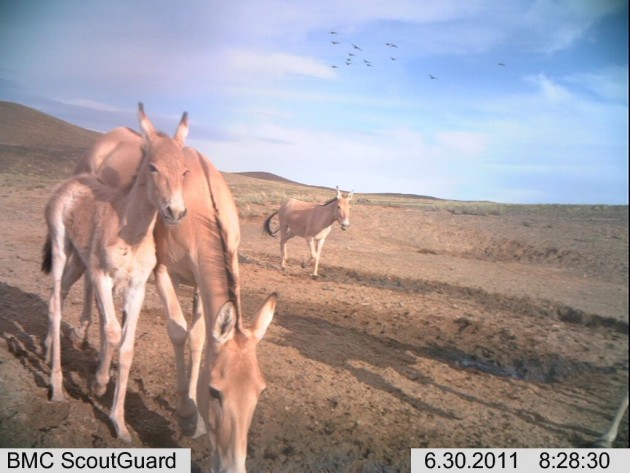 Scientists weren’t sure how reintroduced Przewalski’s horses would behave after being reintroduced to the wild in a Chinese nature reserve, especially as it pertained to sharing scarce water sources. Researchers used camera traps to measure the frequency and location of where wild horses visited to drink, and found that Przewalski’s horses caused a cousin species to alter its habits to avoid confrontation. (Photo courtesy Melissa Songer)

“We didn’t know what to expect since they’ve been out of the wild for a long time,” Songer says. “Now, these two equid species that used to co-exist are coming back together, and it was a great opportunity to look at the competition between the two species.”

In areas where water is more abundant, khulan and reintroduced P-horses drink together without conflict. In Xinjiang, where water is scarce or limited, motion-triggered cameras revealed that P-horses shifted the khulan’s behavior from mostly daytime drinking visits to nighttime visits. The scientists were surprised to see khulan behavior so significantly affected by the P-horse presence.

Though P-horses occupied extremely arid habitats prior to their extinction, some scientists think they originally evolved to live in wetter, greener areas. “Many also assumed they would be more similar to domestic horses,” Songer says. “The challenge has been that they disappeared before any significant ecological research had been done.”

The horses drink frequently during the day to help cope with the punishing heat of the high desert where they now live. Silk Road travelers called them “the wild horse living by the water” and recent GPS tracking studies have verified that P-horses never stray far from reliable fresh water sources.

Yet, pushed to increasingly inhospitable areas by competition with humans and other animals, Przewalski’s horses were forced to adapt to survive.

P-horses’ aggressive defense of high-quality water sites also forced khulan to use poor-quality watering holes, and, because khulan are people-averse, they avoided better watering sites in proximity to human residences (in this study, a park ranger station.) Khulan waited until nightfall to share the P-horses’ favored watering holes, or used more distant, low-quality water source with salinity as high as 10 percent. The average salinity of oceans worldwide is around 3.5 percent. 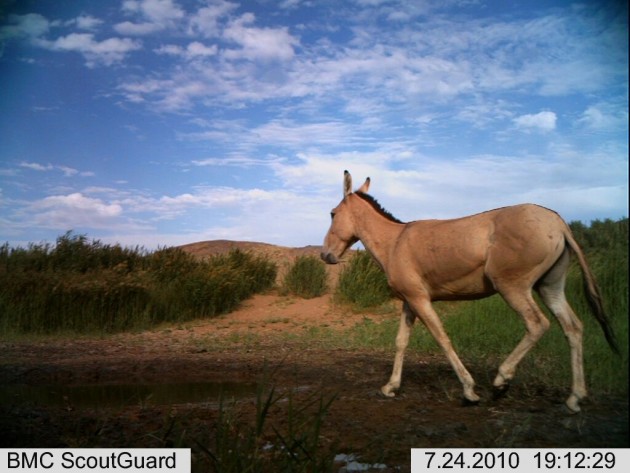 Reintroduced to areas of Mongolia and China in 2001 after being declared extinct in the wild decades earlier, researchers studied Przewalski’s horse interactions with the more abundant khulan to better understand their ecology and habitat requirements. (Photo courtesy Melissa Songer)

Smaller and slimmer, khulan don’t require as much water as the taller, stockier P-horses, and so are better adapted to desert environments. Scientists think khulan can tolerate saltier water in part by restricting their daytime activity.

“In terms of their evolution, they seem to have evolved in these drier environments, as opposed to the P-horses, which evolved in mesic (wetter) environments,” Songer says. “The P-horses were forced into this area. It’s not prime habitat for them, and drinking during the day isn’t ideal. So we think they’re adapting behaviorally.”

Looking at the nature of the competition—or cooperation—between the two horse species for food and water resources is helpful in knowing how to help Przewalski’s horses thrive in the future.

“Part of doing this reintroduction is learning what works and what doesn’t,” Songer says. “Before Przewalski’s horses went extinct in the wild, there hadn’t been a lot of ecological research done, so we were interested to see what would happen here.”