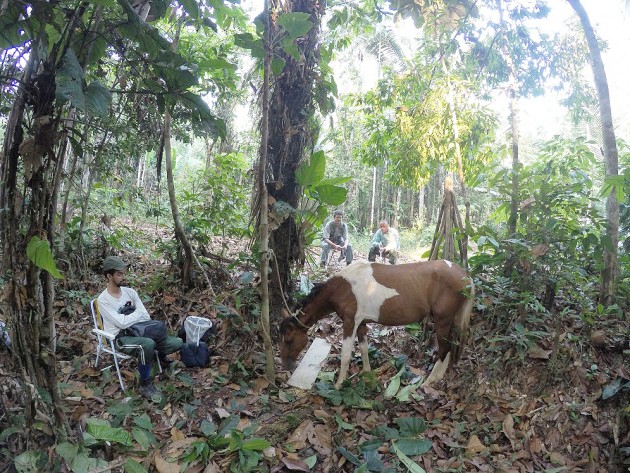 Members of the horse-fly collecting team patiently wait in the jungle with nets ready. (Photo by Mauren Turcatel)

With net in hand and eyes peeled, Mauren Turcatel spent two-weeks last October chasing blood-thirsty predators through the Amazon jungle of Brazil. One-by-one they appeared in the traps she set for them and one-by-one she and her colleagues nimbly captured them and put them on ice for a nap.

“Only the females bite,” Turcatel, Peter Buck Postdoctoral Fellow at the Smithsonian’s National Museum of Natural History, explains of her insect quarry and scientific specialty: horse-flies.

“Horse-fly mouth parts contain two stabbing knife-like blades that lacerate the skin, this is why their bites hurt so,” she adds. “With a mosquito it’s a very tiny, fine needle that you don’t feel. Horse-flies lacerate then let the blood flow out. When it pools they use a softer part of their mouth, called the labella, to drink the blood.”

Female horse-flies need blood for the protein it contains to incubate the eggs they carry. Otherwise, like the males, the female flies feed on nectar and pollen. Some horse-fly species are even important plant pollinators.

Horse-flies are members of the Tabanidae, the largest family of bloodsucking insects, with some 4,500 horse-fly species known worldwide, Turcatel explains. They have been the focus of intense study by entomologists as some are vectors of parasites and disease, including anthrax, tularemia and loa loa.

The Smithsonian’s Natural History Museum holds the largest and most important collection of flies in the world—an estimated 6 million specimens representing more than 50,000 species. Currently a dozen scientists from the U.S. Department of Agriculture, the Department of Defense and the Smithsonian work together at the museum’s Department of Entomology on fly systematics (identification, classification and evolutionary relationships).

Turcatel was in the Amazon on a two-week trip sponsored by the Smithsonian’s Global Genome Initiative, also located at the Natural History Museum, with a goal to collect as many different horse-fly species and genera as she could. The Global Genome Initiative’s six-year goal is to collect and preserve in its new Biorepository fresh DNA-containing tissue from half of Earth’s living plants and animals. Biorepository material is stored in perpetuity in huge sub-zero freezers. Turcatel is one of a number of scientists the Initiative has recently sent to the far (and near) corners of the globe to collect plants, animals and insects.

“Experts in extinction think we may irreversibly commit half of life on earth to extinction in the next 50 to 100 years,” says Jonathan Coddington, Global Genome Initiative director. “We don’t have the technology to bring these species back from the dead but we can at least preserve their genetic material.”

Turcatel chose the State of Amazonas in Brazil as her collecting destination because it has the world’s richest horse-fly diversity, with a total of 84 known species. Collaborating with a team from the National Institute of Amazonian Research, she was able to catch individuals from 32 species, 13 genera, and two subfamilies of horse-flies during her stay. 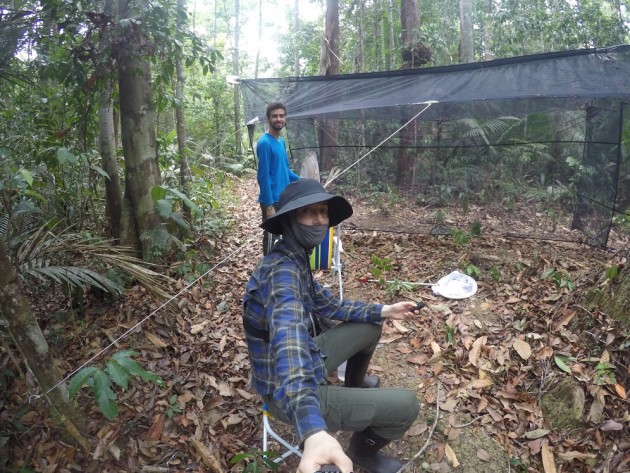 Mauren Turcatel, foreground, and Daniel Dias await for horse-flies to appear in the large malaise trap they have set up in the Amazon jungle. (Mauren Turcatel photo)

“DNA degrades very quickly, so I must catch the flies alive and put them on ice to keep them alive until I come in from the field. Back at the station I identify the flies to species [using as reference voucher specimens of horse-flies borrowed from the collections of the National Museum of Natural History’s Entomology Department] while they are still alive then take off one leg and put it in a labeled vial for CO1 barcoding. The rest of the fly is put in a second vial, labeled, and then dropped into a liquid nitrogen tank (-190 degrees C.) where they die instantly.”

The tank is then shipped to the Global Genome Initiative in Washington, D.C. where the insects inside are put in liquid nitrogen in the Biorepository. Data on each fly is entered into the Biorepository’s detailed database so each species is inventoried and can be easily located. The flies will be preserved in the Biorepository until the day when their DNA is needed for research or to sequence the entire genome of its species.

To make absolutely certain the flies have been identified correctly, DNA from the removed legs is sequenced and the species-identifying gene region CO1 is examined and verified.

During her recent Ph.D. research Turcatel sequenced and examined 10 different gene regions from some 50 horse-fly species to begin assembling a horse-fly evolutionary family tree. “The entire genome is a much richer dataset that gives you the possibility of studying a lot of different aspects, not only the phylogeny,” she says. “But we still don’t have the horse-fly’s complete genome. It hasn’t been sequenced yet.” The cost of sequencing an entire genome is prohibitive but is becoming less expensive year by year. 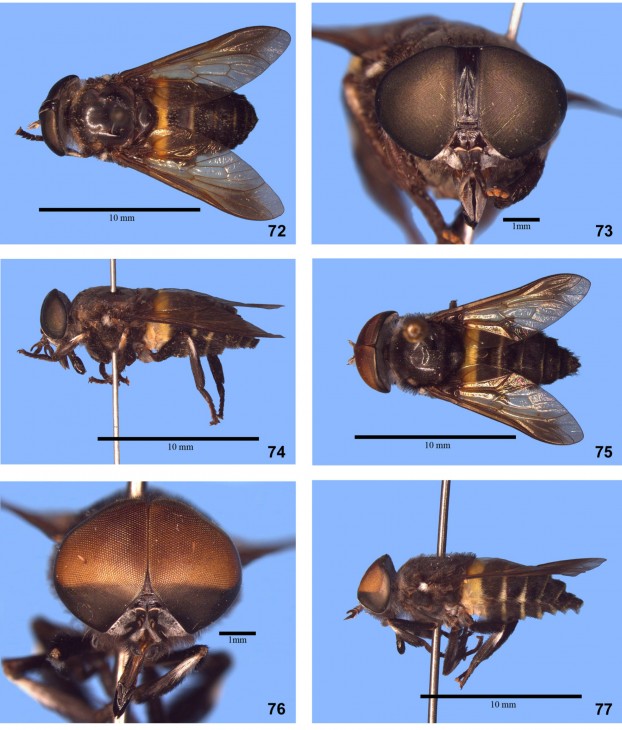 This Brazilian horse-fly “S. ruthae” belongs to a genus that resembles bees, lives high in the forest canopy and is nonagressive. The female, with eyes separated, is at top right. The male, with eyes that meet, is on bottom left.

In earlier research Turcatel helped describe two new species of Brazilian horse-flies (Stibasoma manauensis and S. ruthae) that are nonagressive, live high in the forest canopy and resemble bees (complete with robust bodies, hair-covered legs and yellow bands on their abdomens). Their larvae are usually found in the water that collects in the axils of bromeliad leaves.

The name ‘horse-fly’ (also deer-fly) is something of a misnomer because most species are generalists and will bite any animal—including humans, Turcatel explains. Some are host specific. “One Amazon species only bite caiman crocodiles. They bite them near the eye. I tried to catch that one but it was too hard to find a crocodile.”

Horse-flies have no trouble biting into a horse’s hide through its dense hair. They have even been known to bite through a pair of blue jeans. While the sting of a horse-fly’s bite may alert a horse to the fly’s presence, “when they go for the horse’s back or for the neck or even the legs it’s really hard for a horse to knock them off,” Turcatel explains. “We’ve even noticed different species go for different parts of a horse. Some will attack the back, some go for the head around the ear, some for the belly or the legs and some of them just go wherever they can.”

Different species also are active at different times of the day. “We don’t know the reason but there are some species we would find only when the sun was rising. Others would be active at the end of the morning and beginning of the afternoon. Others appeared when the sun was setting.”

This summer, should you find yourself eye-to-eye with a horse-fly on your skin Turcatel offers up a simple way to determine if it’s a blood-thirsty female or a harmless male. “A male’s very-large eyes meet at the center of their face [a feature known as holoptic],” she says. “In female flies the eyes are spread apart and do not meet [a feature known as dichoptic].”

Despite having collected and studied hundreds of horse-flies during her career, Turcatel has, so far, never been bitten by one. “Never,” she says. “They must know I’m coming for them.”