For scientists who study non-insect invertebrates, the sheer diversity of these odd and fascinating creatures is both intoxicating and daunting. Occupying niches in habitats the world over are a stunning array of mollusks, worms, jellyfish, sponges, crustaceans, corals and other spineless animals representing more than 500 million years of evolution. But where does science begin to organize the vast biodiversity revealed in the morphology of these animals and unlock their genetic secrets, information that could help us understand our own genetic evolution? 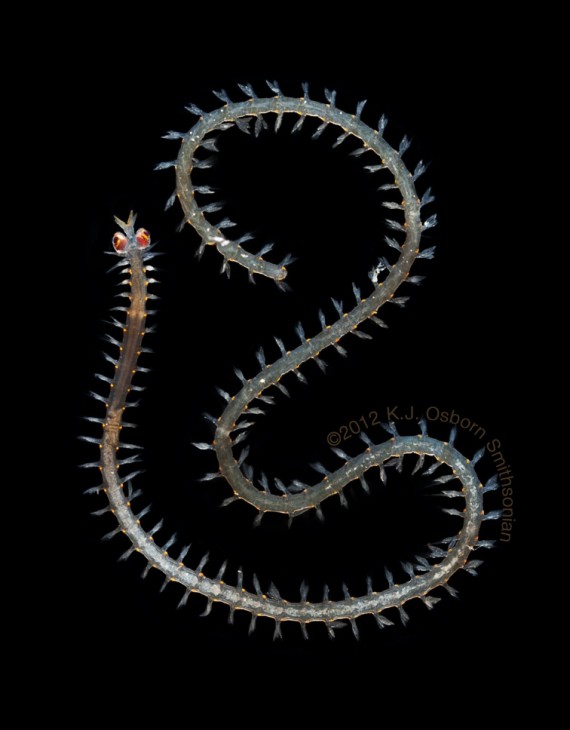 The alciopid polychaete worm or segmented marine worm is related to earthworms. They have very large eyes and presumably use them to find prey and avoid predators in the top few hundred meters of the open ocean. Segmented worms in this family range from a few inches, such as this individual, to more than a meter. They swim in fantastic coiling spirals. (Photo by Karen Osborn)

An important step toward this goal was made recently with the founding of the Global Invertebrate Genomics Alliance, an organization created to bring together the world’s top researchers to sequence the genomes of non-insect invertebrates. GIGA originated at the Nova Southeastern University Oceanographic Center in Florida, spearheaded by Professor Jose Lopez. To find out more about this new alliance, Smithsonian Science turned to Karen Osborn and Allen Collins, zoologists in the Department of Invertebrate Zoology at the Natural History Museum, who are founding members of GIGA.

Q: First of all, what is a genome?

Osborn: A genome is the sum total of the entire genetic code of an organism, all of the genetic information that it contains. DNA is the material that makes up the genome. But a strand of DNA is only one piece of the entire and much larger genome.

When sequencing a genome you can generate tons of raw information but it doesn’t mean anything until you figure out how it all goes together. Once researchers have assembled a genome, essentially mapped out where individual genes and pieces of DNA that regulate the activity of genes fit together, it is typically published in a scientific journal such as Nature or Science. 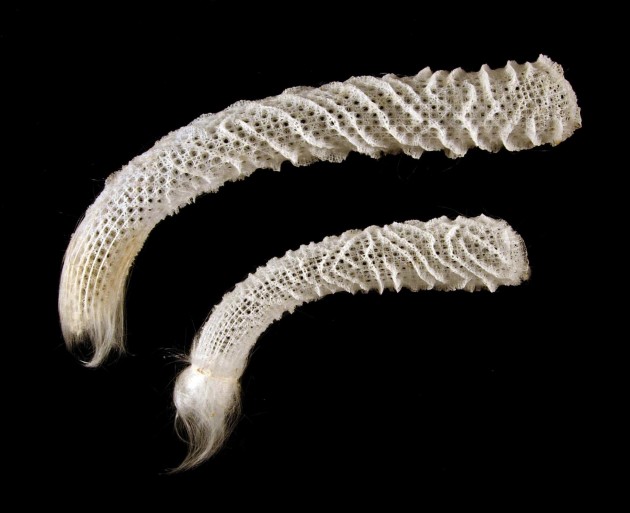 Glass sponges (Porifera, Hexactinellidae) from the Philippines are largely restricted to cold waters. In the geological past, they were common reef-building species and in some places still form cold water reefs. They create structure in deep water habitats often accompanied by a great variety of species. A pair of symbiotic shrimp live their entire lives housed within the delicate lattice-like sponge skeleton. (Photo courtesy Allen Collins)

Q: What is the aim of the Global Invertebrate Genomics Alliance?

Collins: Many, scientists are interested in sequencing the genomes of different invertebrates. The idea behind GIGA is that we all work together to increase the efficiency by which we can get these genomes done. Work for this project is going to be carried out all over the world in multiple labs. GIGA’s objective is to coordinate the efforts of everyone so we are not duplicating work and so that we are focusing on some of the most important and useful invertebrates from the start.

Osborn: Yes. GIGA’s objectives include building a community to get people collaborating on genome projects, and during a workshop of GIGA members at NSU in Florida we hashed out such things as which specific genomes to prioritize for sequencing, standards for collections, sample preparations, and data analysis.

One of the biggest hurdles in working with genomes is dealing with the massive amount of data that is generated. Developing the software tools that everybody can use to analyze and manage all that data is a priority. 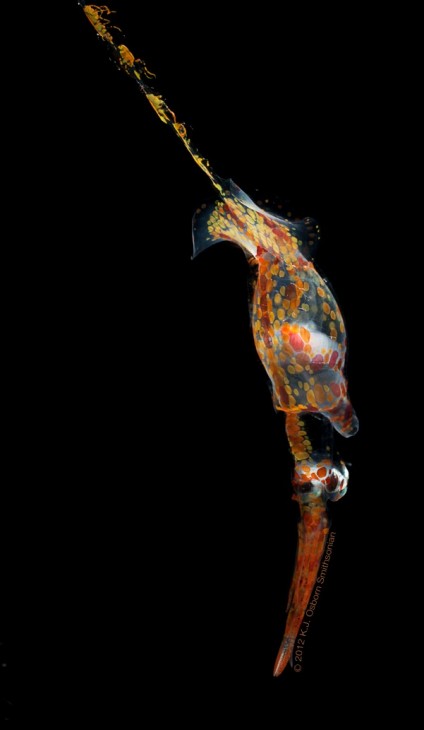 A juvenile squid, “Planctoteuthis oligobessa.” This individual, which is about 5 inches long, changed instantly from nearly transparent to this red/orange when startled by the camera flash. (Photo by Karen Osborn)

While just one genome on its own is interesting, the real power in genomic information is comparing different genomes. With GIGA we may eventually grow its website (GIGA.nova.edu) into a database where scientists can go, pull things up, and compare one animal’s genome to another.

Q: What is the Smithsonian’s role in GIGA?

Collins: One special role the National Museum of Natural History will play is in housing both the archival DNA and RNA used to determine a species’ genome, as well as the actual voucher specimen from which the genetic material was extracted. The genetic material will be stored in the museum’s Biorepository, a cryo-collection of millions of specimens stored at negative 80 degrees Celsius in the Museum Support Center in Suitland, Md. The rest of the animal will be deposited in the NMNH’s more traditional collections. Very few institutions are equipped to do this.

GIGA also dovetails well with another Smithsonian-led project, the Global Genome Initiative, a program to collect, voucher, and genetically characterize all major branches of the Tree of Life. We want to collect genome quality DNA samples from species around the world.  This collection would make it possible to ask questions now and in the future such as: What species live where? How has a species changed?  How did nervous systems evolved in different animals? How did multicellular animals evolve? And really any other questions you can imagine about animals. 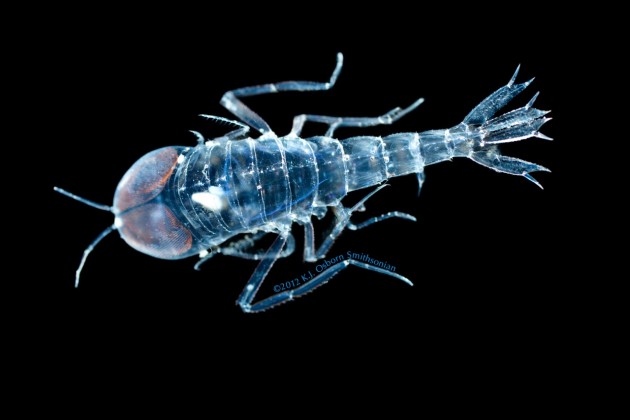 “Cystisoma pellucida,” a hyperiid amphipod (crustacean related to sand hoppers) is similar to a cellophane bag with big eyes. They are completely transparent and their entire head is taken up by their gigantic upward looking eyes. (Photo by Karen Osborn)

Q: What will be the payoff of GIGA?

Collins: It is a natural extension of doing cutting edge biology with more and more types of organisms. As we have learned more and more about the genomes of different invertebrates—which are sort of the non-standard model organisms that we don’t really think of—they have really helped in interpreting how genomes have evolved in the animals that people are generally more interested in, such as humans. So we expect that by sampling whole genomes from across this huge diversity of animals we should get a much better picture of not only genome evolution but also how the genomes are related to creating all these different body plans.

Osborn: There are a host of different biological questions that can be addressed with the genome data and one of the most important ones is how does an individual species react to a changing environment or climate. Some species will actually be targeted by GIGA because we know that the boundaries of their habitat are shifting, for instance warming oceans or changing ocean acidity. Genomes can provide information about how an organism is able to deal with or not able to deal with a changing environment. 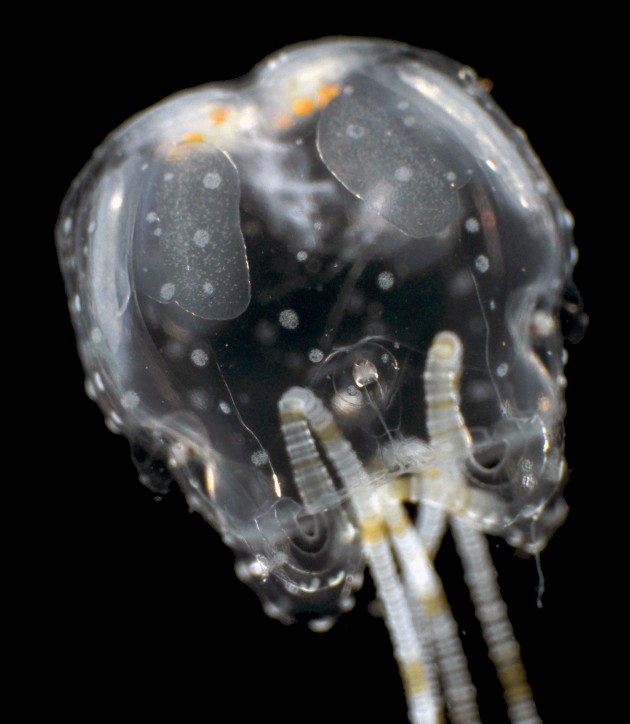 “Copula sivickisi” from Moorea, French Polynesia is a box jellyfish (Cnidaria, Cubozoa). Like other box jellyfish, it has complex eyes capable of vision. This species is also notable because males are easily distinguished from females (sexually dimorphic) and they pair up and mate in sort of an elaborate (for jellyfish) manner. (Photo courtesy Allen Collins)

Researchers might look at an animal’s genome now and then 10 years later look at the genome of that same species again. If its environment has changed dramatically and the animal has adapted to it, researchers may be able to look at particular genes and see how they have changed or shifted how they work over time. If we wait 10 years to collect those animals then we wouldn’t be able to see that. There are many interesting questions you can ask when you have genome-wide information. –John Barrat

A new paper on this alliance “The Global Invertebrate Geonomics Alliance: Developing Community Resources to Study Diverse Invertebrate Genmes,” published in the Journal of Heredity, can be found by clicking this link.