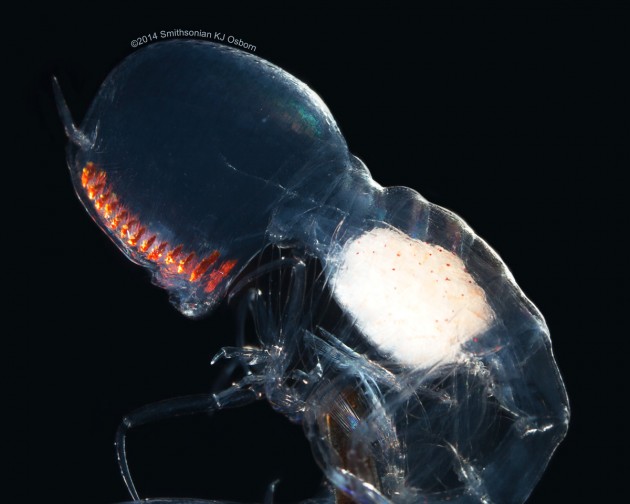 This image is a side view of “Paraphronima gracilis” showing the enormous mostly transparent eyes, row of orange retinas and transparent body with developing gonads (white). (Image by Karen Osborn)

Tiny and transparent the marine crustacean Paraphronima gracilis sees the world through two large eyes that envelope its head like a high-tech space helmet. Now, a new study of this amphipod—a close relative of the sand hopper—reveals that it has 32 different retinas, the light-sensitive parts of its eyes.

“We have never seen the retina split up this way in any other arthropod eye, not in insects, not in crustaceans or other animals with a compound eye,” explains Jamie Baldwin Fergus, Peter Buck Postdoctoral Fellow at the Smithsonian’s National Museum of Natural History, and lead author of a detailed study of this eye published today in the journal Current Biology. “This eye design has not been described previously and its function is unknown.”

Karen Osborn of the Smithsonian’s National Museum of Natural History and Sonke Johnsen of Duke University are co-authors of the paper.

Living at depths of 150 to 500 meters off the coast of California, P. gracilis inhabits an environment that is totally dark to the human eye. As it swims its eyes are positioned upward, looking for prey, transparent creatures called siphonophores, swimming above. 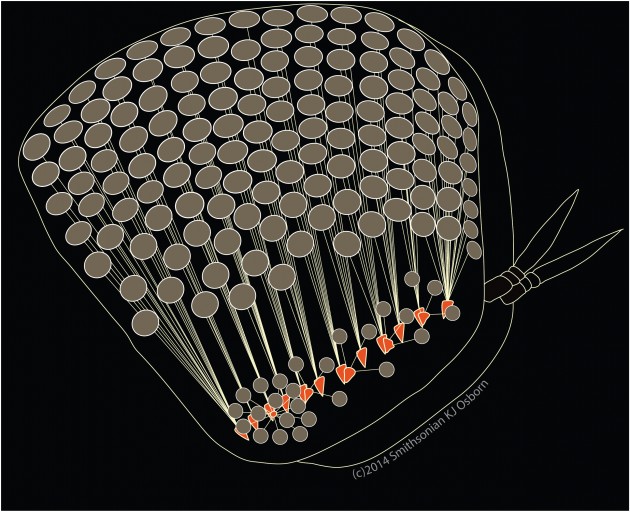 Illustration of the eye of “Paraphronima gracilis” from the side showing the arrangement of facets, light guides, and retinas. Each gray circle represents a light gathering facet attached to one of the orange retinas by fiber optic-like guide tissue. (Image by Karen Osborn)

In most compound eyes the retina is a single continuous pigmented sheet. The 32 retinas in the eyes of P. gracilis appear as a series of tiny orange upside down pyramids neatly arranged in two rows on either side of the animal’s head. Light travels to each retina through a row of transparent facets called ommatidia that cover the eye, collecting light that is channeled through guide tissue similar to fiber optic cables.

Breaking up the retina into tiny segments does not necessarily improve this animal’s ability to camouflage itself, the scientists determined. But their highly unusual retinal arrangement may give them an advantage under the changing light conditions at the ocean depths where they live.

In studying the eyes of P. gracilis, Baldwin Fergus carefully dissected and examined a number of the animal’s eyes, measuring the size, length and angle of the ommatidia to calculate the eye’s light-gathering ability and sharpness of vision. She also studied pieces of P. gracilis retina with a microspectrophotometer to determine what colors of light the animals can see best. 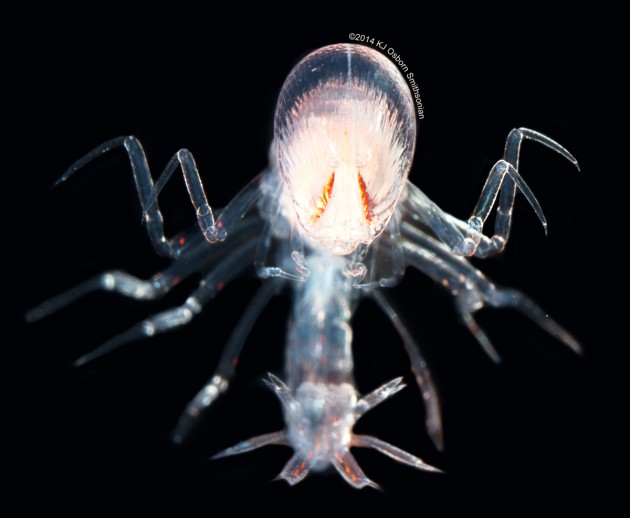 This image is a head-on (anterior/ventral) view of “P. gracilis” showing the two rows of orange pigmented retinas and the size of the head in comparison to the body. All those legs are used to grasp and scurry over their siphonophore prey. (Image by Karen Osborn)

Based on their data the scientists determined that P. gracilis can see objects from 5 to 10 centimeters away. “Based on the color of light they see best, we think they are looking up into the down-welling surface light, searching for shadows” cast by siphonophores above, Osborn says.

“The neat thing about their eyes is that by grouping the light signal from multiple facets, they can see in extremely dim light. The really unique thing about their eyes is that they group the light signal in a way that means they don’t have the typical large loss in resolution–ability to distinguish details–that all other animals who group light signals to see in the dark do. Still cooler… we think they may be able to switch between grouping light signals at depth or at night when there is less light and not grouping signals when in shallower water where there is more light.”

Because they live in the dark areas of the ocean, hyperiid amphipods like P. gracilis have evolved some incredible eyes, Osborn points out. “With about 340 known species, hyperiid amphipods have every variation on eye shape that you can imagine and several you would never think of, from no eyes, to eyes that take up nearly half their body, eyes out on long needles, mirrored eyes, to eyes that can see in 360 degrees.” The eyes of P. gracilis—which make up about 45 percent of its body and have their retinas split up—rank among the oddest, the scientists say. 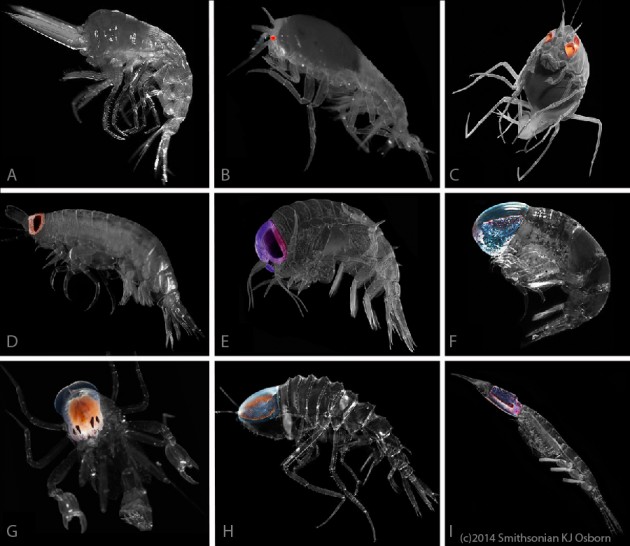 A small portion of both eyes of P. gracilis are pointed sideways allowing the animals to see, the scientists think, bioluminescence from animals beside them.

The scientists say further experiments are needed to unlock the mysteries that surround the structure and function of the unique eyes of these animals, the design of which is found nowhere else in nature.