Smithsonian scientists and colleagues report that snails successfully crossed Central America, long considered an impenetrable barrier to marine organisms, twice in the past million years—both times probably by flying across Mexico, stuck to the legs or riding on the bellies of shorebirds, and introducing new genes that contribute to the marine biodiversity on each coast. 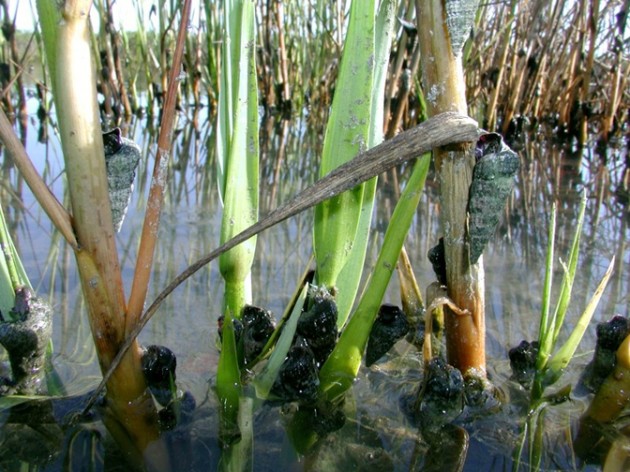 “Just as people use airplanes to fly overseas, marine snails may use birds to fly over land,” said Mark Torchin, staff scientist at the Smithsonian. “It just happens much less frequently. There’s also a big difference between one or two individuals ending up in a new place and a really successful invasion, in which several animals survive, reproduce and establish new populations.”

The discovery of the hitchhiking snails, published in Proceedings of the Royal Society: B, has broad implications. “Not only snails but many intertidal organisms may be able to ‘fly’ with birds,” said first author of the study, Osamu Miura, assistant professor at Japan’s Kochi University and former postdoctoral fellow at the Smithsonian Tropical Research Institute in Panama.

Chance events that occur only once in a great while may be extremely important in the history of life. In 1940, George Gaylord Simpson, who studied natural history as recorded in fossils, coined the term “sweepstakes dispersal” to describe the unlikely events in which animals cross over a barrier resulting in major consequences for the diversity of life on Earth. Simpson was thinking about land-based animals that might “get lucky” and cross between continents or islands by floating on rafts of debris. Sometimes such events result in devastating biological invasions—introducing new diseases, wiping out resident species or causing economic damage to food crops. 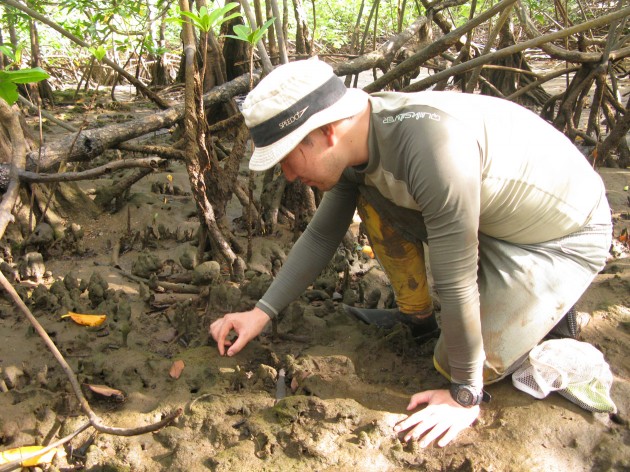 The idea of land snails hitching rides on birds goes back to Charles Darwin, who speculated that migratory birds could transport snails to distant places. In fact, birds are thought to have carried land snails 5,500 miles from Eur

ope to Tristan de Cunha Island in the South Atlantic Ocean and back. But this is the first report of a marine snail “flying” from one ocean to another.

Scientists working at the Smithsonian in Panama have long been interested in how the rise of the Central American land bridge more than 3 million years ago drove speciation and increased biodiversity. It formed a barrier between marine species, some of which evolved in their new surroundings, becoming new “sister” species that could no longer mate with their former relatives.

By studying the genetics of two sister species of horn snails, Cerithideopsis californica and C. pliculosa, collected at 29 different locations in mudflats and mangrove habitats from California to Panama on the Pacific and from Texas to Panama on the Atlantic, the researchers discovered that, about 750,000 years ago, these snails invaded the Atlantic from the Pacific, and then, about 72,000 years ago, Atlantic populations returned to invade Pacific shores.

“Shorebirds mostly move back and forth across Central America via a couple of flyways,” said Torchin. “We think that the snails were able to cross the Isthmus of Tehuantepec in Mexico because it’s a major bird flyway and is a relatively flat and narrow stretch of land with ideal tidal flat habitat on either side.”

“There is a chance that the hitchhiking snails benefited native populations by bringing in new genes that helped them resist common parasites that castrate the snails and keep them from reproducing,” said Ryan Hechinger, associate research biologist at the University of California, Santa Barbara. “Now we are looking at the parasite genes to see if they jumped Central America too.”

“Understanding that such hitchhiking occurs can help reveal where new species might have become established or where they might establish in the future,” said Eldredge Bermingham, STRI director and staff scientist. “I am here in Panama watching as snails fly over my head. Tongue in cheek, I fail to understand why others did not notice this before! I suspect our interpretation of this phylogeographic pattern would make George Gaylord Simpson smile.”