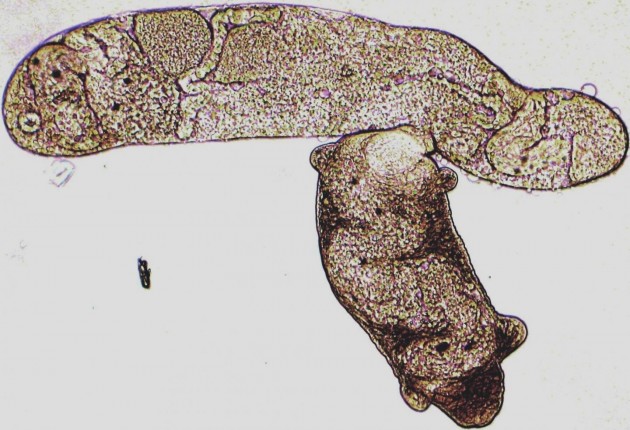 A trematode worm bites and sucks out the insides of an enemy species, with the eyespots of the victim’s offspring still visible inside the attacker’s gut. At least 20 species of trematode compete to parasitize and castrate marine horn snails (Cerithideopsis species), and such predatory interactions are more frequent in the temperate zone than the tropics. (Photo by Ryan Hechinger)

The odds of being attacked and castrated by a variety of parasitic flatworms increases for marine horn snails the farther they are found from the tropics. A Smithsonian-led research team discovered this exception to an otherwise globally observed pattern–usually biodiversity is greatest in the tropics and decreases toward the poles. The study, published in Ecology, makes a case for using host-parasite relationships as a tool to understand why there are typically more species–and more interactions between species–in the tropics than anywhere else in the world.

“Parasites must use hosts as their habitats,” said co-author Osamu Miura, former postdoc at the Smithsonian Tropical Research Institute in Panama and associate professor at Kochi University in Japan. “Wide-ranging hosts provide a nearly constant habitat for the parasites, regardless of latitude.”

Such host-parasite systems are thus particularly useful for testing hypotheses about global biodiversity trends. Generations of scientists have tried to explain why biodiversity decreases from the tropics to the poles–a pattern known as the latitudinal diversity gradient. Suggested hypotheses include greater seasonal stability, more complex food webs, faster speciation rates and lower extinction rates in the tropics relative to higher latitudes. Because many of these variables influence each other, it is hard to test the effects of one factor independent of the rest. 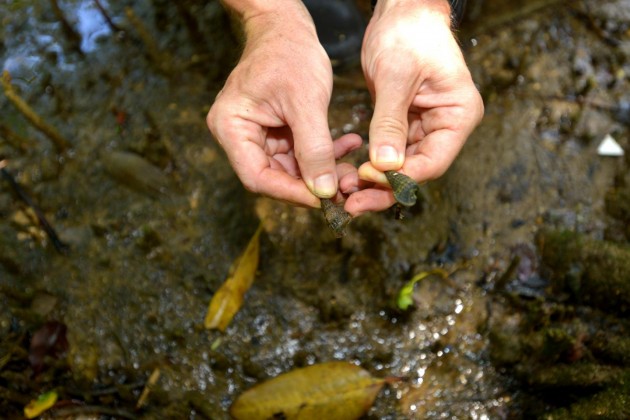 The Pacific horn snail (Cerithideopsis californica) and Atlantic horn snail (C. pliculosa) are two closely related species found in estuaries along the coasts from the tropics up into the temperate zone. Since they are broadly distributed across varying habitats, and host several species of parasitic flatworms under their shells, these snails provide scientists with an ideal opportunity to study questions about how diversity changes with latitude. (Photo by Sean Mattson/STRI)

“The cool thing about horn snails and their parasites is that we can actually test hypotheses about biodiversity,” said lead researcher Mark Torchin, a staff scientist at the Smithsonian Tropical Research Institute. He explains that even across a widely variable geographic range–along the Pacific and Atlantic coasts from Central America to the subtropical United States–the horn snails serve as natural, standardized habitats for measuring parasite diversity. “It lets us do a real, apples-to-apples comparison when the habitat–the snails–is the same across this broad geographic region.”

The Pacific horn snail (Cerithideopsis californica) and Atlantic horn snail (C. pliculosa) are two closely related species widespread in estuaries along the coasts from the tropics to the temperate zone. At least 20 species of trematode–a kind of flatworm–compete to parasitize and castrate the snails. The trematodes produce offspring that leave the snails and eventually infect migratory sea birds. So although the snails are restricted to their local habitat, the trematodes themselves are spread across vast distances by the birds.

Co-author Ryan Hechinger, professor at the University of California, San Diego’s Scripps Institution of Oceanography, explains that the parasites’ unusual life history allows the research team to simplify the question of how the latitudinal diversity gradient arose. Because the trematodes spread so quickly up and down the coast, they could rule out speciation rates as a factor affecting their pattern of distribution. 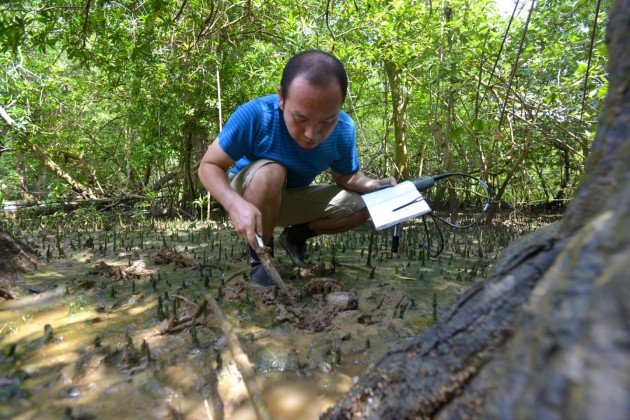 Former Smithsonian postdoctoral fellow Osamu Miura searches for marine horn snails (Cerithideopsis species) in Bique, Panama. The snails are restricted to estuaries, and are widely distributed along the Pacific and Atlantic coasts. Miura and colleagues collected snails in five countries across 27 degrees of latitude, from Central America up into the subtropical United States. (Photo by Sean Mattson, STRI)

“So, if greater speciation rates cause the normal diversity gradient–decreasing from the temperate zone to the tropics–and if we preclude that from being a factor, we shouldn’t see the usual pattern for these trematodes,” Hechinger said. “That’s exactly what we see in our study, suggesting that speciation does play a role in creating the normal latitudinal diversity gradient.”

The research team collected snails and parasites from 43 field sites spread across five countries and 27 degrees of latitude in the Pacific and Atlantic Ocean, and found that parasite prevalence, diversity and competition rates all increased with higher latitude in a reversed diversity gradient. The reversed pattern suggests that local ecological factors also have a part to play in shaping biodiversity. In the tropics, environmental instability–such as from hurricanes or storm runoff–and greater snail death rates might decrease the available pool of snails for trematodes to parasitize. Conversely, greater stability and larger snail populations in the temperate zone sustain higher trematode species diversity over time.

The co-authors note that there are advantages to paying attention to parasites, which are generally overlooked despite being found everywhere. Apart from some research on humans, for example, there are few comprehensive studies looking at how parasite diversity changes in a single, wide-ranging species across latitude. Since the latitudinal diversity gradient generally holds true across the world, it remains important to understand how and why this pattern exists. “We now have a plan to conduct similar research in Asia to test the robustness of our findings on the other side of the world,” said Miura.