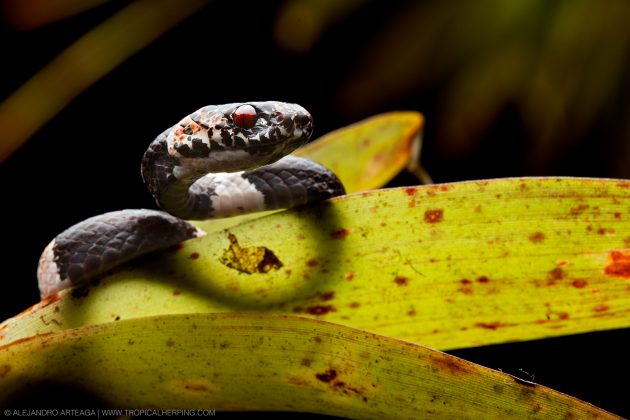 This new species of snail-eating snake “Dipsas bobridgelyi” was named after an American ornithologist and conservationist. (Photo by Alejandro Arteaga)

Five new species of snail-eating snake, from a group of snakes affectionately known to scientists as “goo-eaters,” have been discovered by a team working in Ecuador and Peru.

The scientists—from institutions in Ecuador and the U.S., including the Smithsonian’s National Museum of Natural History—found the striking new snakes during a four-year expedition in rainforest and dry tropical forest habitats.

The five news species are all nonvenomous, tree-dwelling snakes belonging to the genera Dipsas and Sibon. They raise the number of known snail-eating snakes to 75, according to a new study published last month in the journal ZooKeys. 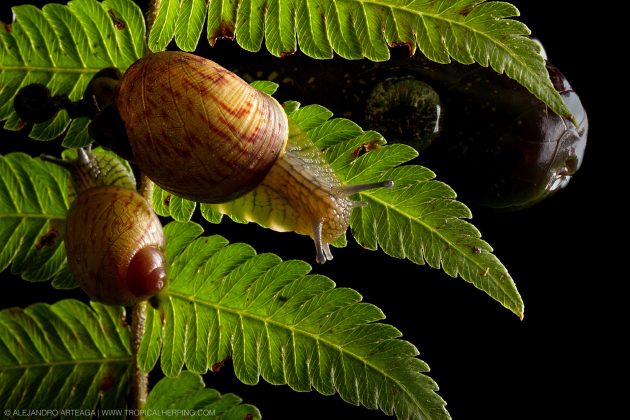 How do you know if you have discovered a new species?

Discovering a new species is rarely a simple “Eureka!” moment. Finding an animal in the depths of a rainforest is a mammoth task in itself that takes skill and patience. Deciphering what it is can take many more months and a museum.

“Wherever we are, Brazil, Ecuador or Peru, in all of these places we have a rough idea of what species are there based on the collections that have been made in the past,” explains Alex Pyron, the Robert F. Griggs Associate Professor of Biology at George Washington University and a research collaborator at the Smithsonian’s National Museum of Natural History. 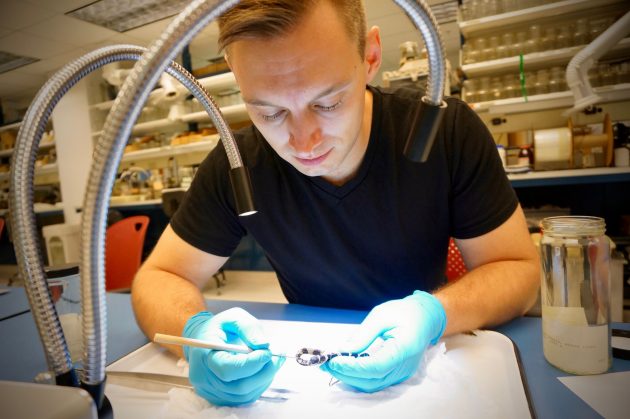 Alex Pyron counts the scales on the paratype specimen for the new species Dipsas klebbai, in the reptile collection of Smithsonian’s National Museum of Natural History. The specimen was collected in 1979 by Smithsonian Curator Roy McDiarmid. (Photo by Micaela Jemison)

“When we find something spectacular like these new snail-eating snakes, you pretty much immediately have a hunch that it’s a new species, but you need to compare it to the other known species first. At the Smithsonian’s National Museum of Natural History we have a very good series of Ecuadorian snakes and frogs in the collection. Those specimens were the key lynchpin in allowing us to determine that these were new,” Pyron says.

It took hours of counting scales, examining color patterns, and comparing measurements and DNA between the museum specimens and the 85 snakes caught in the field to reveal the five species were new to science. And as is often the case, the researchers discovered that some of these new species already existed in the Smithsonian’s collection.

“We found that some of the new species had actually been collected in the 1970s and had not been identified. So, they were able to be designated as type specimens,” Pyron says.

Do snail-eating snakes really suck snails out of their shells?

Forget how you think these snakes devour their gooey prey. The reality is much cooler. 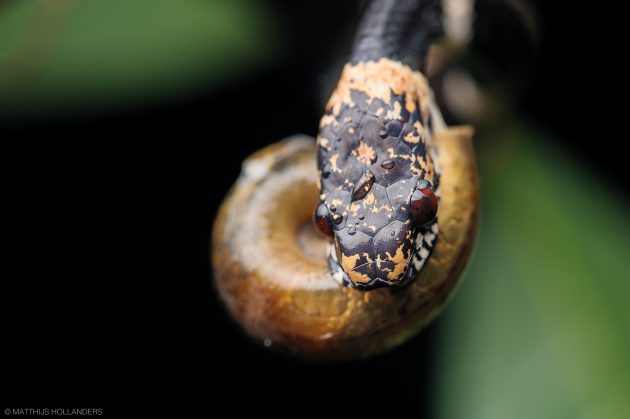 “Dipsas bobridgelyi” trying to suck a snail out of its shell. (Photo by Matthijs Hollanders)

“Their teeth are curved backwards, so they basically slide their jaw into the snail shell and then grab the snail and sort of ratchet it out,” Pyron explains.

The ratcheting motion is achieved by the snake’s uniquely adapted jaw structure. Unlike a mammalian jaw which is one solid piece built for brute force, a snake’s is rigged with tendons, muscles and ligaments, allowing the left and right sides to move independently.

“So if you can imagine the snake’s lower jaw going into the snail shell and then it kind of bobbing back and forth as it slides each side in and out, eventually they just ratchet the entire snail out of the shell and swallow it whole,” Pyron says.

The snake leaves the shell behind, which often falls to the ground. 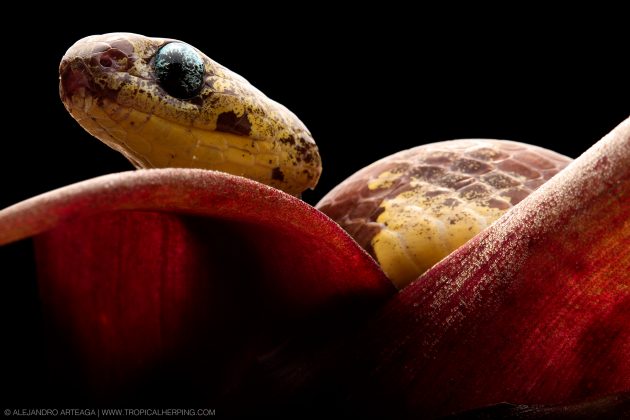 “Sibon bevridgelyi” is arguably the prettiest of the newly named snakes. (Photo by Alejandro Arteaga)

What makes these snakes unique from other arboreal, or tree-dwelling, snakes?

With their prey moving literally at a snail’s pace, it is not surprising that snail-eating snakes are not built for speed.

“A lot of other arboreal snakes are long and slender and they move quickly from tree and tree or from bush to bush. These guys are very slow and deliberate, and have a more stocky body that is more adaptive to their slow-moving lifestyle and their slow-moving prey items,” Pyron explains.

Spotting their prey in the dark amongst the rainforest leaves does require good eyesight. 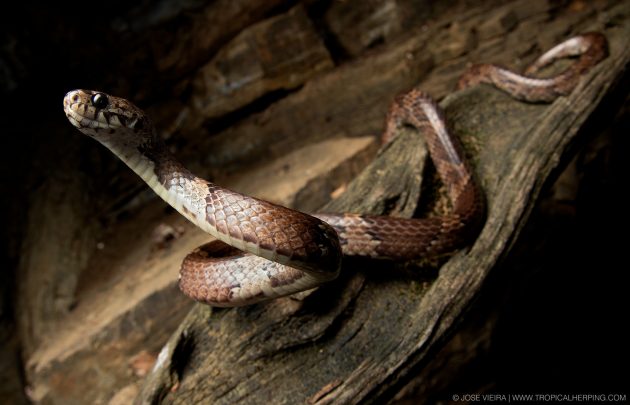 “They also have extremely large eyes which gives them very high visual acuity. A lot of arboreal snakes also have this, as they primarily hunt at night,” Pyron says.

What do we know about their habitat?

Several of the newly discovered snail-eating snakes are already recommended for the endangered species list due to the habitats in which they live.

“Some of these species are found in the tropical rainforest on the western side of the Andes along the Pacific coast. It is a very narrow strip of land and so there wasn’t much forest there to begin with. It has been an area that has suffered particularly high human exploitation for hundreds of years. At this point about 97 percent of the original forest is gone,” Pyron explains.

So while scientists may only have encountered a few individuals of each of these new species, the fragility of their habitats may automatically place them in peril. 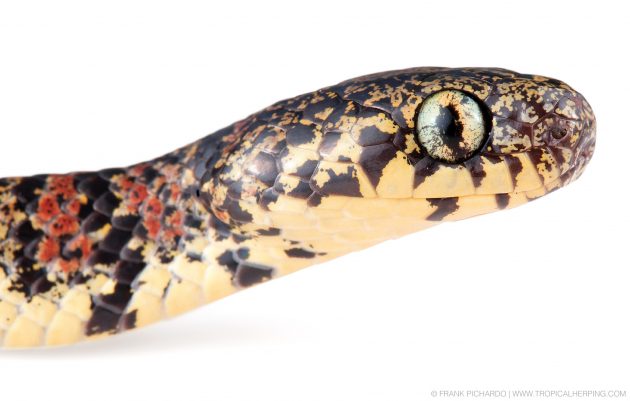 “They may have healthy populations or their populations might be declining, we don’t have any data on that. Either way we know they are in high peril from further habitat encroachment,” Pyron says.

This is what led Tropical Herping, a conservation initiative connected to the study, to auction off the naming rights for each of the species to raise money to purchase land for their conservation.

In the rain forests of Ecuador, Dipsas klebbai and Dipsas oswaldobaezi were named for patrons Casey Klebba and Oswaldo Báez, along with Dipsas georgejetti named after Rainforest Trust member and photographer George Jett.