It is related to one of the world’s most destructive invasive species, and possibly the slimiest. Thirty-five pounds of live giant West African snails (Archachatina marginata) were stopped this month by U.S. Customs and Border Patrol agents at the Los Angeles Airport. The slow-moving mollusks were being imported from Nigeria to San Dimas, Calif., as food.

Some people keep these charismatic mollusks as pets.

While U.S. Customs agents successfully stopped this latest bunch of giant West African snails from entering California, a relative, the giant East African snail (Archachatina fulica) is already well established across the Hawaiian Islands. Florida is fighting a second invasion. It took 10 years and millions of dollars to eradicate Florida’s first African giant snail invasion that was discovered in the late 1960s. 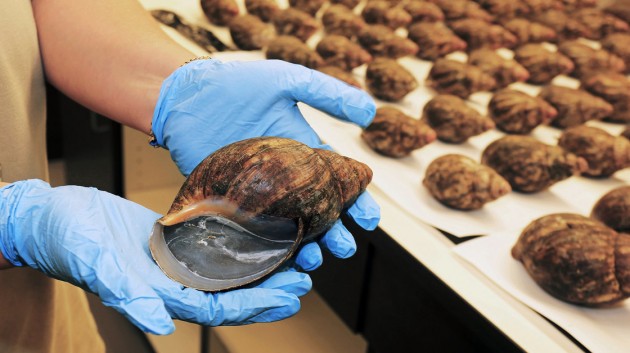 One of 67 live African giant snails intercepted July 1, at Los Angeles International Airport in a shipment from Nigeria. Intended for human consumption the snails are a major crop pest and banned from import into the United States. (Greg Bartman, United States Department of Agriculture)

Q: Should we be scared?

Strong: Not unless you eat these snails raw or undercooked. Giant  African snails carry a parasitic nematode that can be a vector for meningitis in humans. The snail acts as an intermediate host between the parasite and its natural final host in rodents.

Q: Have you ever eaten one?

Strong: I have not eaten them. I have eaten other kinds of snails but not African giant snails.

Q: Is it safe to say that one snail species tastes pretty much like another?

Strong: Among the African peoples who have a tradition of eating achatinid snails, the two species preferred are the giant West African snail (A. marginata) and the giant African snail (A. achatina). The giant East African snail (A. fulica), the most destructive of these species, is not considered as a desirable food item. Different snail species probably taste slightly different; some are more muscular than others so they will have a different texture or may be more or less rubbery. A lot depends on how you prepare them. Lots of snails are used for food. That is one of the ways they are introduced to new countries. 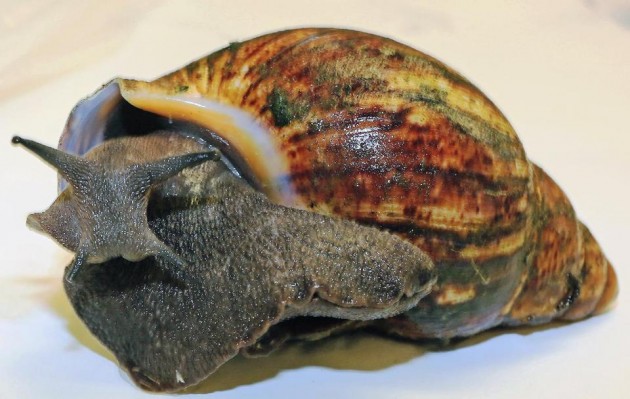 Strong: Giant East African snails are the most destructive and they eat hundreds of different kinds of plants so they are a huge pest of agricultural crops. Voracious and large they can eat and eat and they are not very selective. This is the main reason giant East African snails are on the list of the top 100 invasive organisms prohibited in the United States. They have even been known to damage stucco by grazing on it. I’m not sure what it is about stucco that appeals to them, but it is probably the lime as a source of calcium. Calcium is a limiting nutrient for many land snail species.

Q: It took 10 years for Florida to eradicate the first invasion?

Strong: Yes. As with other land snails, each giant East African snail has both male and female reproductive parts, and it only takes one gravid snail to lay hundreds of eggs and establish a new population in a short time. Each giant snail can live as long as nine years, with some living more than 10 years. It has also become established on islands of the Caribbean and the Pacific.

Q: What else eats them other than humans?

Strong: Not much. In their natural range in Africa, they are eaten by birds, cats and of course humans. Most things that eat them feed on the young and before they get large and slimy. They produce large quantities of mucus, which can be a deterrent to predators. One animal that will eat their eggs and young is another snail, called the rosy wolfsnail (Euglandina rosea), a native of tropical North America which is a specialized snail-eating snail. This snail was purposely introduced to Hawaii and other Pacific Islands to try and control introduced populations of the African giant snail. Instead it set its sights on native species of land snails and has ended up being a big problem for the native land snails of Hawaii, eating them rather than its intended target. The rosy wolfsnail has caused the extinction of numerous native species of snails.

Q: Do land snails require access to water to stay moist and produce their slime trail?

Strong: They prefer tropical humid forests so they need moisture but they are not reliant on flowing water for survival or reproduction. Mucus can be a defense but it also helps with locomotion. The mucus trail they secrete helps them glide over surfaces and is protection against abrasion. The part that protrudes out of a snail’s shell is the head and the foot. The foot is the large muscular part that they glide over the ground with. Pretty much the entire sole of the foot that is in contact with the ground has abundant cells that produce mucus. The side of the foot and head have fewer mucus cells that also produce mucus, preventing the snail from drying out.

Q. The shell grows as they grow?

Strong: Yes. In any snail that has a spirally coiled shell, the shell increases in size by accretion at the opening. It is gradually adding, gradually incrementing at the opening as it grows. So, a snail’s shell is a record of the entire life of that snail. The very tip of the snail’s shell is the shell it had as a hatchling and it has incrementally grown in a spiral shape as it has gone through life. African snails reach sexual maturity in less than a year and the shells grow slower after that, but never stop growing.

Strong: Snails have a special kind of ribbon in their mouth called the radula and it’s a flexible ribbon that has teeth on it. They use this long ribbon with these little abrasive teeth to scrape against the substrate to collect food. It would be analogous if the papillae of our tongues were elaborated into tiny teeth. So it uses this little tongue to scrape and jaws to snip off pieces of plant material. –John Barrat