In 2009, during an expedition by a Russian research ship, a small length of yellow flesh about 5 centimeters long was dredged up from the Romanche Trench in the Equatorial Atlantic near South America. It was collected at a depth of 5,560 meters. Close study revealed the object was the front half of an obscure acorn worm Glandiceps abyssicola, last collected in 1873 in roughly the same region by scientists aboard the steam-assisted sailing ship HMS Challenger. This original specimen of G. abyssicola ended up in a lab in Germany and was destroyed by bombs during World War II. 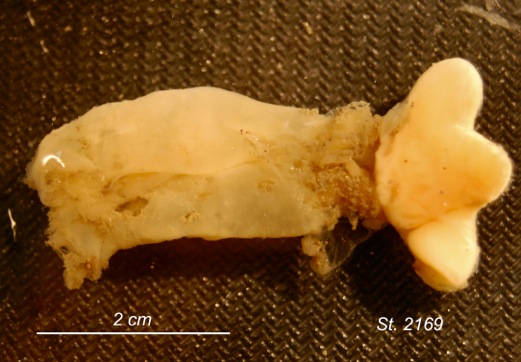 The rediscovery of this deep-sea acorn worm was recently announced with a detailed augmented description in the Journal of the Marine Biological Association of the United Kingdom. One of the co-authors of the paper is Karen Osborn, worm specialist at the Smithsonian’s National Museum of Natural History. Here, Osborn answers a few questions for Smithsonianscience.org about this mysterious deep-sea creature.

Q. Why is this worm called an acorn worm?

Osborn: The proboscis looks like an acorn sticking off the worm’s front end and the collar that surrounds it looks like the cap of the acorn. But then there’s this worm attached to it, so that kind of blows the whole idea that it resembles an acorn.

Q: In both 1873 and 2009 deep-sea dredging collected only the forward half of each of these two worms. Why is that?

Osborn: These worms are delicate. They don’t have much musculature and no hard skeleton. Both were collected at about 5,000 meters down. The metal dredge drags across the bottom of the ocean and a chain knocks everything on the top layer into a net…not exactly a gentle collecting technique. Delicate things are pretty unlikely to come up in any recognizable state, so we were actually lucky to have gotten these two worms in as good a shape as we did. 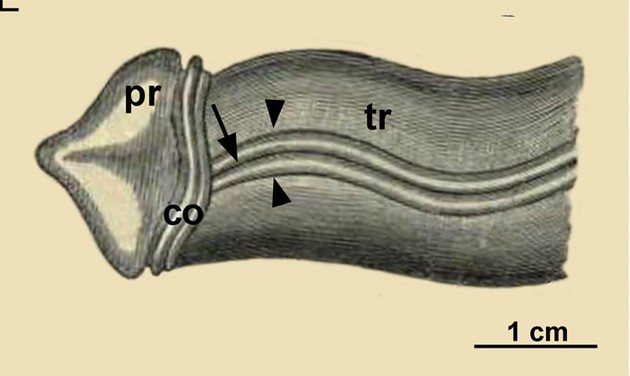 Illustration of the first specimen of G. abyssicola taken from a scientific paper printed in 1885.

Osborn: I have no clue. The colors of the other worms we are working on, known as the Torquaratoridae, are bright purple, bright pink, bright red, and there are also some white ones, brown ones and some really colorless ones that are almost transparent. A lot of them have substantial pigmentation but what the function of that pigmentation is…. we have no idea.

Color helps us identify them but certainly there is not enough light down where they live for anything to be able to see their colors. I would guess the color might be a byproduct of some kind of compound that makes some acorn worms taste and smell bad. Some acorn worms produce bromide compounds that make them taste bad so other creatures don’t eat them.

Q: What do they eat?

Osborn: Their mouth is located right at the junction between their proboscis, that acorn shaped piece, and the collar that goes around it, and they basically produce a lot of mucus that picks up particles—soft, flocculent organic matter—that has settled on the sea floor. You can see where they have passed because they leave a little trail where the top layer of sediment has been skimmed off. There is some indication that they are selectively picking up individual particles, but that remains to be determined for individual species. 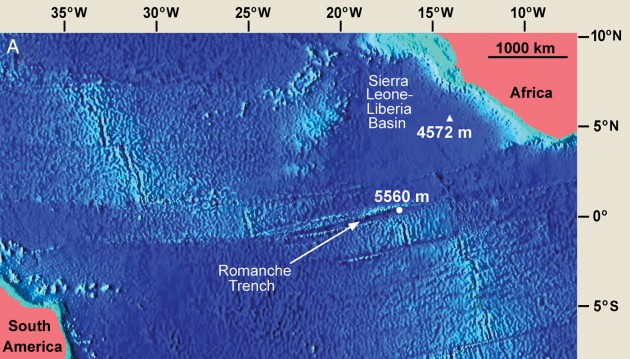 Q. Is the rediscovery of Glandiceps abyssicola big news in acorn worm circles?

Osborn: Yes, it is actually very cool because we are doing genetic work on these worms and we were really excited to be able to include this species in our study. G. abyssicola was the first of 11 species of deep-sea acorn worms that have been described so far and to find a second specimen 140 years after the first was discovered allows us to determine where it fits in the evolutionary history of the group. It was awesome because we assumed the chances of anyone collecting this worm again were very poor given its depth and delicacy.

Q. What else can you tell us about acorn worms?

Osborn: They are found pretty much all over the world. Most of the named species come from shallow water. Prior to our discoveries in the deep sea, it was assumed that most acorn worms lived in burrows but most of the deep sea species actually live out on the surface of the seafloor, crawling around to feed on the surface sediment. Some even drift around the deep sea in the currents. G. abyssicola is not very muscular so I would expect they are pretty slow moving like the other deep sea acorn works we’ve found. It’s also about 3 degrees Celsius at the depth where they live. A little colder than your refrigerator.

Q. Do deep-sea worms, adapted to the high pressure of the deep ocean, differ in morphology in any significant way from shallow water worms? Could they survive on the ocean’s surface?

Osborn: They differ dramatically from shallow water animals: their bodies are substantially larger in every dimension except length and their tissues are extremely delicate and lacking in musculature.  They would be torn up on the ocean surface because there is too much water movement and shear. Deep sea organisms seem to be more adapted to other features of their environment than the pressure, such as temperature, the type of food available, etc. –John Barrat