Mention coral reefs and images like snorkeling, tropical fish and sunny island getaways pop to mind. Vacation packages are not being offered, however, for many of the destinations Smithsonian taxonomist Stephen Cairns visits to gather the cold-water corals that are his specialty. And forget about snorkeling, these coral live where it is very deep and very dark.

Awareness of cold-water corals is growing but remains surprisingly low among the scientific community and is almost non-existent in the general public, Cairns says. Here Smithsonian Science asks Cairns, whose laboratory is in the National Museum of Natural History in Washington, D.C., more about these often overlooked marine invertebrates. 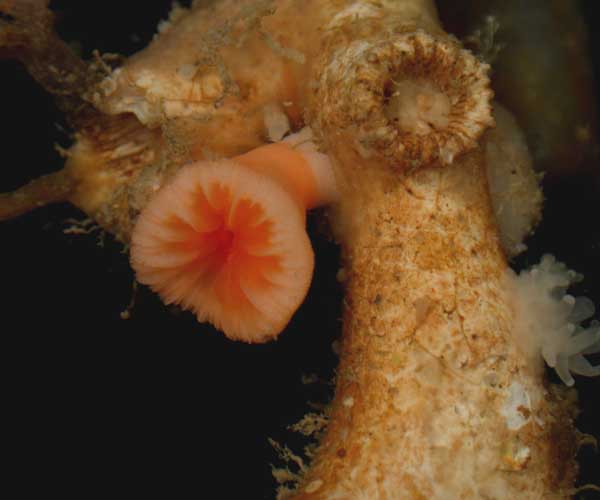 Deep-water solitary coral from off the coast of Georgia. (South Carolina Department of Natural Resources photo)

Q. What is the main difference between cold-water corals and tropical corals?

Cairns: Tropical corals live in symbiosis with dinoflagellates, which are plant-like protozoa, so they need light. (The coral doesn’t need the light but the dinoflagellate does.) This restricts reef coral to shallow water and to warm water at that. Deep, cold-water corals don’t have this symbiosis so they are free to live in cold water and water with no light.

Dinoflagellates help coral reefs grow faster and grow larger. The average cold-water coral is the size of a dime whereas the average reef coral is breadbasket size.

Another main difference, again, is that most cold-water corals don’t live in colonies but are solitary. 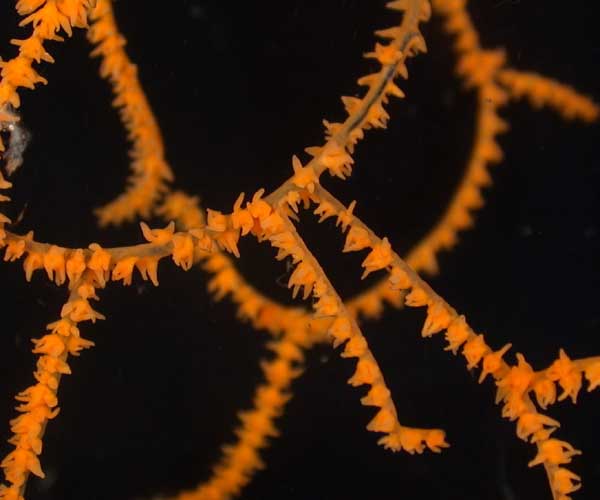 Q: How do you study something so small that lives so deep in the ocean?

Cairns: One thing that is frustrating for me, and it happens almost every day, is that somebody will send me a picture of a living coral and ask me what it is. For the most part I can’t tell them because I rarely see the coral I study alive, they are so deep in the ocean. But I don’t have to see the corals down deep for what I do.

I collect specimens by manned submersible and by trawling from a large oceanographic vessel. I put a net over the back that is maybe 20 to 30 feet in mouth diameter and hope it hits and stays on the bottom as the boat drags it. If I am lucky, it comes up with some corals and whatever else is down there. As a taxonomist I need to put the specimen under a microscope and count things and compare it to other known species. I am almost like a paleontologist in this regard. I just need the specimens.

I’ve named about 500 new species in a career spanning 40 years. There are so few people who study cold-water corals that it has been easy for me to name new species. 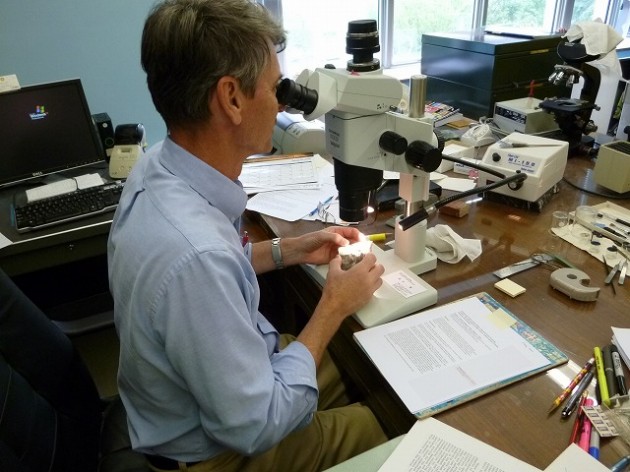 Stephen Cairns in his office at the National Museum of Natural History.

Q: Where do cold-water corals live?

Cairns: All over the world from the Arctic to the Antarctic. They need water that has lots of nutrients and a hard substrate to cling to–it could be a grain of sand or another dead coral of the same species. You won’t find many out in the middle of the ocean because of the depth, since deeper than 13,123 feet is too deep for most corals.

New techniques in acoustic seabed mapping have revealed a previously unknown density of cold-water coral reefs and coral carbonate mounds in some area of the ocean floor. Still, understanding the global distribution of deep, cold-water corals remains very limited by the lack of information in many deep-sea areas. 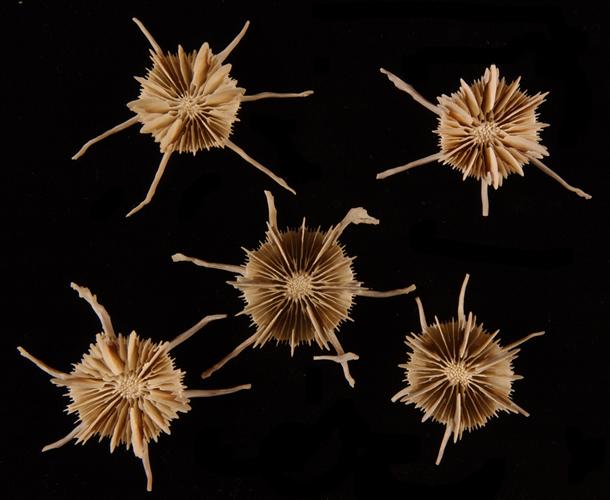 Q. What impact might global warming have on deep-water coral?

Cairns: Global warming doesn’t really affect deep-water corals because it is warming the ocean from the top down. Ocean acidification, on the other hand, affects the ocean from the bottom up—the deeper water is more acidic—and this is an insidious threat to cold-water corals. As more carbon dioxide is pumped into the air and into the ocean the level [saturation horizon] of high-acidity water is rising from the bottom.

Alarmists say eventually this layer will rise to the surface and all coral and all calcium carbonate organisms will no longer be able to calcify their skeletons. Corals will still be able to exist in water with higher acidity because their skeletons are covered by tissue and are not exposed to this acid. As soon as a coral dies however, and the tissue sloughs off, the skeleton will dissolve. This is a problem for the maintenance of deep-water coral banks as this saturation layer moves higher. 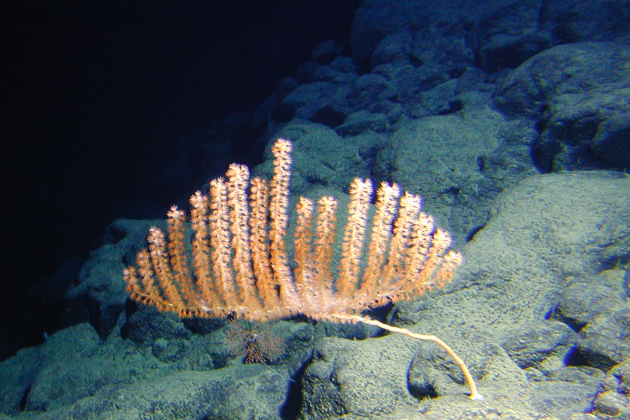 This orange bamboo coral is between four and five feet tall and was found 5,745 feet below the surface near Hawaii. (Credit: Hawaii Deep-Sea Coral Expedition/NOAA)

Q. Why are deep-water banks important?

Carins: Like warm-water coral reefs, cold-water corals that do colonize and create deep skeletal frameworks are significant engineers of underwater ecosystems on continental shelves, slopes, canyons, and seamounts across the globe. Deep coral structures, often thousands of years old, can accumulate tens of meters above the sea floor and provide niches for a diverse community of sea life. These include a mix of suspension feeders with many sponges, hydroids and bryozoans that settle and grow on exposed dead coral. In the Northeast Atlantic some 1,804 species have been recorded associated with habitats created by the coral Lophelia pertusa.

Q. Cold-water corals live in darkness yet some species are colorful. What purpose does their color serve?

Cairns: I don’t think the color serves any purpose. You are talking about tissue color but if you take the tissue off of the skeleton the coral skeleton is usually white because it is calcium carbonate like our bones. Sometimes, however, the skeleton is pink or black or various other colors. With the tissue attached, nothing can see underneath the coral tissue to the skeleton so there is no reason for that skeleton to have any color. Even if there were light down there you wouldn’t see the skeleton. So I’ve been perplexed about why there is color in the skeleton, as well as in the tissue. I’ve thought about this for a long time and there is no purpose that I can see. 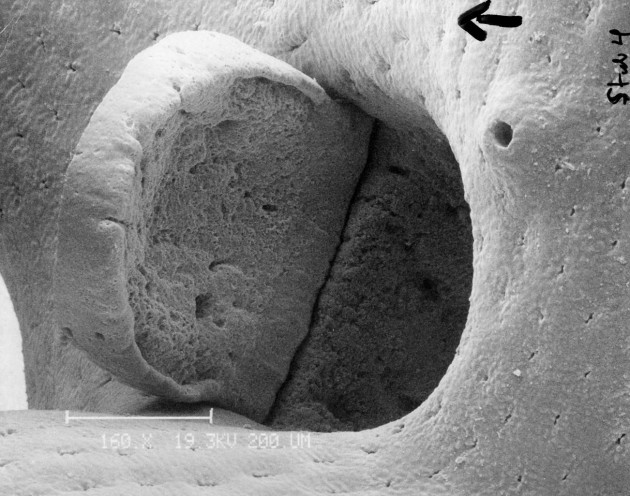 A scanning electron microscope image of the hinged opercula that covers the feeding polyp of the deep-water coral “Adelopora pseudothyron” Cairns, 1982. In most corals there are no moving skeletal parts. (Photo courtesy Stephen Cairns)

Q: Can you describe one of the most unusual cold-water coral species that you have named?

Cairns: One of the most unusual corals I have described is Adelopora pseudothyron Cairns, 1982, which is a stylasterid coral [also known as lace corals] that has tiny (less than 1 millimeter) hinged opercula that cover the tube in which the feeding polyp is located. In most corals there are no moving skeletal parts,so this is a real exception.