Researchers at the Smithsonian Conservation Biology Institute and partnering organizations will build a frozen repository of Great Barrier Reef coral sperm and embryonic cells. Genetic banks composed of frozen biomaterials hold strong promise for basic and applied research and conservation of species and genetic variation. Because the banked cells are alive, researchers can thaw the frozen material one, 50 or, in theory, even 1,000 years from now to help restore a species or diversify a population. Done properly over time, samples of frozen material can be reared and placed back into ecosystems to infuse new genes into natural populations, thereby helping to enhance the health and viability of wild stocks. 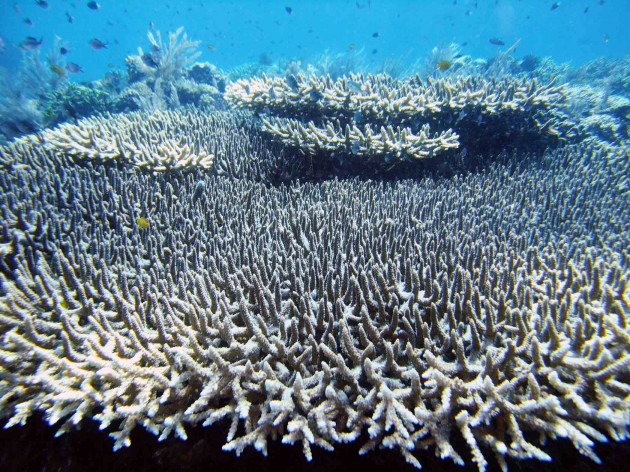 Researchers at the Smithsonian Conservation Biology Institute and partnering organizations are planning to create a frozen bank of coral sperm and embryonic cells from a Great Barrier Reef coral species similar to the table coral of the genus Acropora shown here. (Photo by: Michael Henley, Smithsonian’s National Zoo)

“It is crucial that we begin ex situ conservation on coral reefs while their genetic diversity is still high,” said Mary Hagedorn, a marine biologist at SCBI. “Although we hope we’ll never need to use these banks, the cost of not doing this work and subsequently losing valuable diversity and resources is too high.”

Hagedorn recently created the first frozen repositories for endangered elkhorn coral, Acropora palmate, and Hawaiian mushroom coral, Fungia scutari. Researchers have used these repositories to fertilize fresh coral eggs. SCBI is joining with organizations in the United States and Australia, including the Australian Institute of Marine Science, Monash University and the Taronga Zoo in Sydney, to freeze sperm and embryonic cells from the Great Barrier Reef’s staghorn coral, A. millepora. 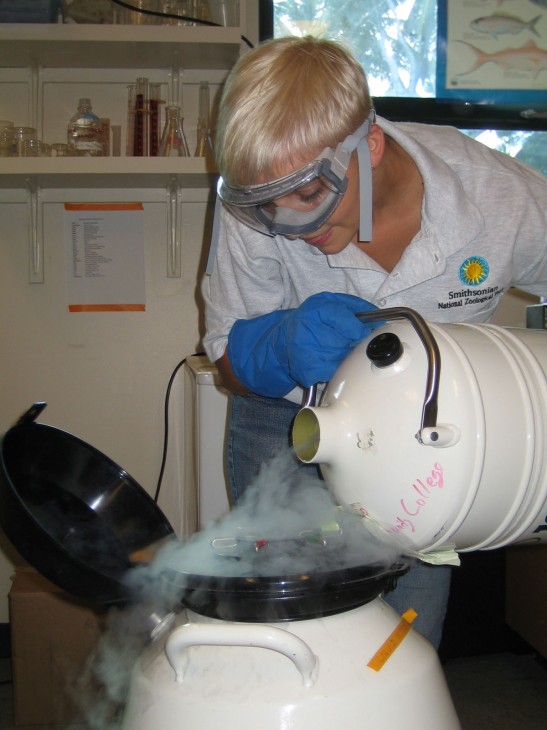 Coral reefs are living, dynamic ecosystems that provide invaluable services: they act as nursery grounds for marine fish and invertebrates, provide natural storm barriers for coastlines, purify carbon dioxide from the atmosphere and are potential sources for undiscovered pharmaceuticals. Yet coral reefs are disappearing rapidly as the result of pollution from industrial waste, sewage, chemicals, oil spills, fertilizers, runoff and sedimentation from land, climate change, acidification and destructive fishing practices. Researchers believe that coral reefs and the marine creatures that rely on them may die off within the next 50 to 100 years, causing the first global extinction of a worldwide ecosystem in current history. According to the Pew Center on Global Climate Change, coral reefs generate up to $30 billion of the global economy each year, with more than $1 billion going to the Australian economy.

“The Great Barrier Reef is iconic and of vast importance in terms of biological diversity and species richness,” Hagedorn said. “A frozen repository will help ensure its incredible diversity and prevent future extinctions.”

While scientists have successfully used frozen sperm from coral to fertilize fresh coral eggs, their next focus is on developing techniques to use frozen coral embryonic cells to help restore coral populations. This research will play a large role in helping to conserve the Great Barrier Reef, which stretches 1,800 miles along the Queensland coast of Australia and includes the world’s largest collection of corals.