Springtime in Australia means balmier weather, but the Great Barrier Reef’s future may depend on subzero temperatures. Researchers from the Smithsonian Conservation Biology Institute, Hawaii Institute of Marine Biology and other partnering organizations spent two weeks at the end of November collecting sperm and embryonic cells during spawning from two species of coral and have built the first frozen repository for the Great Barrier Reef that could someday restore a coral species or diversify a population. 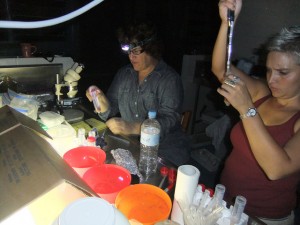 “It turns out we can produce significant numbers of developing larvae using the thawed sperm and that those larvae actually settle,” said Mary Hagedorn, a marine biologist at SCBI. Coral settling is the process in which a free-swimming, bowling pin-shaped coral larva metamorphoses into a single polyp baby coral. “This is a huge milestone for us because if the larvae couldn’t metamorphose and settle, we wouldn’t be able to successfully use the bank for conservation efforts, which is the driving force behind this important research.” 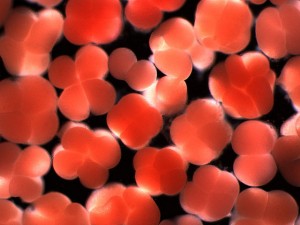 Image left: Larvae of the coral Acropora tenuis. (Photo courtesy A. Hayward and A. Negri, Australian Institute of Marine Science)

The new frozen bank includes two reef-building species of coral, Acropora tenuis and A. millepora, both of which now reside in long-term storage at the Taronga Western Plains Zoo in Dubbo, Australia. Hagedorn has already successfully applied this technology to reefs in the Caribbean and Hawaii. Though they remain alive, the banked cells are in a stasis and researchers can thaw the frozen material in one, 50 or, in theory, even 1,000 years from now. Done properly over time, researchers can rear samples of frozen material and, if necessary, place them back into ecosystems to infuse new genes into natural populations, helping to enhance the health and viability of wild stocks. The work is the result of a partnership between SCBI, Hawaii Institute of Marine Biology, Taronga Conservation Society Australia, Australian Institute of Marine Science and Monash University. 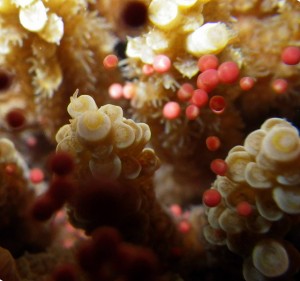 Coral reefs are living, dynamic ecosystems that provide invaluable services: they act as nursery grounds for marine fish and invertebrates, provide natural storm barriers for coastlines, store carbon dioxide from the atmosphere and are potential sources for undiscovered pharmaceuticals. Yet coral reefs are disappearing rapidly because of pollution from industrial waste, sewage, chemicals, oil spills, fertilizers, runoff and sedimentation from land; climate change; acidification; and destructive fishing practices. Researchers believe that coral reefs and the marine creatures that rely on them may die off within the next 50 to 100 years, causing the first global extinction of a worldwide ecosystem since prehistoric times. According to the Pew Center on Global Climate Change, coral reefs generate up to $30 billion of the global economy each year, with more than $1 billion going to the Australian economy. The Great Barrier Reef, which stretches 1,800 miles along the Queensland coast of Australia, includes the world’s largest collection of corals. 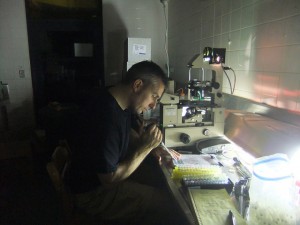 “The wildlife on the Great Barrier Reef is so fascinating, and the size and beauty of that reef is legendary,” said Mike Henley, an animal keeper in the Zoo’s Invertebrate Exhibit. Henley helped collect and freeze the Australian samples. (Read Henley’s update from the field on the Zoo’s website.) “Our colleagues at the Australian Institute of Marine Science were so very wonderful to work with, and their facility is state-of-the-art, making research and larval care easier than at any location I have ever worked before.”

While scientists have successfully used frozen sperm from coral to fertilize fresh coral eggs, their next focus is on developing techniques to use frozen coral embryonic cells to help restore coral populations. In January, Hagedorn and her collaborators will focus on culturing frozen embryonic cells to see how long they can live.

“Right now there are no tools to help address some of the diseases most devastating to the reef,” Hagedorn said. “If we can grow embryonic cells and keep them alive, this technology could be important in battling those coral diseases.”