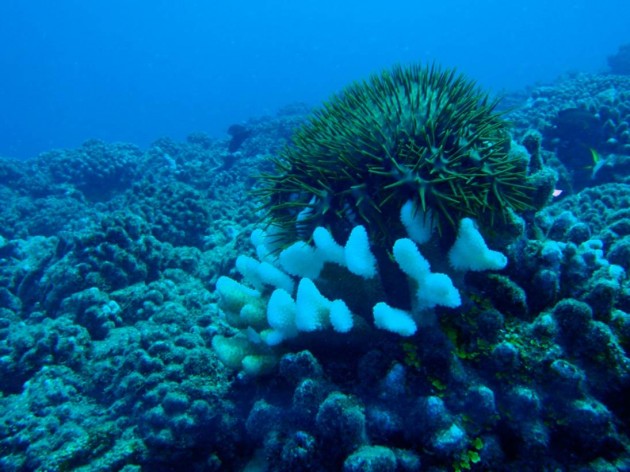 Imagine sitting down at your favorite restaurant when something under the table begins painfully pinching and snipping at your toes. This is basically how T. flavopunctata crabs in French Polynesia defend their coral hosts from the large and lethal Crown-of-Thorns sea star (Acanthaster planci).

Long before a sea star can begin eating a coral, T. flavopunctata living inside the coral emerge and begin pinching the sea star’s tube-like feet, shaking them and nipping them off. “Basically, they annoy the sea star until it goes away,” says Jenna Moore from the Florida Museum of Natural History, who is also a predoctoral fellow at the Smithsonian’s Natural Museum of Natural History. 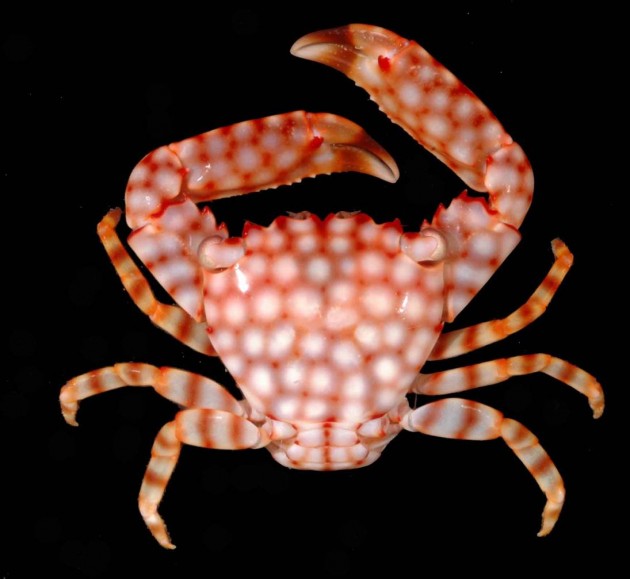 When scientists removed the largest species of the guard-crabs, “Trapezia flavopunctata” (shown here), from the path of an army of predator sea stars, the effects were dramatic; corals without guard-crabs, or with other species of guard-crab, were eaten—usually overnight. (Photo courtesy Seabird McKeon)

The crabs are not only defending their home, the coral is also their restaurant. Coral keep T. flavopunctata crabs and other crab species happy with fatty deposits they produce in the tips of their tentacles that the crabs snip off and eat.

In a recent study in French Polynesia, Moore and Seabird McKeon, a scientist at the Smithsonian’s Marine Station in Fort Pierce, Florida, learned that to stay safe and sound, a coral needs a variety of crabs of various species and sizes to defend it against predators both large and small. Details from this study are published in the Sept. 30 issue of the open-access journal, PeerJ.

“We found that diversity in both species and size of coral guard-crabs is needed to adequately fend off coral predators,” McKeon says. “It is an example of how biodiversity is crucial to conserving reef environments and the essential resources they provide for thousands of species, including humans.” 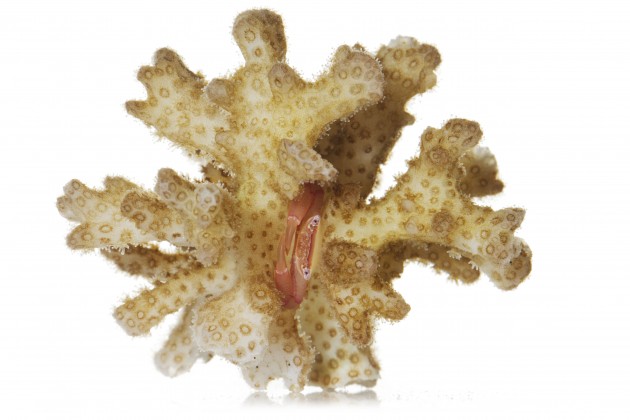 A crab inside its coral home. Coral guard-crabs across the Indo-Pacific live in and fiercely defend coral reefs against predators in exchange for shelter and nutrition that the corals secrete. (Image copyright David Liittschwager)

For example, while crabs of the species T. flavopunctata were staunch defenders against Crown of Thorns sea stars, they ignore a much smaller threat, the sea snail Drupella. Enter the smaller guard crab species T. serenei, which takes up the fight against encroaching snails. McKeon and Moore studied three species of crabs known to protect coral in a series of experiments to examine the effectiveness of different species and various sizes of crabs at repelling multiple coral predators.

In one trial, the research team removed T. flavopunctata from corals in the path of the sea stars. The results were dramatic; corals without T. flavopunctata crabs were eaten—usually overnight.  (To eat, a sea star must invert its stomach and drape it over a coral head. It then secretes digestive enzymes that dissolve the coral tissue and allow its stomach to absorb them.) 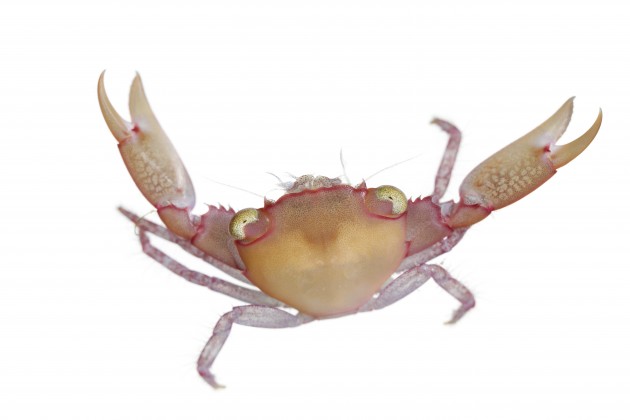 Small and large crabs belonging to “Trapezia serenei”(above) proved to be effective coral defenders against a range of predators; the smaller crabs protected the coral from Drupella snails while the larger crabs honed in on mid-sized sea stars. (Photo copyright David Liittschwager)

“Seemingly small differences among crabs guarding their coral homes can have big effects on coral survival,” Moore says. “Not only does the level of protection provided vary by species, but the smallest crabs were defending the coral from coral-eating snails, a threat that larger crabs ignored.”

Multiple species of crabs live inside a coral in monogamous male-female pairs. Only one pair of the same species resides in each coral and they will fight off others of their same species that intrude on their territory. “They don’t like to live in the same coral host with the same species unless they are a mated pair,” Moore says.

Moore and McKeon concluded that multiple lines of defense are a direct result of guard-crab diversity and are necessary to keep coral reefs safe long-term.