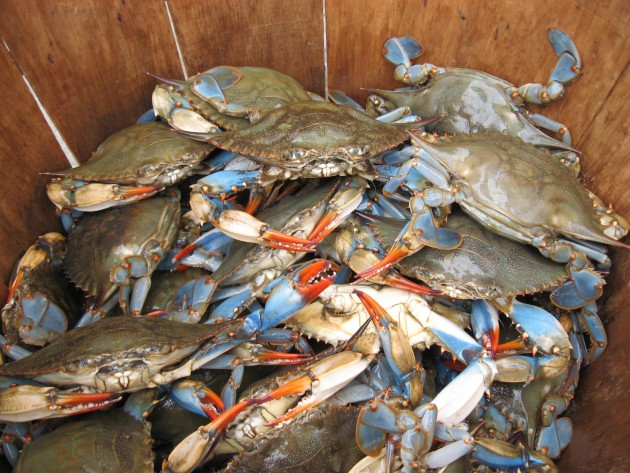 The results are in, 2016 is going to be a good year for blue crabs in the Chesapeake Bay. An iconic figure embedded in the culture and cuisine of the Chesapeake Bay area, the blue crab (Callinectes sapidus) sustains the most profitable fishery in Maryland and supports thousands of fishermen and seafood businesses in Maryland and Virginia. Based on the annual winter survey conducted by the Maryland Department of Natural Resources and the Virginia Institute of Marine Science, there are nearly 35 percent more blue crabs in the Chesapeake Bay this season than there were in 2015. That’s good news, especially on the heels of a 38 percent increase the previous year.

But scientists say there is a cautionary tale in this rapid rise. Twenty seven years earlier, the Chesapeake Bay blue crab fishery was on the brink of collapse, and the population has been on a yo-yo ride ever since. Good years like 2016 inevitably get crabbers and crab-lovers excited by the notion that crabs have recovered and fishing restrictions can be loosened.

“I wouldn’t recommend that,” says Anson Hines, an expert in blue carb ecology and the director of the Smithsonian Environmental Research Center in Edgewater, Md. According to Hines, it’s not time to claim victory, recovery is still over the horizon. “Everybody has been working very hard to help the blue crab population recover. It’s up and that’s good news, but it’s a population that fluctuates a lot intrinsically, and it’s been at very low levels for a good period of time.” 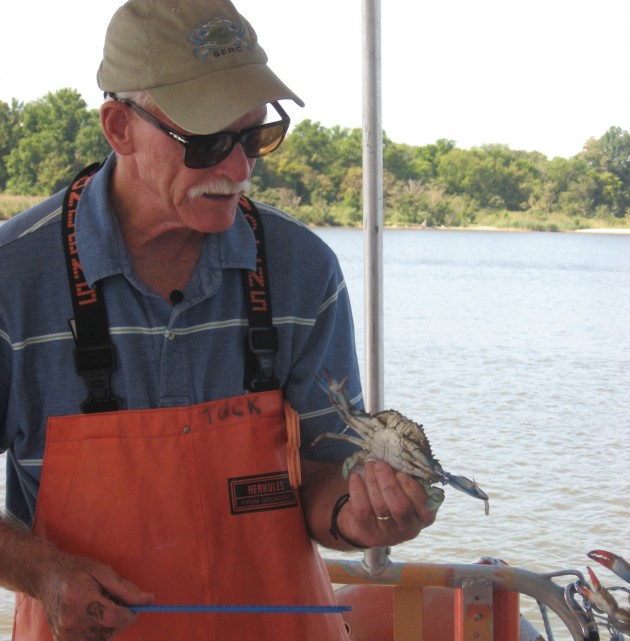 Four decades ago, half of all the blue crabs caught in the U.S. came from the Chesapeake Bay, one of the most productive estuaries in the world. That level of harvesting proved unsustainable, and today, the Bay doesn’t even supply enough blue crabs for its immediate area. The void has created a silent market for crab from half-way around the world. A 2015 study found that 48 percent of all crab cakes tested in Maryland and Washington, D.C. were made with crab species from the Indo-Pacific and the Mexican Pacific coast. Nearly half of the species found in the crab cakes were listed as species to “avoid” on seafood guides because they are harvested with unsustainable practices that are harmful to the ecosystem. Clearly, the decline in such an economically important species has had far-reaching ripple effects.

Blue crabs are caught both recreationally and commercially in the Chesapeake Bay, but commercial fishing is by far the greatest cause of blue crab mortality. During summer and autumn, female crabs migrate to the lower part of the Bay to spawn. Each female produces an average of three million larvae per brood and can produce three to five broods per season. The larvae migrate out to the ocean as far as the continental shelf. On their return to the Bay, juveniles find shelter and protection in shallow tributaries which serve as nursery grounds. During the winter, adults and juveniles bury down into the muddy bottom and lie quiet until spring. 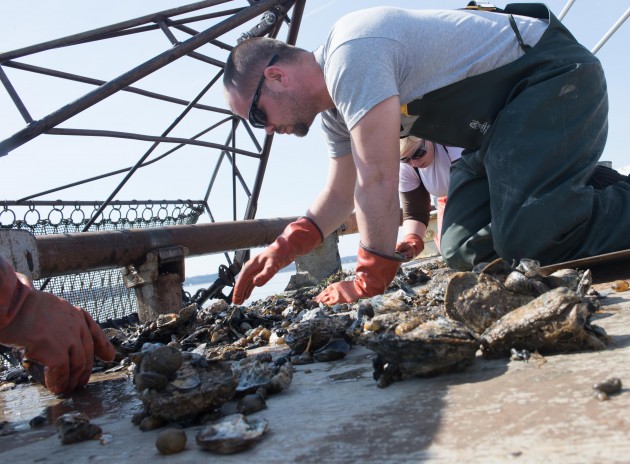 A scientist counts blue crabs during the annual winter dredge survey conducted by the Maryland Department of Natural Resources and the Virginia Institute of Marine Science. This survey produces an annual estimate of the number of crabs over-wintering in the Chesapeake Bay and the number of young crabs entering the population. (Image courtesy Maryland Department of Natural Resources)

The survey that was released recently is based on a sampling of those crabs dredged up from 1,500 sites throughout the Bay. The results of the survey are used to estimate the number of crabs overwintering across the Bay and to predict the total population for the coming spring and summer season. Since the survey began in 1988, the population of blue crabs has spiraled downward from more than 800 million crabs to fewer than 300 million by 2000. The numbers stayed low and hit a record low of 252 million in 2007. The following year, fisheries managers prohibited winter dredge harvesting which removes large numbers of female crabs. Finally things began to change.

During the worst years of the decline, the Smithsonian’s Hines and his colleagues from the University of Maryland had been conducting research on blue crab migration and the impacts of fishing when they made a critical discovery. “We found that they were recruitment limited,” Hines says. That is, not enough baby crabs were making it up the Bay into the nursery grounds. In addition, research from the Virginia Institute of Marine Science revealed a dangerously low number of spawning females in the lower Bay. “Clearly if you don’t have enough females producing enough larvae to recover the population it’s a major problem, and that’s what happened in the 2000s,” Hines says. These research findings led to a prohibition on winter dredge harvests. Other fishing regulations were established to allow more female crabs to survive and spawn.

According to the recent survey, projections for the number of spawning females nearly doubled from 2015’s 101 million to 194 million. The overall number of crabs in the Bay has reached 553 million, but we’ve been here twice before. A spike in 2010 brought the population to 663 million, only to be followed by a low of 452 million the following year. In 2012, crab numbers soared to 765 million, but crashed to a near-record low of 297 million in 2014.

What Hines and others watching the blue crab population closely are looking for is a consistent increase in crab abundance over many years. A two-year uptick doesn’t meet that criterion, but Hines is cautiously optimistic, “This is a very positive sign. It means the population can recover if we can keep up the success.”