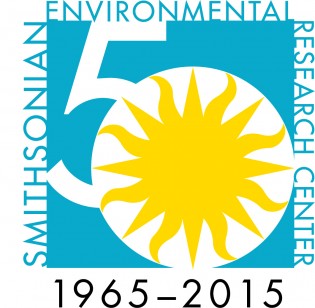 The world’s coasts are home to more than 70 percent of the human population and experience intense development as a result. The rate of environmental change in these areas is accelerating at a rapid pace. What are the consequences? Are there solutions? These are the questions the Smithsonian Environmental Research Center has been answering for 50 years.

It all started with a simple bequest to the Smithsonian of a defunct dairy farm on Maryland’s Rhode River―a tributary of the Chesapeake Bay. Scientists were able to look past the dilapidated buildings on the 368 acres to see the property’s potential for environmental research. And so in 1965, the Chesapeake Center for Field Biology was officially established. 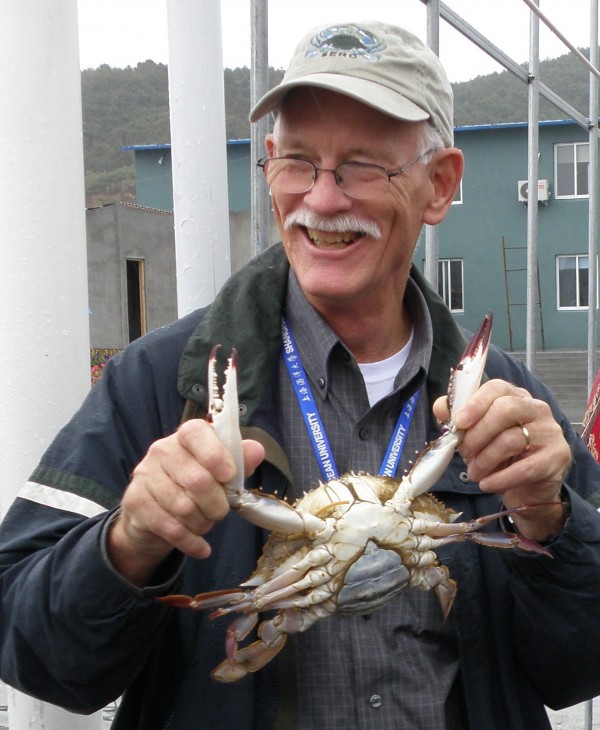 SERC Director Tuck Hines holds a female blue crab. SERC’s collaborative research with other scientists was critical to reversing a population decline of the crabs in the Chesapeake Bay. (Credit: SERC)

The next 20 years brought land acquisitions, labs and offices, a resident staff of scientists, and a couple of name changes. In 1985, the site became the Smithsonian Environmental Research Center (SERC).

Now 50 years after it began, SERC has expanded its property to 2,650 acres and its research to focus on the most pressing issues affecting the planet’s coastal ecosystems, including: 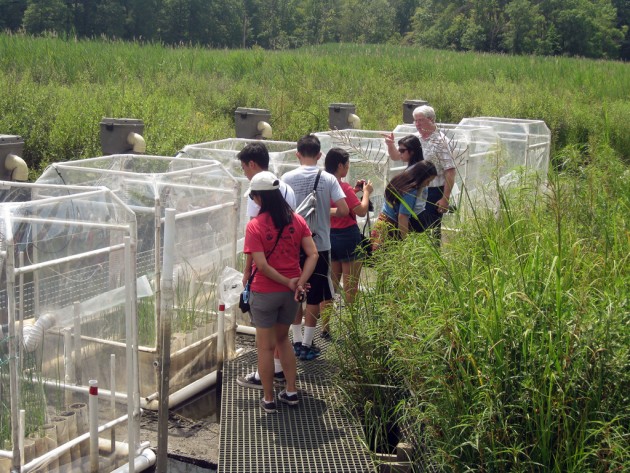 “When I arrived in 1979 as a young marine ecologist, SERC was a relatively small operation trying to tackle huge environmental issues,” said SERC Director Tuck Hines. “Today, our research has expanded far beyond the Chesapeake and has led to solutions and policy changes for acid rain, nutrient and mercury pollution, land use, overfishing and climate change.”

Saving the Symbol of the Chesapeake

SERC research has had life-saving impacts, especially for one of the Chesapeake’s most emblematic creatures: the blue crab. In the 1990s, crab populations in the Chesapeake inexplicably plummeted. Fortunately SERC had been tracking blue crabs since 1981. Scientists discovered that since 2000, there weren’t enough females left to spawn and sustain the population. Meanwhile, up to 80 percent of Virginia fisheries’ catch and nearly half of Maryland’s catch were females. Based on SERC’s collaborative findings with other Bay scientists, both states reduced their female harvest in 2008 and the next two years saw a sharp rebound in Bay blue crabs. 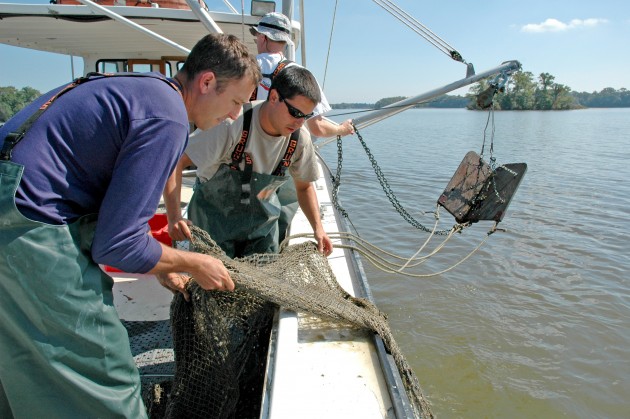 Former postdoc Eric Johnson (left) and SERC biologist Rob Aguilar trawl the Rhode River for blue crabs so that they can monitor their population and health. (Credit: SERC)

Stopping Invaders in Their Tracks

Many at SERC research invasive species. It was SERC scientists who confirmed the first Chinese mitten crab sightings in the U.S. Atlantic and caught the first northern snakehead fish in the Rhode River. And while detecting invasive species early is important, preventing them from arriving in the first place is even more critical. That is why SERC, along with the U.S. Coast Guard, runs the National Ballast Information Clearinghouse, which requires every major cargo ship entering U.S. waters to report how it treats its ballast water to reduce delivery of marine invaders. 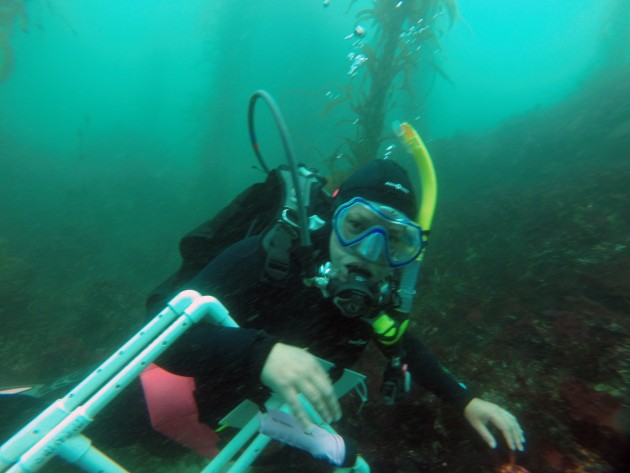 SERC diver Lina Ceballos helps conduct surveys of the rocky reefs off central California’s coast to determine where, when and how introductions of non-native marine species occur and how they spread along the west coast. (Photo by Michelle Marraffini)

How will Earth’s ecosystems react to future climate change? SERC has been finding out since 1987, when it began what is today the world’s longest-running field study on the effects of atmospheric carbon dioxide (CO2) on plant communities. Scientists placed chambers in a marsh and a scrub oak forest, raising CO2 concentrations to twice that in the atmosphere―in effect, trying to grow plants in the atmosphere of 2100. Within a decade the experiments revealed that plants could absorb at least some of humanity’s surplus CO2. 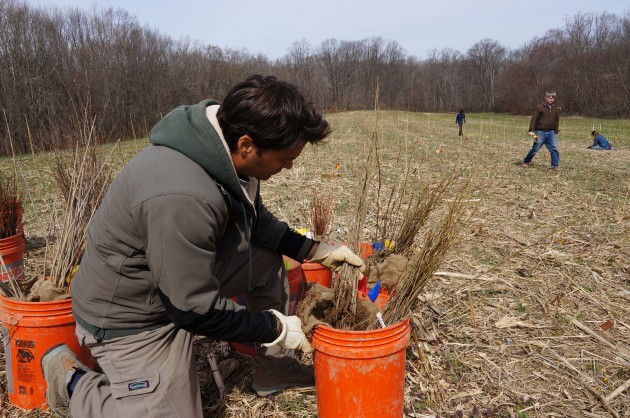 Smithsonian ecologist John Parker examines just a few of the 24,000 tree saplings that will one day turn this Maryland cornfield into a mature forest. During the next 100 years, Smithsonian scientists will examine how varying levels of species diversity affects the forest’s development and how it reacts to climate change.(Photo by John Gibbons)

“If we can find out how much carbon plants use and store, we can better understand what the future may look like,” Hines said. “That’s what we do at SERC―we offer a better understanding of what’s happening and what will happen, so we can meet the environmental challenges of the 21st century.” 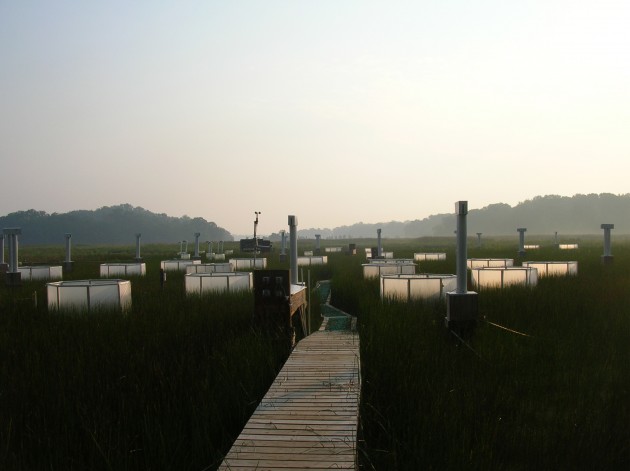 Scientists use chambers in SERC’s Global Change Research Wetland, raising CO2 concentrations to twice that in the atmosphere to see how plants may react in the atmosphere of 2100. It is the world’s longest-running field study on the effects of atmospheric CO2 on plant communities. (SERC photo)

In 1965 SERC used old barns for labs; last year SERC opened its LEED-platinum designed Mathias Lab. “We’ve come a long way, but we’re far from done” said Hines. “New challenges await in the next half-century, but our 50-year history shows tremendous power to catalyze success for the sustainable future of the planet.”