The world is full of parasites that can force their hosts to do strange, even suicidal, things. But very few can functionally switch an animal’s gender. One such parasite lurks in Chesapeake Bay: an invasive barnacle that hijacks a mud crab’s reproductive system and impregnates it with parasite larvae—even if the crab is male.

Image above: A mud crab infected with parasites. The sacs on its abdomen contain thousands of parasite larvae the crab will later release into the water.

The invasive parasite Loxothylacus panopaei (Loxo for short) is a type of barnacle, but looks and acts nothing like the typical barnacles growing on rocks along the shoreline. Loxo has a highly evolved life cycle, essentially custom-made for acting as a crab parasite. As a free-swimming larva, Loxo resembles a typical barnacle larva. A female larva infects a recently molted crab by burying into its shell. Once inside, she undergoes a series of changes and assumes control over the host crab, dictating major functions such as molting and reproduction.

After a time Loxo grows into adulthood and forms small sacs (reproductive bodies) that emerge through the abdomen of the crab, usually after the crab molts. Once a free-swimming male Loxo comes along and fertilizes them, the sacs are filled with of thousands of larvae that are released into the water to seek out a new crab host. This process eliminates the crab’s ability to reproduce, resulting in the crab instead caring for the developing larvae of the parasite. If this weren’t bad enough, Loxo also compromises the crab’s immune system. Infection endangers both present and future generations of the mud crab.

Loxo are native to the Gulf of Mexico, the Caribbean and parts of Florida, and parasitize several species of mud crabs throughout the area. Scientists first discovered Loxo in Chesapeake Bay in 1964 on the native White-fingered Mud Crab (Rhithropanopeus harrisii), a tiny brown crab barely the size of a quarter. Mud crabs are easily transported with oysters, and Loxo likely entered the Chesapeake with mud crabs caught up in oyster shipments from the Gulf of Mexico. The parasite is now common throughout much of the Bay. 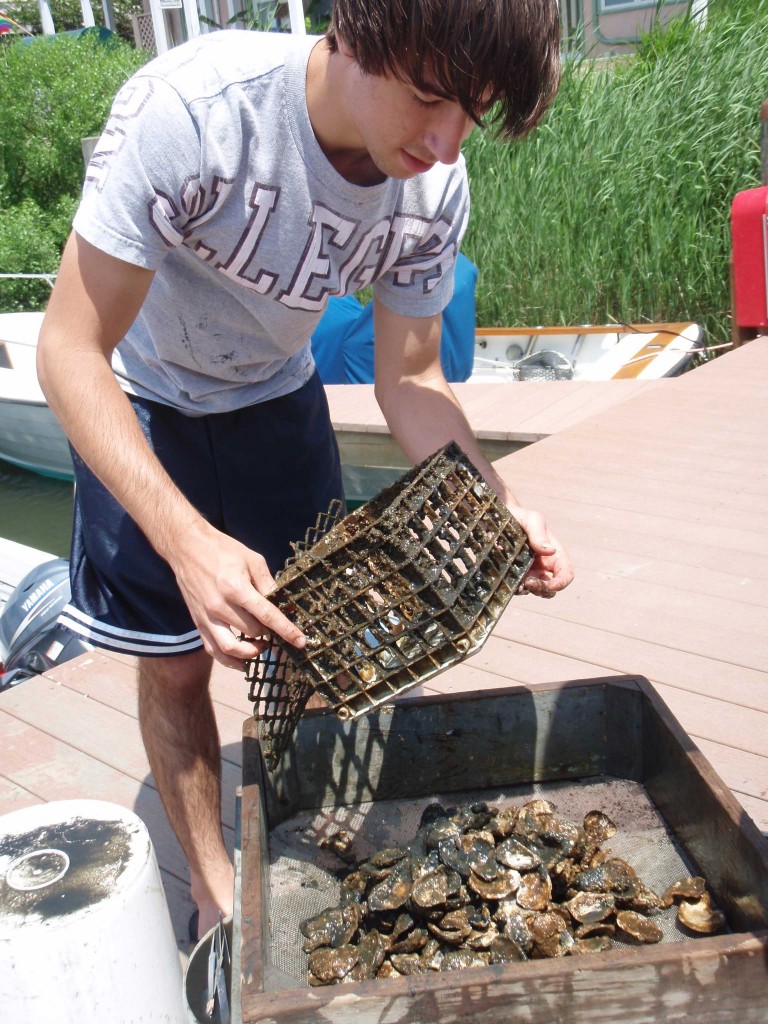 Biologists at the Smithsonian Environmental Research Center having been studying the prevalence of Loxo in the White-fingered Mud Crab since the 1990s, in hopes of understanding its overall impact on the population. Starting in 2003, Dr. Gregory Ruiz and others have collected mud crabs every summer from 10 sites in Maryland: near Queenstown, Centerville, Oxford, Aqualand (near the Governor Harry W. Nice Memorial Bridge), Combs Creek, Broomes Island, Harrington Harbor, Deale, Corn Island and SERC. At each site, they set out “crab condos”, or small plastic crates filled with dead oyster shells that sit beneath the water on the surface of the sediment. These crates stay in the water for two months, during which time mud crabs take up residence between the oyster shells. After two months, they pull up each crate and hand-collect crabs from the oyster shell habitat. Back in the laboratory, the crabs are measured, sexed and examined for outward signs of the Loxo parasite.

More recently Dr. Amy Fowler, a SERC post-doctoral fellow, uncovered another mystery. After examining data collected since 2003, she found that the Loxo parasite is very abundant some years and but nearly absent in others. Fowler suspects environmental changes—probably salinity and temperature—could be responsible for the trend. To further investigate, she is conducting experiments to determine why the population is fluctuating. These experiments should help her understand if temperature and salinity can impact various stages of the host and parasite, both independently and together.

Even if it’s too late to root out Loxo, Fowler and Ruiz’s research has another purpose. It turns out Loxo has a cousin: Loxothylacus texanus, a barnacle that currently resides in the Gulf of Mexico. L. texanus has the same castrating effect on the blue crab—a much larger crustacean crucial to the Bay’s economy and ecology. So far L. texanus hasn’t made it up to the Chesapeake. But ecologists are keeping a vigilant watch, because one castrating, gender-switching parasite in the Bay is quite enough.–Source: SERC Shorlines blog